Best way to work out angle between points?

I have the following JavaScript code to work out the angle between two points (clockwise). The code I have seems a bit "hacky" to me, as I have a while loop ensuring the number is not negative (to make the range 0-360), as well as I have to subtract 270 degrees to get it to work correctly. Is there a better way to do this?

First of all, let's define the problem precisely. According to your comment, this is the behavior you want:

You are correct in believing I am expecting it to be relative to 12 o'clock, and for it to move clockwise.

As evidenced by the comments, many people had problems understanding what you meant by the "angle between two points". That's a vocabulary problem. I suggest that you borrow a term from navigation: bearing. In this review, I'll use the term "bearing" to refer to your desired behavior: when point is taken relative to this, 12 o'clock is considered to have a bearing of 0°, with values increasing clockwise, up to 360°. I'll continue to use the term angle to refer to the erroneous behavior of your angle() function. 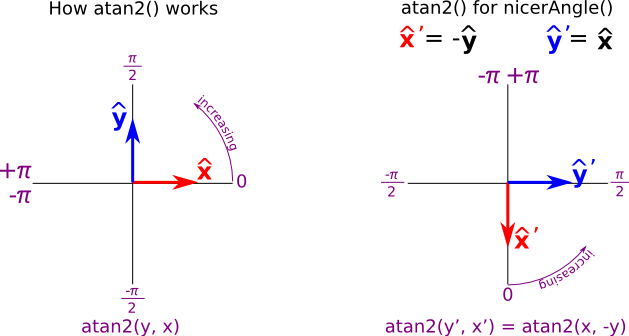 Here it is written out:

Note that your while loop can simply be an if conditional.

Note that Math.atan2() is guaranteed to return a value in the range [-Math.PI, +Math.PI]. (See footnote below.) We should now ask, is it possible to get rid of the conditional altogether?

One reason to get rid of the conditional is to reduce the number of code paths — fewer code paths means fewer cases to worry about in code-coverage tests. Another reason is performance — if the CPU can always execute the code sequentially, then it doesn't have to do branch prediction. When faced with a branch, CPUs speculatively execute code in advance, then throw away the results from the branch not taken. (That's true for a low-level language like C. It probably wouldn't matter at all for a naïve JavaScript interpreter. It might make a difference on a highly optimized JavaScript JIT. Anyway, the code-path-reduction argument alone should be a good reason to try to eliminate the conditional.) 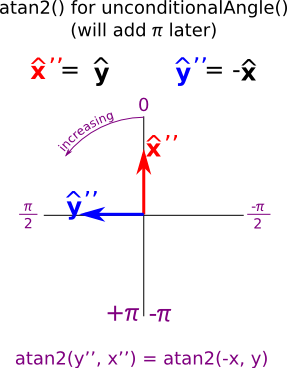 So, what about computing bearing? Once again, we simply have to remap the axes when calling atan2(). Using the same ideas as before, 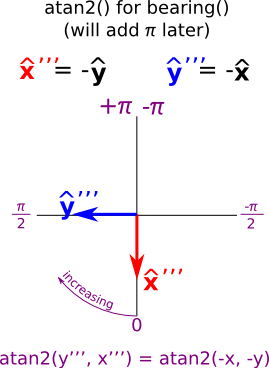 Of course, if you really wanted top performance, you could make this a one-liner by doing away with the intermediate delta object.

Note that I said that Math.atan2() returns values in the range [-Math.PI, +Math.PI], not [-Math.PI, +Math.PI). Therefore, with the unconditional implementations, it is possible to get a result of 360°, for example, with ORIGIN.unconditionalAngle(new Point(-0, -1)) and ORIGIN.bearing(new Point(-0, 1)). All I'll say here is that proper IEEE floating point math has a useful concept of negative zero. I'll leave it to you to decide whether you want to deliberately stamp out this manifestation of that concept.

Here's a jsFiddle of all the code above.

Not the answer you're looking for? Browse other questions tagged javascript computational-geometry mathematics or ask your own question.

2
Comparing numbers and making a calculation
6
Rectangle-segment collision detection
4
Calculating distance and angle between two points, C# program
8
Given a collection of points on a 2D plane, find the pair that is closest to each other
7
4-Bar Mechanism Generation
4
Removing undesired points from a mesh
6
Calculate angle between planes
4
Computing bezier curves of degree n with recursive functions