Me and my team which I'm part of, for most of the time code in Excel VBA. Writing code in it self is pretty enjoyable, but combining our work in a shared repository is pretty painful. The ease our pain of combining/merging binary files, we have decided to help ourselves and create the Source Code Manager module.

Today, I would like from all of you to investigate the former.

Note: if you want to export your code, might have to select Trust access to the VBA project object model in the Developer Macro Settings (File - Options - Trust Center - Trust Center Settings). Otherwise, code will not be exported!

Note2: Everything, which is related to code management, I will try purposefully keep in one module to make it as shareable as possible. Sometime, I will intentionally break a OO principles like creating a new class and moving to it a set of closely related functionalities.

If anything needs an explanation, let me know. This might be a good indication that a piece which I wrote is in a 'not easy to follow' manner, which I'm actively trying to avoid!

The following code presents how do I use SourceControlH module with the Workbook_AfterSave event which lets me to export the entire VbProject when it is saved.

This section will present the actual code which does all the magic.

Modules, with code, which are used by SourceControlH module. These has to be include in your project as well.

What do you thing about this code?

I'm looking forward to hear your thoughts about this piece. Within a week, I will also submit an import functionality for a review.

The overall first impression is a very good one. Procedures are small, focused, generally well-named, everything is pretty much in its place - well done!

What follows is a series of observations, and suggestions / how I'd go about "fixing" them.

So while this is procedural code and we're not going to fuss much about coupling, we can still flag the auto-instantiated object:

While convenient, a global-scope auto-instantiated FSO object isn't something I'd recommend. Kudos for early-binding (side note: consider qualifying the library, e.g. As Scripting.FileSystemObject), but like anything accessing external resources (e.g. database connection, file handle, etc.), IMO its scope and lifetime should be as limited as possible. With a global-scope As New declaration, you give VBA the entire control over that object's actual lifetime.

Alternatively, a With block could hold the object reference in a tight, well-defined local scope, and we wouldn't even need to declare a variable for it:

VBA code that doesn't need to be tied to a particular specific VBA host application's object model library, should avoid such dependencies.

The Source parameter should be a VBProject object, not a Workbook; by taking in an Excel.Workbook dependency, the module becomes needlessly coupled with the Excel object model: if you needed to reuse this code in the future for, say, a Word VBA project, you'd need to make changes.

Why is this Fso qualified with the module name, but not the one in ThisWorkbook? Without Rubberduck to help, a reader would need to navigate to the definition to make sure it's referring to the same object.

But, then again, I'd New up the FSO on the spot, and let VBA claim that pointer as soon as it's no longer needed:

I like your centralized approach to error-raising very much! I find the term "exception" a bit misleading though (if it's an exception, where's my stack trace?), and the procedure names read like properties. I'd propose something like this:

It removes the doubled-up "Exception" wording from the instruction, and the On prefix is reminiscent of the .NET convention to name event-raising methods with that prefix.

The Exception module being a class feels a bit wrong, even more so given the @PredeclaredId Rubberduck annotation, which presumably was synchronized and indicates the class has a VB_PredeclaredId = True attribute value: the class is never instantiated, only its default instance is ever invoked. The .NET equivalent is a static class with static methods, and the idiomatic VBA equivalent is a standard procedural module.

Of course Public Sub procedures in a standard module would be visibly exposed as macros in Excel, and using a class module prevents that... but so does Option Private Module!

Side note, there's a spelling error in this message:

The comma after The VBA project is superfluous, there should be a dot after is protected, and so therefor should be Therefore, capital-T.

That said, VBA project protection can easily be programmatically thwarted, so with a little tweaking I think you could make this macro a bad boy that can just unlock a locked project to export it - but yeah, prompting the user with "oops, it's locked, try again" is probably the more politically-correct way to go about handling project protection.

I'm not finding any uses for the LinesCount function, and it validating whether the stream is open strikes me as weird: raising this error would clearly only ever happen because of a bug, and should be a Debug.Assert check, if present at all.

That H again? I'm starting to think it just stands for Helper, which is a code smell in itself. Once more, this condition would read better as If Not ArrayH.Exists(...) Then, but I'd like to point out that these helper methods feel very much like what would be extension methods in .NET-land, and ArrayExt.Exists - or better, a fully spelled-out ArrayExtensions.Exists would raise fewer eyebrows. Kudos for avoiding the trap of just dumping all "helper" procedures and functions into some Helpers bag-of-whatever module.

This very much Systems Hungarian p prefix is distracting: there's no Hungarian Notation anywhere in the code and it reads like a charm - yes, naming is hard. Yes, naming is even harder in a case-insensitive language like VBA (or VB.NET).

You could make a simple, private data structure to hold the configuration state, and with that you wouldn't need any prefixing scheme:

Note that because Export is a noun in the String variable, but a verb in the Boolean one, a distinction is necessary IMO. Adding a Will prefix to the Boolean name clarifies everything I find. And now you can have properties named exactly after the ConfigState members, without any prefixing scheme - note the Rubberduck annotation opportunity for a @Description annotation, too:

Speaking of Rubberduck opportunities, the @Folder organization can be enhanced - using @Folder annotations on the project's wiki describes how the annotation can be used to create subfolders:

Not sure what Lapis means, but the contents of the Tools module has this "whatever couldn't neatly fit anywhere else" bag-of-whatever feeling to it. What I wonder though, is why there's no clear dedicated SourceControl folder.

I'm not going to claim a more OOP approach would even be warranted here (procedural is perfectly fine), but the basis for sticking to procedural feels wrong: it's not a self-contained module, it has dependencies and must be packaged as a "bunch of modules that need to be imported together" anyway.

Having a Helpers.SourceControl folder would give you the dedicated space to cleanly split responsibilities while keeping the components neatly regrouped (in Rubberduck's Code Explorer toolwindow, that is).

I've seen Microsoft claim using the : instruction separator like this is "good practice" and "helps transition to VB.NET syntax". I'm not buying it at all. It looks awful and crowded. That comment is also very informative: it reads "this GetComponentFullName procedure needs a better name". In the Excel object model, FullName includes not only the file extension, but also the full path: your version of "full" isn't quite as "full" as it should be. In fact, FullName is actually nothing more than a fileName:

Source-controlling VBA code is hard, because the code in a document module (e.g. Worksheet) can very well include references to objects that exist in the host document, like ListObject tables and whatnot - and these can't really be under source control (not without having the whole host document under source control too!). Worksheet layout can't be restored from source code, unless the worksheet layout is itself actually coded: this means a VBA project restored from source control can't really ever fully restore a project without the original host document anyway. So, kudos for tackling this thorny issue.

Note that the last few pre-release builds of Rubberduck include bulk import/export functionality that does everything your code does, out of the box, without requiring programmatic access to the VBIDE Extensibility library, and without needing to share and manage versions for a SourceControlH module across devs and projects: 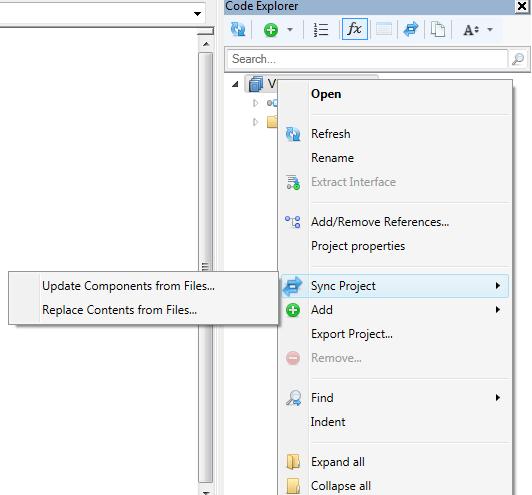 This is my response to the answer given by @Mathieu Guindon.

Scope and life time of Scripting.FileSystemObject

(...) but like anything accessing external resources (e.g. database connection, file handle, etc.), IMO its scope and lifetime should be as limited as possible.

Can you please also explain why is that? What pitfalls I might fall into while using external resources like Scripting.FileSystemObject? One of the reasons might be when I decide to start testing my methods which are using this global scope pointer. Are there any others?

That's correct, LinesCount is not used in this context. I was relaying on Rubberduck to tell me if any method which are not used in this example... turns out it doesn't complain about this method. ProcedureNotUsed inspection should be triggered. I do not have this inspection turned off and filters are not enabled in Code Inspections window.

I think, this is the area where I'm expressing my subjective feelings about particular topics rather that hard data.

That H again? I'm starting to think it just stands for Helper, which is a code smell in itself.

That's correct, H stands from Helper. I'm using this abbreviation to try mitigate a situation where invocation of a method would be predominantly a module name. I think, what I'm aiming at, is to minimize the noise around my helper/extension calls. IMO, it does not take too long to figure out, what H stands for, even when you this piece of code for the first time.

Yes, I'm actively against using Hungarian notation... But, this one is exception. I used this p (private) prefix here because:

The only place where I would use the : is where declaration of a variable AND value assignment is short. Lets say no longer than 65 characters (mine has 67, I know 😊).

Things which I haven't touched on in this answer, I completely agree with.

Not the answer you're looking for? Browse other questions tagged vba or ask your own question.