Not sure what to title this - essentially, inspired by RubberDuck's unit test engine, I've created a way to call private methods of standard modules in VBA. It also lets you pass around modules as though they were objects. So, you can do something like this:

Or in the editor:

If that sounds esoteric (a.k.a. why??) it's because it is, and really this project is more a proof-of-concept of a capability which others may find an application for, as well as a place to consolidate several techniques for dealing with function pointers, memory manipulation and COM/OLE Automation machinery that I've picked up which are quite fiddly to get to grips with. I will still go over some applications at the end.

Summary - How it works

This code does 3 things:

Now for some code, and I can expand on each of those things in turn:

There are 3 main references (other than Scripting.Dictionary):

Edit: I've made all these files, as well as the demo workbook, available for download here. Update: since removing TLI it is now easy to use these; just copy the 3 .xlam files to all be in the correct folder C:/ProgramData/Temp/VBAHack and the demo should just work TM

*Reflection in OLE Automation (that's the whole framework, derived from COM, which VBA is built on under the hood) is most familiar to us when talking about "Late-Bound" code - i.e. when you declare class variables As Object (as opposed to "Early-Bound" As Class1). The way VBA works out what functions different method calls refer to in Late-Bound code is by a special interface called IDispatch (As Object is an alias for As IDispatch). This interface has the job of translating string versions of methods (the names of methods) into actual function pointers - things we can execute. The way IDispatch does that is by looking up those strings in ITypeInfo structures, that map names onto pointers. An ITypeLib is a library containing multiple ITypeInfos; each VBA project/addin defines an ITypeLib and the classes & standard modules are each described by an ITypeInfo.

**VTables or virtual tables are another bit of COM terminology. A class in a COM based language like VBA has some methods. The VTable is nothing more than an array of pointers to those methods in a well defined order - each class/ interface defines its own VTable layout. An instance of a class meanwhile is a chunk of memory for the class variables unique to each instance, where the first bit of that memory stores a pointer to the VTable Array shared between all instances of that class.

The VTables are interesting, I define them in COMTools.xlam like this:

I've been trying to keep my code more modular by referencing external addins where possible. I'm writing a package manager so that distributing these samples will hopefully be easier soon...

1. Getting the secret module objects

This is the first bit of trickery taken from RubberDuck's source code. It's a bit complex and the code speaks for itself, but I'll try to summarise.

Here's all that in code:

Responsible for following the breadcrumbs to get to the IVBEComponent::GetStdModAccessor - along the way generating a project ITypeLib which contains all the public and private members.

... which references a class for doing the iteration over the doubly linked list of VBETypeLibObj:

2. Getting the extended type information

Now we have a StdModAccessor and ITypeInfo for each module in a project, RD has a second trick. The StdModAccessor nominally only lets you call public methods. However calling a method happens in 2 stages:

Therefore, rather than using IDispatch::GetIDsOfNames to generate a DISPID given a method name, we instead get the DISPID from the module's type info which has all the methods. This module is responsible for navigating the ITypeInfo which is challenging as for some stupid reason stdole2.tlb defines but forbids the usage of many of the important types and interfaces becuse they are not "automation compatible", so I have written them again in COMTools.xlam.

NOTE: right now this returns a dictionary of {methodName: DISPID} but could be expanded with named arguments and other useful data for reflection

This is the final bit linking everything together. At this point, RD just uses:

However, I don't like that user interface. What I really want is something like this with dot notation:

But that means creating an object returned by the FancyAccessor function which can have arbitrary methods you can dot.Invoke(). So how can you overload what the dot operator does for FancyAccessor objects?

Again, the implementation of this is quite complex, but the principle is pretty simple. All I do is this:

Here is the slightly complex implementation of that:

As you can see, this interface defines the IDispatch methods we want to overload. They will be used to swap with the default existing IDispatch VTable. Implementing an interface is not strictly necessary, as SwapClass' default instance could define them without implementing this interface. However using an interface means the location of these custom overloads is well defined in the VTable, making the swap easier to execute.

This defines the layout of IDispatchVBVTable based on the above interface. This will allow us to locate the pointers of our custom overloads so we can replace the default IDispatch functions.

Here's where the magic happens. In Class_Initialize() we copy the VTable items at index 7 & 8 of the IDispatchVB interface's VTable to index 5 & 6 respectively, swapping whatever is in the default IDispatch implementation with our custom overloads. The change persists a long time after the class goes out of scope, so Class_Initialize is used to avoid cache invalidation.

Overloading the SwapClass functions like this will leave SwapClass itself as a broken class whose IDispatch implementation does not make sense at all (so we can't let users instantiate SwapClass or cast to that interface). However it will produce a new, better module accessor object that has the power of RD's clever approach with the simplicity of normal late bound VBA code. An advantage of this is that VBA is now responsible for coercing arguments into a DISPARAMS structure, which means things like Property Let/ Set which are usually quite difficult to implement (RD has not got round to it yet), we get free of charge. In fact, the only thing missing right now is named function arguments.

This is the entry point module, that just calls the 3 steps to assemble an accessor for a given module and return it. The interface returned is the overloaded IDispatch of SwapClass (although the consumer will never know that; it is an implementation detail). What they can do is cast to the IModuleInfo interface which will give them access to the raw type info and accessors for maximum flexibility. 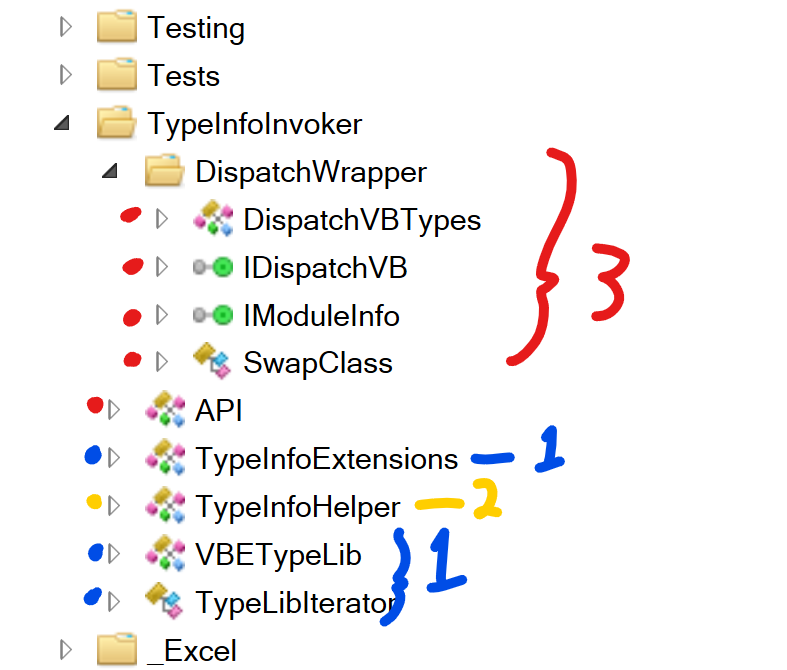 Project file structure with files with numbers corresponding to step 1, 2 and 3 of this post

A couple of ideas:

I tried removing the dependency on TLI (TLBINF32.dll) and it actually wasn't too tricky, just add the following classes as a drop in replacement (for the bits I was using, a tiny subset)

Does the COM calls on ITypeLib interface to help navigate it

... which is wrapped by a class for convenience:

That TypeLibInfo class generates a collection of the ITypeInfos each wrapped in a TypeInfo wrapper for ease of access and all held in a TypeInfoCollection which allows TypeInfos to be filtered by name:

Finally, the methods are called from a module