Counting penalties for each player by joining tables, where some of the data is null

I have a table full of player names:

I also have a table full of player penalties: 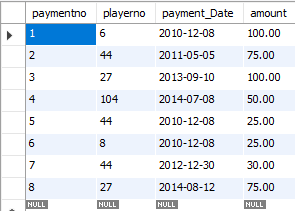 I have to list all of the players names, player numbers, and the number of penalties that they've incurred.

To do that, I'm using this code: 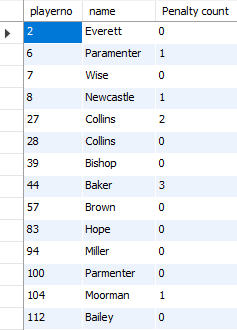 It seems like a lot of code just to merge two tables together. Is there a better way to do it?

I've also read online that keeping the NULL is generally a better practice than changing it to zero, but would that apply in this case, since it's supposed to be the total number of penalties? It seems like NULL would give the impression of "no data" or "unknown data", but in this case the number is known to be zero.

You should stay away from pre-ANSI92 join syntax, as it is more error-prone and more difficult to read. It's better to use explicit join syntax in all cases.

Should be written as:

The primary reasons for this are:

Use meaningful table aliases to shorten column references. For instance, players AS ply and penalties AS pen would make for good aliases. Do avoid using single-letter aliases like p though, for readability.

MySQL uses all lowercase for all table, columns, etc. identifiers, so using UPPER CASE for keywords makes it easier to tell SQL keywords from identifiers. Also, name is a reserved SQL keyword, so when you have a column called name (or any other SQL keyword) it should be quoted with back-ticks like:

There is a much simpler way to aggregate this than how you have done it, with no need for a nested sub-query with an additional join. COUNT(), like other SQL aggregate functions, will take care of handling potentially NULL aggregates to zero, as long as they are included in the query (in this case by using LEFT JOIN instead of INNER JOIN), so we can get the same result much more simply like this:

Not the answer you're looking for? Browse other questions tagged sql mysql database join or ask your own question.