I just started messing around with Java's BufferedImage. I had an idea to try to encode a message into a picture by coloring each pixel a certain color that corresponds to a certain character.

Here's the above paragraph as a picture:

It took about 18 minutes to generate. Note the black parts. Those are spaces.

And here's the Wikipedia article for Steganography: 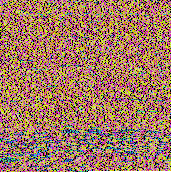 I needed a way of enumerating colors to match colors to characters.

To do this, I decided to treat the RGB color as a 3-digit, base-255 number, then just increment each channel as though I was counting (increment the rightmost channel until it gets to 255, then make it 0 and increment the channel to the left). I used this for a previous project, and although it's slow, it was acceptable.

It works, but it seems like a hack more than anything.

Below is the full code. The last method, color-of-char, is where it's all tied together.

I managed to get a mostly working constant time conversion algorithm written that relies on rem and division. It's O(n) with respect to the number of places in the color, which is much better. Here's this entire question as a picture:

It took about a quarter second to generate. The darker parts are low value characters like punctuation and numbers. They probably correspond to the code.

I'm still interested in any feedback though, since the new solution is still a work in progress.

It is far faster to think of the RGB code as eight-bit fields of one whole number. A function to chop a number into them is

It might be a little faster to use bit shifting and masking, but it hardly seems worth it.

We can then define our own

We can test this, for example, by

As for speed, pre-computing the whole character map

Not the answer you're looking for? Browse other questions tagged performance image clojure steganography or ask your own question.