I'm reading Real World Haskell, and this is my first try with the language.

This is the result of the exercises of chapter 3:

For short, the Graham scan algorithm is:

Now my code is the following:

It works, at least according to the following unit test:

Is it an idiomatic code? How would you improve it?

In your hull function, you use the name origin to indicate the chosen point with the minimum y coordinate. That's confusing, as the term usually means the point (0, 0) in the Cartesian plane. For the rest of this review, I'm going to refer to the chosen point as the pivot instead.

The test result that you quoted in your own question shows that the algorithm is incorrect! 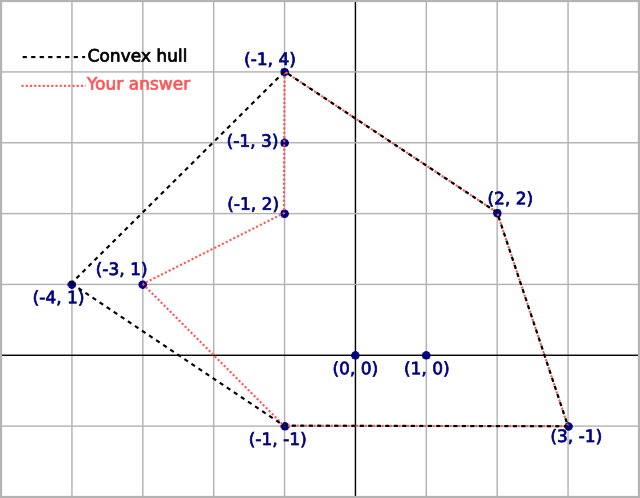 Furthermore, when I ran your code with the suggested test case, I got a totally different result than what you claimed, which makes it hard for me to explain exactly what went wrong. (The code produces results in clockwise order, contrary to your claimed answer which lists them in counterclockwise order. I seriously doubt that you posted the question correctly.) I can, however, point to four issues:

A remedy is to use a vector package to allow you to think at a more abstract level.

In the implementation below, I've rewritten the function further, restricting it to only compare a single vector against \$\mathbf{\hat{x}}\$, and renaming it to cosAngleX to be more honest.

Not the answer you're looking for? Browse other questions tagged beginner haskell computational-geometry or ask your own question.