Is there a better way to do this? Assuming very long lists, is this slow and wasteful?

Despite this being the currently accepted & highest voted answer, these methods from this answer and variations (1, 2) of it:

are all faster than the solution originally proposed in this answer:

This does not perform any unnecessary string concatenation, nor does it require a loop variable to test for the final index.

How does this work?

The print function takes a variable number of arguments, and so would be defined something like:

except it is a built-in function.

The *args parameter consumes all of the unnamed arguments into one list for processing by the function, allowing the function to take a variable number of arguments.

The "splat operator" (*) takes the iterable flavours and expands it into a list of arguments for the function, allowing the caller to pass a variable number of arguments to a function, taken from the contents of a container (list, tuple, etc).

The Python interpreter could match the *flavours splat operator with the *args variable argument list of the print function, and simply pass the flavours list into the args.

But does it? I got worried. Perhaps, because a list is given, and the variable argument list (in CPython) is passed as a tuple, the list actually must be copied. How much time does it take.

After creating a class Null output stream, to speed up the printing, I began passing variable sized lists to the various answers, and profiling the results. While my solution is one of the least amounts of code, it turns out that @Peilonrayz's solution of ", ".join(flavours) seems to be the fastest. 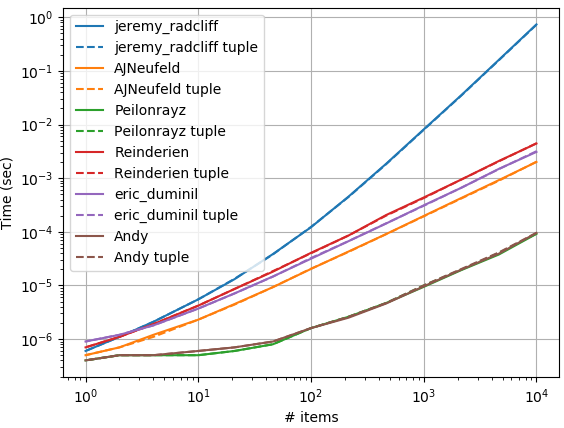 Using tuples or lists doesn't seem to affect the performance much, so any thought that splatting a tuple instead of a list, to be collected into a *args variable argument tuple may be optimized to a no-op, seems to have been squashed.

Since print will automatically convert objects to strings for printing, the above will work for all object types in a list. The ", ".join(flavours) will only work for strings; it would have to be modified to convert non-strings to strings to be truly equivalent:

The best solution is to use str.join(), using ', ' as the joining string.

Comparing this to the two adaptions of my approach, and against AJNeufeld in one of the graphs:

There is indeed a better way.

The most expensive part of your solution is the call to index. That needs to be avoided because it does a search for the current item on each iteration.

Using f-strings, which are pretty fast:

The built-in print function (in Python 3+) has a sep (separator) argument. Performance is not as good as with str.join, but I just thought I'd mention it. In combination with * argument unpacking:

Not the answer you're looking for? Browse other questions tagged python performance formatting or ask your own question.

2
Perform a predetermined set of operations on a large sequence

1
type/class __repr__ formatter for Python objects
2
Parsing users from a list of commands for email notifications
1
Ice Cream Parlor
6
Split list of integers at certain value efficiently
2
Generation of products of power
1
Optimize printing massive strings to System.out with respect to time
2
find in which sublist of a list are any value of a list in python
3
ways to code for better speed of processing date comparisions / slicing in python
9
Comma formatted list printer
3
Python function to output a string that is justified to the right