I've always wanted an easy and intuitive way to inject variables into a string. So after about 10 variations, I finally came up with this function.

The concept is that I can find every pattern such as {key} or {0} or whatever {taco} and get a unique list of these. If there are more keys than there are variables it will raise a custom error. (Keys are case sensitive.)

If it matches then it uses the index of each ParamArray variable and matches that to the index of the pattern list. For example "{bacon} {burrito}" bacon: 0, burrito: 1.

With that match, it simply replaces every instance of the match with the value of the variable.

I originally had the pattern start with a dollar sign ${0} to copy JavaScripts syntax but decided to keep it shorter for simplicity.

It does use the escape character \. Example: \{test} would be print {test}.

It also includes shortcuts for vbNewLine \n and vbTab \t.

I thought about doing this late binding but figured performance is probably better with these libraries referenced and they are common enough that it should not matter.

The tests for it

My first test is using RegExr.com to see if my pattern would match. Just to note, I use the first capture group as the actual replacement so the characters before will not be replaced. 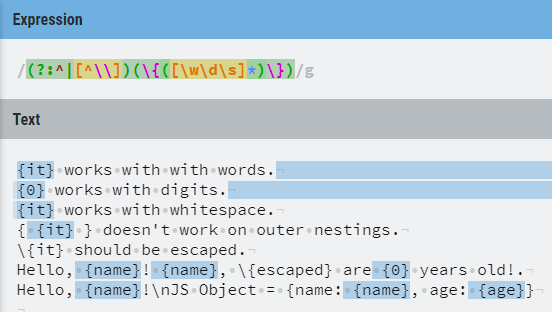 The next step was to try it in VBA. I just copied the same lines and printed them to the immediate window.

Here are the results. They printed how I expected them to.

What I would hope for in answers

I'm not a reviewer, will be commenting on your regular expression though.

Based on these comments, maybe your expression could be modified to:

If you wish to simplify/update/explore the expression, it's been explained on the top right panel of regex101.com. You can watch the matching steps or modify them in this debugger link, if you'd be interested. The debugger demonstrates that how a RegEx engine might step by step consume some sample input strings and would perform the matching process. 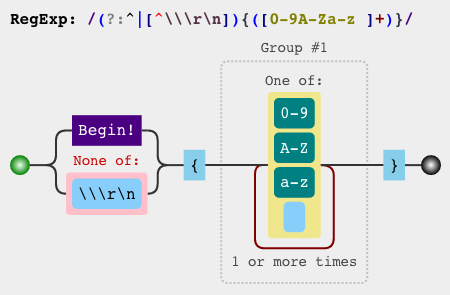 has a better performance as compared to the first one

in terms of time complexity. You can look into the number of steps in the demo. Finding ways to bypass alternation (|) is usually a good thing, it would help in runtime.

Not the answer you're looking for? Browse other questions tagged vba regex or ask your own question.