Given a string, find the first non-repeating character in it and return it's index. If it doesn't exist, return -1.

Note: You may assume the string contain only lowercase letters.

Taking advantage of the input being fully lowercase ASCII I created two bit vectors to track when we encounter a character for the first and second time.

Can this code be improved further? LeetCode says that below code is better than 94.33% solutions. What else could have been done by the last 5.67% solutions that they were better? 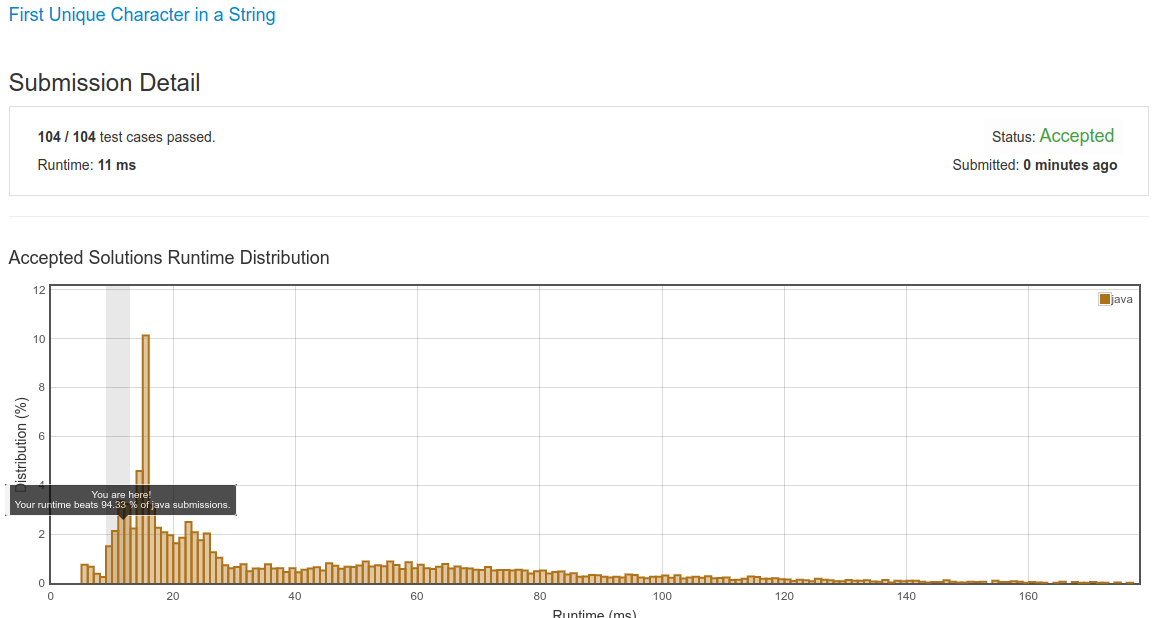 Are there tricks that can be done to improve the LeetCode score? It seems that enhanced for-each loop performs better than standard for loop but I can't prove it. It's an observation based on few of my previous submissions.

You don’t need to check if the second spot has been filled in; just unconditionally set it.

After the first loop finishes, if firstSpot == secondSpot, you can immediately return -1

Taking advantage of the input being fully lowercase ASCII

While it says that all characters are lowercase it doesn't say anything about ASCII. Given that it passed the tests that was okay, but generally lowercase doesn't imply ASCII.

I created two bit vectors to track when we encounter a character for the first and second time.

And that really requires the input to be ASCII. Because char can hold any value between 0 and 65535 the << might not be safe to use, I'm not a Java programmer but it could result in an exception, an unwanted result or undefined behavior.

But if it's just ASCII characters between 'a' and 'a' + 31 the approach will work.

Can this code be improved further? LeetCode says that below code is better than 94.33% solutions. What else could have been done by the last 5.67% solutions that they were better?

It seems like your definition of "improvement" is "better performance". But that again is probably not how every programmer defines "improvement".

So my personal opinion is: There's lots of room for improvement.

I also have some thoughts about the algorithm and how it could be improved. As said I'm not a Java programmer so I'm just sharing some thoughts:

Here is my shot (admittedly in c#).

Not the answer you're looking for? Browse other questions tagged java algorithm or ask your own question.