A naive solution is to take, as the list of candidates, all substrings of the long text. However, the number of candidates will be huge. So, now I use make several heuristic assumptions:

These assumptions allow me to reduce the number of candidates dramatically, so all of them can be checked in a reasonable time. Here is the current solution:

This heuristic solution is quick and quite accurate in practice, but of course it is not guaranteed to work. I would like to get rid of the assumptions, especically assumption #1. Is there a quick solution that does not need to assume anything about the first and last characters of the needle?

Note: before writing this function I tried to use the fuzzysearch library. However, this function requires an upper bound on the Levenshtein distance between the short text and its variant inside long text. Even with modest upper bounds (e.g, 60-70) it becomes quite slow.

Since there is no answer yet - what I would try:

I would search words rather than characters. make a dictionary of words (bag of words) and count the frequency. your test bag of words should be a subset of the source bag of words mostly. by comparing to other sources you could analyze relevance of words and other measures.

The big advantage of words vs. characters is that the comparison resyncs with every whitespace. an insertion/deletion of a character will result in a single changed word. you are now talking in edit distance of words, rather than characters. so translate your strings to arrays of words (whatever representation you use for a word (sequential number, hash, reference, ...).

Now slide your test words over the source words and count the number of word matches. for your parameters this will be around 1,000 word over 1,000,000 words, which sounds reasonable. you get an array of match counts with length 1,000,999. it will have the following properties

this would be less heuristic than your approach, although you probably will again apply some more algorithms/heuristics to find the 'exact' match start/end.

EDIT: I simply had to try the bag of words approach

I simply slide a window of the probe words length ofer the text words in single word steps. for this text window i calculate the bag of words and compare it to the probe and sum the absolute difference values for every entry.

This measure for my test set 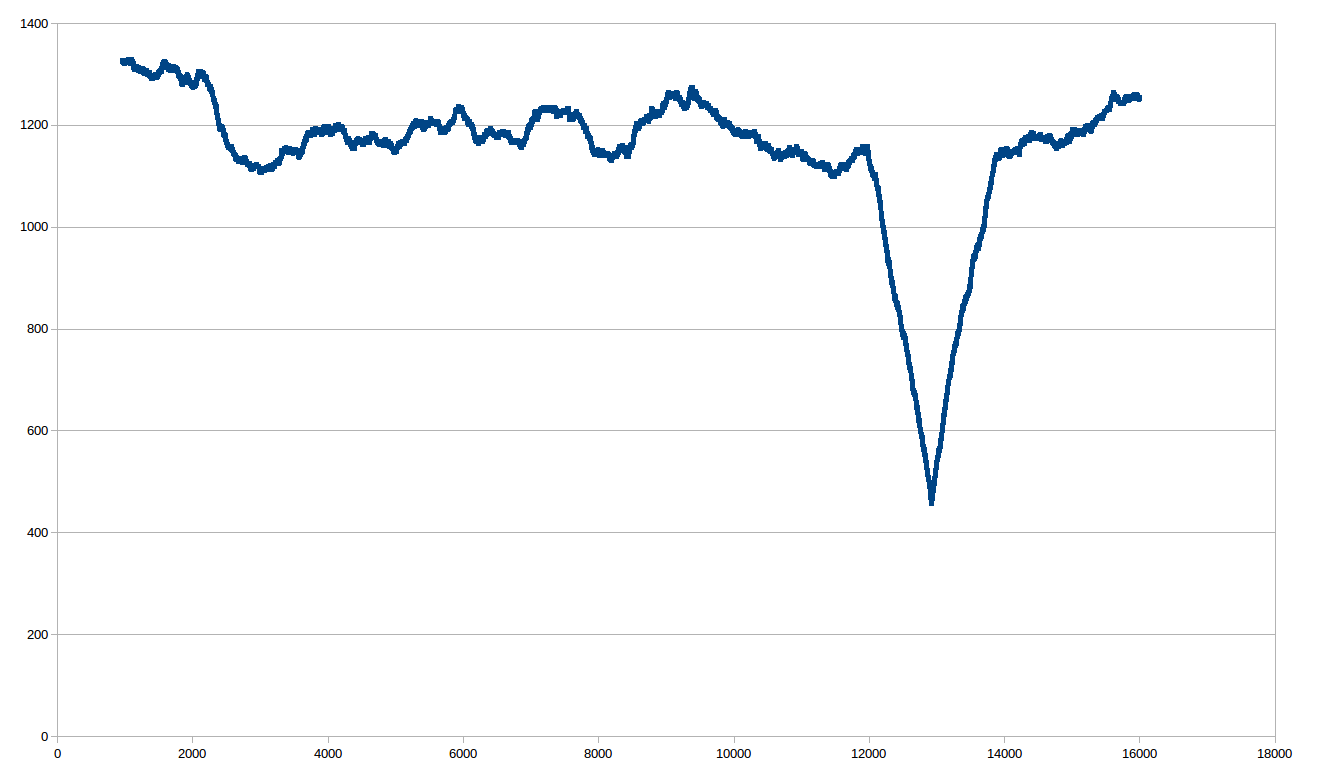 This looks pretty robust to me. We see

See the transition scaled up

Not the answer you're looking for? Browse other questions tagged python algorithm strings search edit-distance or ask your own question.