This Greasemonkey script adds links to tags on StackExchange sites which allow for activating, deactivating and ignoring favorite and related tags by using UI components.

Since JavaScript is not my favourite language I'd be glad to hear what can be done more elegant, more beautiful, more performant, etc. (also by using jQuery, for instance). 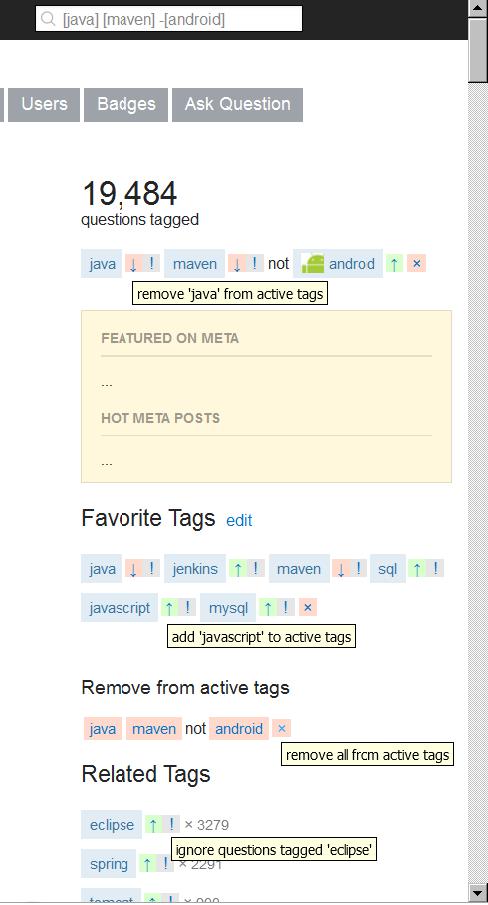 Since Stack Exchange already uses jQuery, I think it's a good idea to write userscripts using jQuery too. However, rewriting the whole code to use jQuery instead of native APIs would require a lot of work, so I will just comment on the code you wrote.

I would put the 'use strict' statement in the next line.

You're using many semicolons. JavaScript has a nice feature called automation semicolon insertion, which means you almost don't need to use semicolons at all, with just a few exceptions. From npm style guide:

Don't use them [semicolons] except in four situations:

Note that it's only a matter of style. You don't have to follow it if you don't like it, but personally I think that if something is not required, there's no reason to use it.

You don't use quotes or apostrophes for string literals consistently. For example:

Decide if you want to write string using either apostrophes or double quotes and use it consistently in the whole code. Personally, I prefer apostrophes, because they require to press only one key, whereas to insert a double quote character you have to hold Shift too.

And for example if you choose apostrophes and you want to make a string which contains apostrophes, feel free to use double quotes in this specific situation, so you don't have to escape the apostrophes with a backslash.

You're using document.evaluate() to select DOM elements. I don't really see any reason why it could be better than document.querySelector(), which uses CSS-style selectors. And unfortunately, it's not supported by IE at all. I think you should support at least IE 11, because still many people use it.

ECMAScript 6 has a lot of great features, and most of them are already supported in major browsers, but you aren't using any of them. For example, in for loop, you could use let instead of var, to limit the scope of the variable to the loop. This loop:

could be changed to:

I see you're using strict comparison operators (=== and !==) almost everywhere, but in one place I think you forgot one equal sign:

Try to use some more meaningful identifiers, for example ignoreTagLink.

Instead of using inline styles, I recommend you adding a class to the element, and define CSS rules for that class, like that:

You're repeating some code — don't do this, it's a bad practice. Try to follow DRY (don't repeat yourself) principle.

Some lines of code are too lengthy, like this one:

You could split it into multiple lines like that:

That's all issues I see for now, if I find some more, I'll edit this answer.

Your indentation is incorrect in a few places.

You're starting a block, so you need to indent all its children correctly. That includes 'use strict'

Here your close brace is on the new line, but it doesn't belong there. Also you misspelled quote. Your title could use a refactor anyway.

I'm seeing a lot of whitespace where it doesn't belong:

Your naming is a bit confusing:

Add links to what?

Quoting regex special characters in what?

This is very confusing. While I'm sure each of the letters have relevance to what the variables contain, you're effectively trading like 7 letters for readability:

I nearly forgot entirely about XPath, thanks for bringing back the nightmares.

In all seriousness though, CSS selectors have been a core feature of JavaScript for a very long time. You should use them instead.

Instead of your eight parameter document.evaluate, you can just pass through a simple CSS selector ('div#interestingTags a')

and for the ones where you find elements by Id:

If you're hosting this script on GitHub or somewhere public, you can include @downloadURL and @updateURL headers so Tamper/Greasemonkey will automatically update your userscript when you push out a new version.

When you find yourself writing a regex like this:

You should question what it is you're trying to do. You shouldn't be coding to the "cleverest" way, because when you come back to try to maintain it in two weeks, or in production code for others, it's gonna be really hard to maintain.

You don't want a call from the new guy two weeks after you're finished while you're sipping mojitos in Barbados. Try debugging Regex over the phone. Not fun.

Anyway, you probably should avoid using regexes for everything (they're all throughout your code), they overcomplicate your code, and make it really really hard to read.