In my app, the user can upvote a cycling track if they want to ride on it.

Note: I do understand I can use a boolean column to check if a user has voted or not, but, I am just testing at the moment.

My logic works the following way:

First, it needs to determine what user is accessing the program, which is done by sending a query to find their lastName and gather their objectId and hasVoted score.

The program works out which course the user is currently looking at and assigns it to the currentCourse variable (just for testing). Then, it queries the Votes database, and tells the user if they have voted.

If hasVoted is equal to 1, then the user has voted, otherwise it'd equal 0, meaning they haven't.

After hasVoted comes back with 0 the program queries the database class Votes again, but, this time increments the Votes (row that shows total votes) and hasVoted.

Is there a better or cleaner way to express this logic?

Lately, when writing Code Review posts, I like to point out the first thing I notice when I look at someone code. 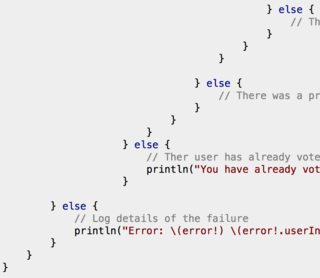 This is the first thing I notice when I look at your code.

Without looking at anything else, I can already tell you that your code is way too deeply nested and therefore absolutely confusing.

With looking at your code, I can tell you that not counting any of the if/else block nesting, you've quadruple nested "background" blocks.

Your code boils down to this:

This is impossible to follow once you have the actual code in.

We need to break these things down into individual methods.

So, start from the inside and work your way out.

Now step out a level, what are we doing? Fetching a user (so we can update the user's vote count), right?

Continue this logic all the way out. Each time you're passing a closure, break that out into a separate method.

I'd also uncouple the logic slightly I think. It's hard for me to follow what you're doing exactly... and I'm not familiar with what Parse allows, but in the end, you're making five separate network request just to make a single vote. I don't know what you can do with Parse, but it really seems to me that this should be one simple network request.

And it should only make a single network request, passing the user ID and the course ID or whatever is needed to figure out which user and which course.

Then the server side takes care of the rest (makes all these checks). If the user can't vote for whatever reason, the server should return false for success and report an error (something like "User has already voted.").

... but I don't know what's available with Parse.com. If you were writing your own API endpoint, this is definitely what you'd want to set up.

Not the answer you're looking for? Browse other questions tagged ios swift or ask your own question.

25
Rewrite code from Objective-C to conform with Swift power tools and concise style
5
Optimize Data Sending/Querying to Parse Swift iOS
3
Image Scrolling in UITableView with Parse
7
Adapting layout for various iPhone and iPad screens using constraints and multipliers
4
Show and hide views
1
Export class instances to a string (for sharing, backup) and importing them
0
How to load and get data from 2 files