OR vs UNION in message tables

I have a dilemma. I have a messages table containing fields id, sender, receiver, body I need to select all users a given user has had a conversation with. A conversation may be a single message without a response.

Here's a show create table for you to see the indexes (as I may have set them up incorrectly):

However, I know that MySQL cannot take full advantage of indexes with OR comparisons (may be wrong), so I came up with an alternative of two queries which can both benefit from the indexes:

Which one of these approaches is better in terms of performance and complexity?

You should make it a habit to look at your queries' execution plan when in doubt. I recreated the table in SQL Fiddle (albeit, without containing data) and it shows that the query with OR is less complex.

Please note: SQL Fiddle does not support your FOREIGN KEY constraints, so I had to remove them.

First query with OR: 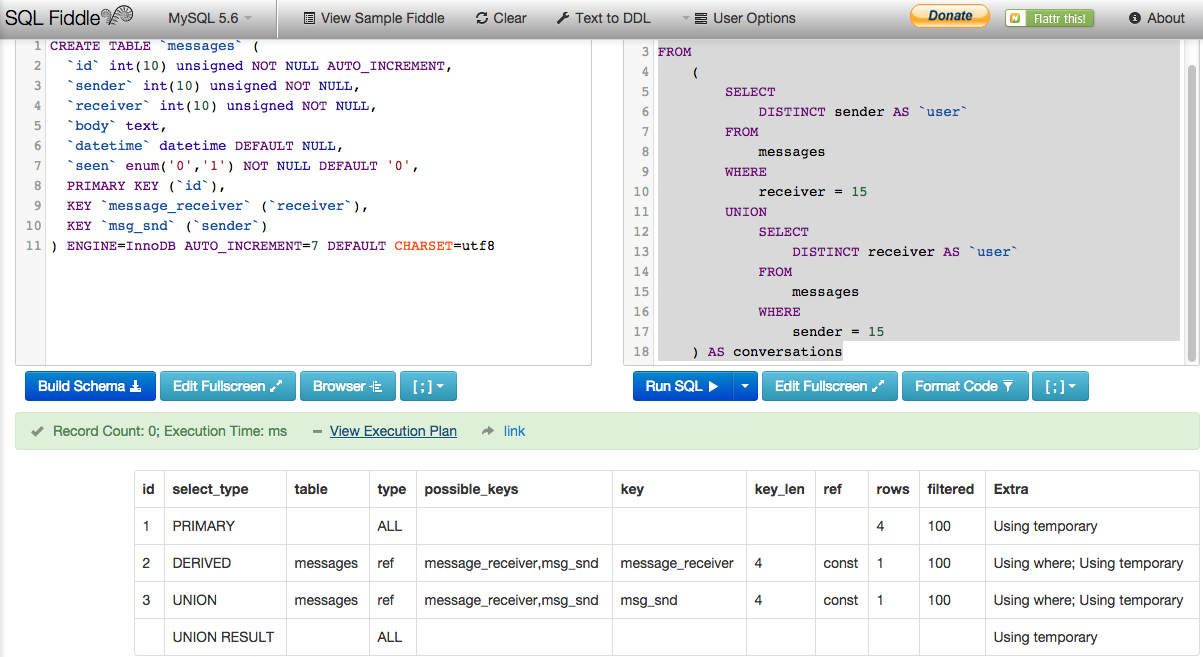 As you can see, the complexity of the 2nd query is higher, which might make it slower (or faster!), albeit the direction (faster or slower) and how much difference it will have depends on a lot of other things too.

In MySQL (and many other DBMS), it's actually (and counter-intuitively) the UNION ALL is usually more efficient than the OR version. Of course, that's because the UNION ALL does not have to remove duplicate rows. In many cases, including this one, we have use UNION (so UNION DISTINCT).

The edit below has been suggested by @ypercube, from dba.SE, and voluntarily added by OP:

Also note that your second query has a unnecessary level and an extra DISTINCT that is redundant which will almost certainly drag efficiency down. Here are two simplifications:

Not the answer you're looking for? Browse other questions tagged sql mysql comparative-review or ask your own question.

1
How should I format my code to make it easier to read and understand in the future
1
Are these tables concepted correctly?
3
Tables for doctor and patients
5
Long SQL query with much duplication between two halves of a UNION
1
Two tables for storing comments
1
Fetch data from multiple tables
1
Get all members from country depending on multiple tables
1
MySQL queries to select messages related to a user, using UNION vs. OR