This assignment is taken from Berkeley's CS61A page here. 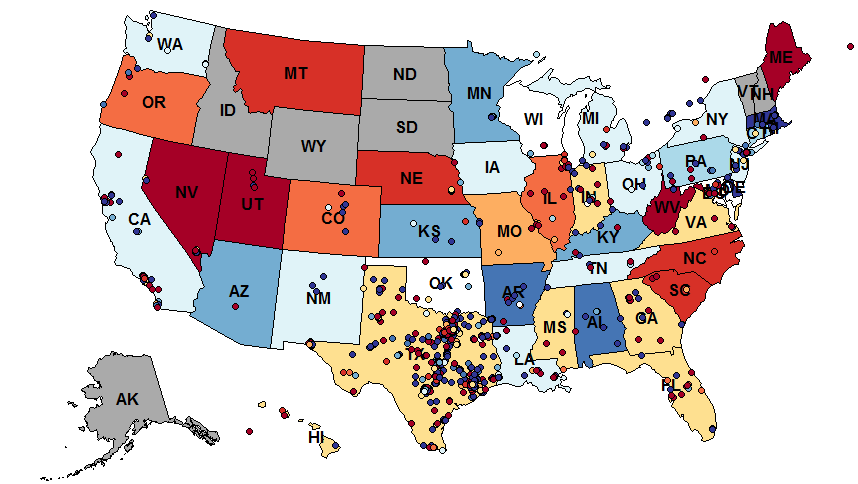 In this project, you will develop a geographic visualization of twitter data across the USA. You will need to use dictionaries, lists, and data abstraction techniques to create a modular program.

The map displayed above depicts how the people in different states feel about Texas. python trends.py -m texas. This image is generated by:

Phase 3: The Mood of the Nation

The name us_states is bound to a dictionary containing the shape of each U.S. state, keyed by its two-letter postal code. You can use the keys of this dictionary to iterate over all the U.S. states.

In this phase, you will write functions to determine the state that a tweet is coming from, group tweets by state, and calculate the average positive or negative feeling in all the tweets associated with a state.

Problem 8 (1 pt). Implement find_closest_state, which returns the two-letter postal code of the state that is closest to the location of a tweet. Use the geo_distance function (provided in geo.py) to calculate the shortest distance in miles between two positions.

When you complete this problem, the doctests for find_closest_state should pass.

Problem 9 (1 pt). Implement group_tweets_by_state, which takes a list of tweets and returns a dictionary. The keys of the returned dictionary are state names (two-letter postal codes), and the values are lists of tweets that appear closer to that state's center than any other.

When you complete this problem, the doctests for group_tweets_by_state should pass.

Problem 10 (1 pt). As an exercise, implement most_talkative_state, which returns the state containing the most tweets containing a given term.

When you complete this problem, the doctests for most_talkative_state should pass.

Problem 11 (2 pt). Implement average_sentiments. This function takes the dictionary returned by group_tweets_by_state and also returns a dictionary. The keys of the returned dictionary are the state names (two-letter postal codes), and the values are average sentiment values for all the tweets in that state.

You should now be able to draw maps that are colored by sentiment corresponding to tweets that contain a given term.

If you downloaded the small version of the project, you will only be able to map these four terms. If you would like to map any term, you will need to download this Twitter data file and place it in the data directory of your project.

As per the testing instructions given in the phase 3 problem, this solution is tested accordingly.

Just like in other quite similar question, I find the already existing code slightly weird but I'll comment only on the code you have written.

which can be written in a more concise way and the code looks like :

Alternatively, this can (and probably should) be written using the min builtin.

Many comments above apply to most_talkative_state which could easily be rewritten using max.

Not the answer you're looking for? Browse other questions tagged python python-3.x twitter or ask your own question.