This is my very simple client-server application. Client sends some commands to the server and server gives back the output to the client. However, my special concern is about the GET command sent to the server. The client request GET filename to download a named file. That file ultimately gets downloaded into the client directory with the HTTP response headers, as I have designed my protocol.

Now I am afraid if my coding follows the protocol accurately, especially the HTTP response headers with the Line break (in both client and server side). 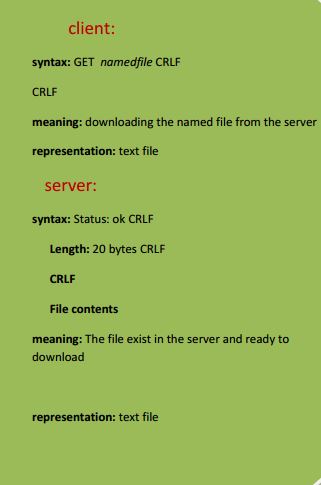 Ohhh... a juicy question. Your specific concerns are about the GET calls, but let me address some other things first....

You have put your entire server-socket loop inside the constructor of the server. Server socket loops are never pretty, and I can understand your uncertainty of how to handle things, but I would suggest one of two things:

I encourage you to explore the Thread version because it will expose you to other aspects of server programming, specifically multi-threading which would be the logical next step for you if you want to handle more than one client at a time.

You have some small bugs that concern me... for example:

That code gets the file-size in bytes, but then reports it in KB.

Also, for that code, I would recommend a printf....

Here's an interesting one....:

That code creates a buffer of size 4.... which is not what you want.

When printing exceptions, always print the trace too. You have code like;

Both of those should at least print the entire stacK:

Also, the System.exit(0) implies the exit is successful, use a non-zero output for an error condition (System.exit(1));

You have a number of 'fields' which are declared at the class level, but only used briefly inside specific methods. For example, fis is opened, and closed. There is no need for it to be a class field. The following would be better:

You should become friends with this, it is nice. Your code closes and flushes the streams, which is good, but it would be better to let the system do it automatically.... Your code:

would be better as:

is not necessary, and strictly speaking incurs an extra maintenance burden: each time you decide to add another request you'd have to modify this test. Consider a straightforward

BTW, a cascade of else ifs suggests a map of request to handlers.

Not the answer you're looking for? Browse other questions tagged java http server client or ask your own question.