Another Conway's Game of Life Simulation (With colored populations!)

This is my near-final version of Conway's Game of Life, with inherited colors using PDCurses. Any new spawned cells take on the most frequent color surrounding it when it spawns. This leads to single-colored populations roaming around, and causes interesting "battles" between 2 populations; which usually end in one taking over the other.

I already had one review of it, which increased its speed considerably, but now I'm looking for more general feedback about best practices, and feedback regarding the following: 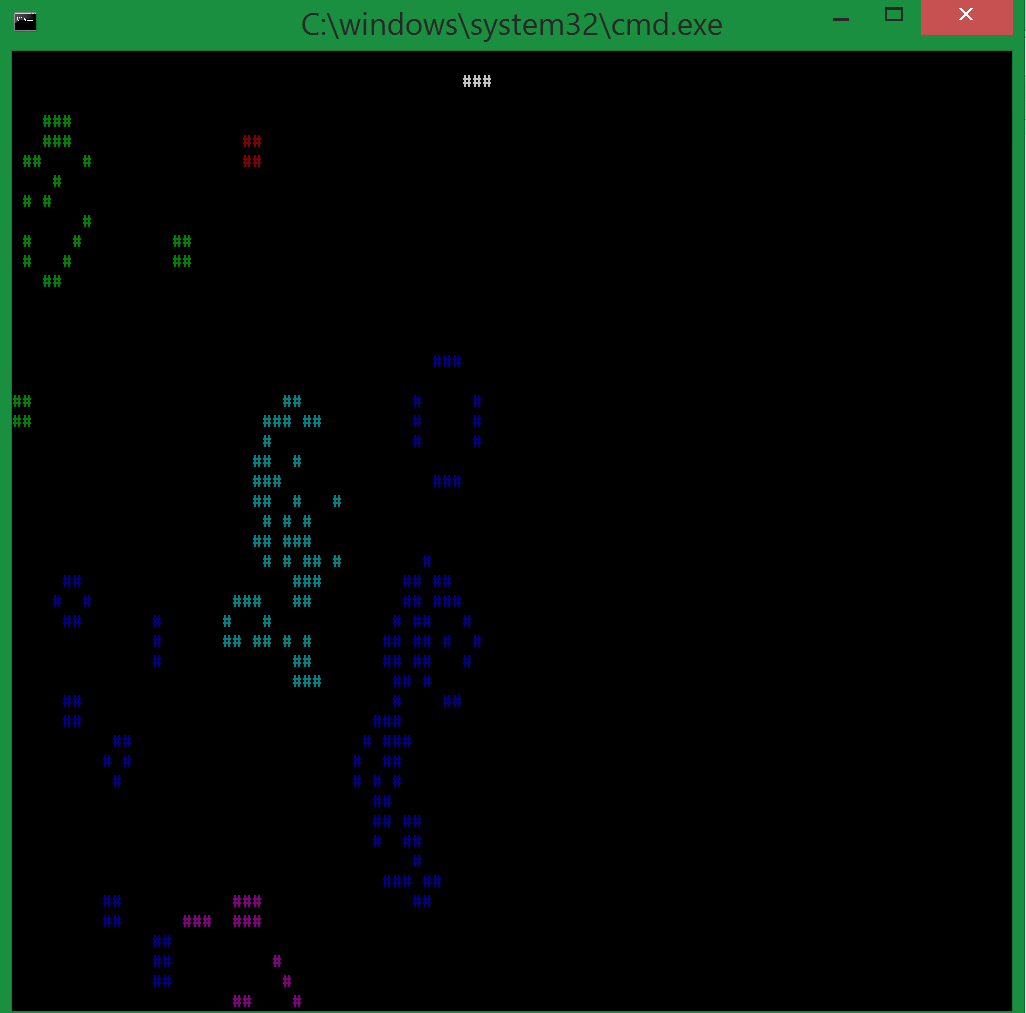 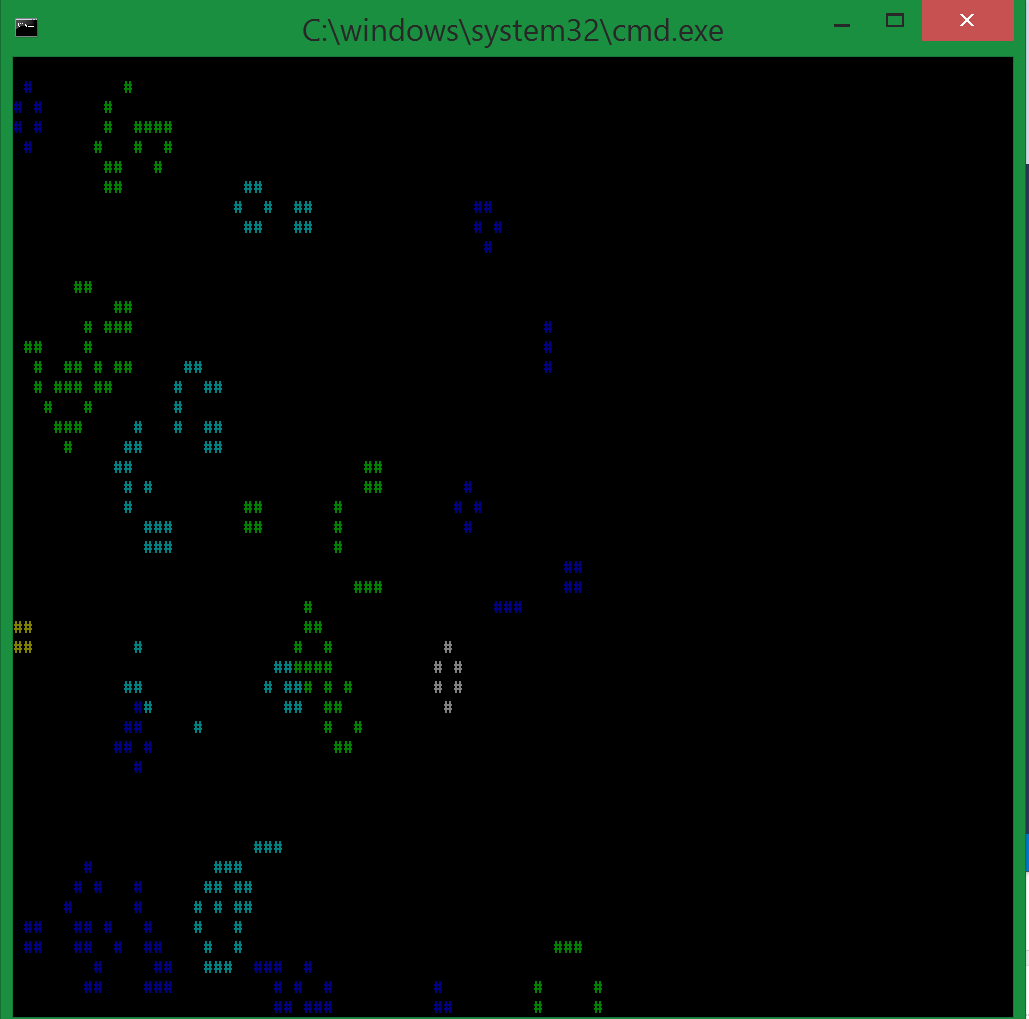 Timer.h (Not entirely necessary for the program to run, but it's used in the main):

I see a number of things that could probably help you improve your program.

In main(), argc and argv are unused. I'd recommend either eliminating them by changing the function to int main() or better yet, use them to pass in the required initialization variables for dimensions and seed value.

Use standard function where available

The code uses a custom strToInt function, but it would be better to simply use std::stoi.

The values for maxX, maxY are set once and never changed which suggests that they should be const instead. I'd recommend eliminating inSeed, tempSeed, inX and inY and all of the associated clutter and instead using this:

Have your constructor fully construct the object

The code currently has the equivalent to these lines:

Instead, why not simply make a constructor that does the randomization?

Now the World object is fully instantiated and ready to use which should be the result of every constructor. One way to do that:

At the moment, the constructor for the World object has this declaration inside the World.h header:

Unfortunately, this is not sufficient for someone trying to use the World object. A very simple addition would be to simply name the parameters:

This doesn't take the place of good documentation, but it's very useful for quick reference and costs you nearly nothing.

Never use an external parameter as a printf format string

The World::compileOutput() routine includes this line:

However disp is a std::string passed from outside the object. This is potentially dangerous because it could potentially be used for a format string attack. A better alternative would be this:

Now if you make the passed parameter a char, there is no longer any way to abuse it. Further, you avoid the overhead of having to create and destroy a string object every interation, which helps performance.

In the World::compileOutput() routine, there there are calls to attron and attroff surrounding every output. However, these are not necessary. Instead, the could could look like this:

By ORing the color value into the character value, you can avoid the two calls.

Use only required #includes

Your .h files are the interface for the class. For that reason, in those files, you should only include the #include files that are required for the interface. So in the case of World.h the file currently has the following includes:

Consider this code in your World::randomizeCells() routine:

What the code is attempting to do is to generate a boolean value distribution that is true with a probability of chanceOfLife. So if chanceOfLife has the value of 0.25 we would expect about 1 in 4 values to be true. That's called a Bernoulli distribution and C++11 has a much more direct and much more elegant way to achieve this.

You will need to #include <random> to use this facility.

The World and Population objects are closely intertwined. It appears that the World is essentially responsible for displaying the data and that Population is responsible for creating and updating the data. That's a fine and appropriate way to separate things, but there are redundancies. For example, the Population class definitely needs to know the height and width so it should have those member data items, but then they should be stored only there and the World class should get them from there rather than storing duplicates. I rewrote your program and removed the Timer and associated stuff. The Main.cpp now looks like this:

As you can see, the generation counter is delegatated to the World class. The constructor and destructor for the World class take care of all of the curses setup and teardown. I have also overloaded operator++ to advance to the next generation and changed the name from compileOutput which seemed rather vague to display which actually does what it says.

Here is a rewritten constructor for World:

Note that all of the work is done inside the constructors for the objects. Also note that member data will be initalized in declaration order and not necessarily in the order listed in the constructor, so best practice is to make sure they match. In this case, it makes sense to list worldWidth and worldHeight before pop so they should also be declared in that order.

Use standard algorithms instead of indexing

We can greatly simplify code by using range for instead of indexing. For example, moving the randomizeCells to the Population class, it might be written like this:

Even simpler, we could use a standard algorithm std::generate from <algorithm>:

This code uses a lambda to initialize each cell.

The getNeighborData routine is more complex than it needs to be. An alternative approach would be to store relative offsets for each of the 8 neighbors in an array that is initialized by the constructor. If x is the width of the visible array, the offsets are these:

For cells that are not near the edge, counting is now very simple. For ones that are at the edge, the current code makes sure to count only neighbors that are inside the actual rectangle. To keep the counting simple, but to maintain that same counting style, one simple way to accomodate that is to simply allocate a "dead band" of permanently dead cells around the periphery. This wastes a little space in the data structures (4+(2*width*height) cells) but greatly simplifies the calculation of neighbors. Since neighbor calculations are probably where your program spends much of its time, it's probably worthwhile to make that space/speed tradeoff if you wish to maximize speed.

To expand on that a bit, here is the routine I wrote to test the speed difference:

A few comments about this code are in order. First, it is designed to be iterated through only the non-edge cells in the array. Second, it takes advantage of a neighbors array (not shown) which has the offsets mentioned above. Third, we only care about the color if there are exactly three neighbors, so what the code does is store non-zero colors in the array n[]. These values are not used except in the circumstance that there are exactly three neighbors. In that case, the only values are necessarily in n[0], n[1] and n[2]. If they are all three the same color, then we choose n[1] as the new color. If only two are the same color, and they are n[0] and n[1] or n[1] and n[2] we choose n[1] as the new color. Otherwise, either n[0] and n[2] are the same or they are all three different; in either case we choose n[0]. This eliminates a number of routines, the Neighbor structure and a lot of time. My tests showed a 3x improvement in speed.

If the members are non POD this will make a difference. So it is just a good habit to do it for all values (as types may change over time).

This interface looks a bit leaky

It basic looks like you use Population as a container then other classes just pull all the data from it and then manipulate it directly via the API. This leaks your implementation extraction.

I would reverse the design. The Population class knows how life is run. Then it updates the GUI via an interface that you provide.

Use constructors when useful

Even easier if you use standard conversions:

Or event the standard functions:

Timer is defined but is not really used. You can remove all references and the code will work just as well.

To answer your first question, I would get rid of NeighborData completely. Change:

For your second question, you could find the common color a tiny bit faster if you kept track of the most common color as you encountered each neighbor. Like this:

Since you have at most eight neighbors, you only do work 8 times max. With the consume function, you loop 16 times even if there were no neighbors.

I'd want to add to some exellent points outlined by other reviewers.

Not the answer you're looking for? Browse other questions tagged c++ game-of-life curses or ask your own question.