A S.I.N checker, using Luhn's Algorithm, and created in swing.

I have created a program to validate a Canadian S.I.N. using Luhn's Algorithm, and was wondering if there was any way to make it more efficient. From what i can tell, it is already extremely efficient, but any tips or advice will be greatly appreciated.

For portability, you should use a layout manager, not absolutely positioned elements. Here's what it looks like on OS X: 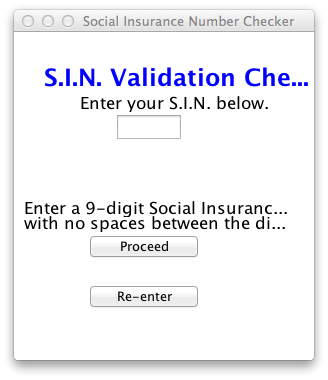 I don't see a reason for two sets of instructions; the instructional text should be placed together.

"Validation Checker" is redundant. It's either a "SIN validator" or "SIN checker".

"Valid SIN" could be construed as meaning a number that has been actually been issued by Service Canada to a person. Perhaps you should clarify that it's merely a "possibly valid SIN".

Why prohibit spaces? Canadian Social Insurance Numbers are conventionally rendered as three groups of three digits, with spaces or hyphens between groups. Your program could easily be made more lenient and human-friendly, accepting and ignoring the superfluous punctuation.

To facilitate data entry, you should allow number keypad-only usage and perform the validation when Enter is pressed. (Currently, you have to press Tab and Space, or click Proceed.) For that matter, you could automatically perform the validation as soon as nine digits have been entered, without even requiring Enter.

Automatically returning focus to the number field and selecting its contents after validating was a nice touch.

"123456789012345" or "hello" cause a NumberFormatException which is invisible in the UI. It just looks like either a valid SIN or an invalid SIN, depending on whether the previous validation passed or failed.

You should implement the Luhn algorithm check in its own function (if not its own class) rather than in the event handler. That lets you reuse the code in other contexts such as a text-based UI, a tax-preparation program, or a unit test.

These lines of code are not as clear as they could be:

Rather, I would prefer to see the button and text field identified with descriptive variable names. The ActionListener should be simplified and could be made into an anonymous inner class:

Speaking of reusability, consider making your SinChecker a JPanel instead of a JFrame, so that you have the flexibility to use it as a widget that is not its own window. In that case, your widget should offer a getSin() method that returns a guaranteed valid SIN.

In accordance with the documentation, Swing code must run in the Event Dispatch Thread, not the main thread.

@200_success already covered the important points, so I'll focus on readability and style of your code.

Most of your comments are not all that helpful because they just describe the code. Eg implement first action listener is not needed, ButtonListener implements ActionListener already tells me that. The same goes for Set the title of the window, naming variables, etc.

Your comments should explain why you do something, not what you do. If you feel that you need these comments to separate blocks of code (eg without it, the SinChecker constructor would be one big block of unreadable code), extract some code to a function with a proper name. You can then also add a JavaDoc method comment which can describe in detail what the method does.

Your formatting doesn't follow general Java conventions. It's always good to follow conventions, so that people used to Java have an easier time reading your code.

The first three points can easily be fixed with any IDE such as NetBeans or Eclipse.

This is for Java Bean Validation but here are my key concepts:

The problem with the approach above is the regex checks which means I am iterating the string more than once. I eliminated it with this new one in addition, I added the check for first digit is 8 which is not allowed according https://en.wikipedia.org/wiki/Social_Insurance_Number#Geography

I haven't done a micro benchmark but based on gut feel this should be more performant.

This can be improved a bit at the expense of duplicating code by having a separate code path if you assume no spaces or symbols in the input.

In addition you can use the following code to generate valid SIN numbers:

Not the answer you're looking for? Browse other questions tagged java algorithm swing checksum or ask your own question.