VBA Text Array - Scan two columns rather than one

I have some code which is designed to scan columns F and G for occurrences of words found in an array, the array containing text found in column J.

Column J contains free text from a field in SAP. Being free text, it could be "Kerry John Pub Expenses" or "CATS O/H Kerry John", or even "CATS John Kerry O/H". There is no data entry standard for this field... and this is what makes this task difficult.

Here we have 4 rows of data, "John Citizen" is located in row 3, therefore the blank cells in columns F and G, row 2 can be populated with his first and last name.

The first thing I would address, is the indentation. Improving code that isn't properly formatted is just... not right.

Here are the signs:

Next thing I would address is the naming. Improving code where you have to quadruple-check every change you make because you're not sure you're changing the right thing is just not efficient. Using meaningful names for all identifiers fixes that.

Starting with the method's name itself:

Typically, VBA (VB in general) method names are PascalCase, for better readability. That would make it ArrayColumnMatch - but good method/procedure names should also start with a verb. What's this method doing exactly? should be answerable by simply looking at it's name.

The problem is, the method in question is doing too many things, so giving it a meaningful name is hard. But I'll get back to that.

Avoid chopping off identifers, like typ when you meant type - but then Type is a reserved keyword.. the solution isn't to make it less readable! I'm not sure which worksheet Range is referring to because Range is an implicit reference to Application.ActiveSheet (and that's very bug-prone!), so I'll just assume you meant to call it documentType.

txt is another meaningless name (heck, people use that as a prefix for TextBox controls!): it stands for that manual entry field you're trying to parse, right? How about targetFieldValue, or manualTextField?

Local variables are typically named in camelCase, so I and J would be i and j - those are typically used for iterating loops as you're doing, so I'm not going to complain about those, except both loops seem to be iterating the very same rows on the active sheet (whatever that is), and they're nested, too... and since they're row numbers I'd typically name them xlRow[WhatItsFor].

Always, systematically, consistently, automatically, thoughtlessly stick Option Explicit at the top of every VBA module. Don't question it, just do it: without it, you can have a bug by simply having a little typo in an identifier name. With it, your VBA code will refuse to compile and run if an identifier isn't declared anywhere. Use it. Always.

If match_txt is declared outside the scope of the procedure, then move the declaration inside that scope - it doesn't need to be at module scope. Always declare variables at the smallest possible scope; globals are evil.

A very minor point, but I have to mention it.

Avoid using an empty string "" to mean no value. VBA defines the constant vbNullString specifically for that. And why should you bother typing vbNullString when "" does the same thing?

That's the thing. It doesn't do the same thing. "" is a full-fledged String value that needs its own allocated memory space. vbNullString is a null string pointer that's not allocated anywhere. Of course it's a very minor performance hit to allocate that string, but semantically, vbNullString is the right thing to do.

Don't believe me? Try this in the immediate pane (Ctrl+G):

I get this output:

There's some kind of optimization going on under the hood though, so the pointer for "" will be reused every time it's encountered in your application's lifetime - as I said it's a very minor point. But just as you wouldn't declare an unused variable, you shouldn't allocate a memory address for a built-in constant value.

And then a few lines further, you have that:

You're iterating all elements of txtArray twice, when once would suffice. Also, wouldn't the last row of column "G" be the same last row as in column "F"? Wouldn't that last row be the same for every iteration of T? I'm asking, because your data seems to be laid out in a table with records, so you'd only need to find the row for the last record, whichever column you're using for that is irrelevant, no?

I'd extract a variable here, and assign it to Range("G50000").End(xlUp).row before the For Each T In txtArray loop starts, and then do

Wouldn't that do the same thing then?

Lastly, the J loop looks like it could be implemented as a Find instead of a loop.

The problem is, the method in question is doing too many things, so giving it a meaningful name is hard. But I'll get back to that.

So here we are. What's that method doing actually?

Extracting methods is a refactoring operation, and doing that manually in VBA is, honestly, a pain in the neck.

I've authored a refactoring tool that does exactly that (and more): 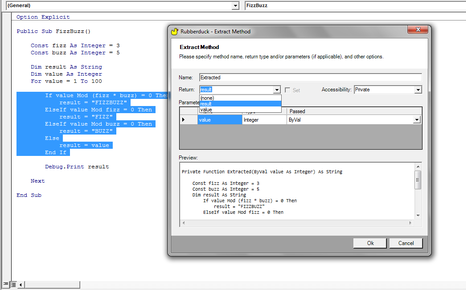 Of course I have a little bit of a vested interest (very little - it's free and open-source actually), but I'd recommend you take a look at what the Rubberduck VBE add-in can do for you.

Besides what @Mat'sMug said, there are a few other ways to speed things up.

In my experience, reading Excel cells from VBA is slow. You're iterating over a range several times. It probably would be faster to read those ranges into a VBA array and then loop over that instead:

Speed it up #2: Use the right data structure for the job

This is a key principle of software development. When you're repeatedly searching a set of items for a string, you don't want to store that list in an array (or an array-like structure like Excel cells) -- you want to store it in a hash table or dictionary. VBA didn't originally come with a Dictionary, but Microsoft added one after the fact as part of the Microsoft Scripting Library. https://support.microsoft.com/en-us/kb/187234

You'll need to add a reference to "Microsoft Scripting Runtime".

So, instead of loading into an array at startup, load column G and column F into Dictionarys. I also suggest using meaningful names.

Now you can check whether an entry is in each Dictionary in a flash:

10
Cleaning up and reformatting imported data in an Excel sheet
4
Assigning entire column of data to specific column of an array in VBA
4
Compare and find duplicates in 2 corresponding columns in 2 sheets
8
Making a report from payroll details
1
Combobox with search suggestions
4
Sub that compares 2 columns fast
2
Copy Certain Cells over to another worksheet based on column headers
5
Copy Columns Forward Macro: From Procedural to OOP