I need to decode and encode TLV (Tag, Length, Value) data which is a composite part-whole tree structure.

Therefore, I've decided to use the Composite pattern for the TLV objects:

And here is the way I create a sample composite TLV object (please note that the real-world TLVs are not this simple and their values could be parameterized):

As the creation of the cTLV3 is complex, error-prone and is done via several steps, I have decided to use the Builder Pattern to create my TLV objects: 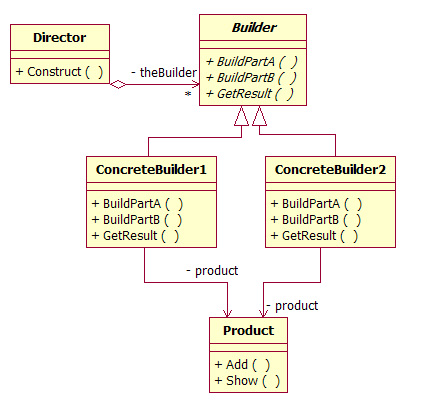 The problem is that I don't know how the Builder abstract and concrete classes fit in my design. I think the Director class of the pattern suffices for me:

And the implementation of the Director:

Here are some observations that may help you improve your code.

It seems to me that the Builder pattern is overkill for this application. Simply put, you have a TLV that might be either simple or composite (which are your PrimitiveTLV and ConstructorTLV classes). Since it seems that your primary interest is in the Encode() and Decode() methods, let's step back and ponder what we would like to be able to write without yet worrying about the mechanics of how this might be done. Your own proposed code looks like this:

This is peculiar to me in a few regards. First, if there are only five types of TLV, none of which have any supplied parameters, it would make more sense to me to simply have the five types statically created as constexpr and use them where needed with no runtime overhead at all.

However, it seems unlikely to me that this is really what you want. Instead, it seems more likely that you want a flexible means of making either simple or composite TLVs and that regardless of whether they're composite or simple, you'd like to have both Decode and Encode methods.

Your MakeTLVA() method includes these lines:

However, this has some problems. First, a std::string is just an alias for std::basic_string<char> and a char can be either signed or unsigned -- it's implementation defined. The result is that bytes += 0x91; treats the number on the right as a signed int with the value of 145, and tries to put it into a char which, if it is signed, may only have a range of -128 to +127. You probably don't actually need or want signed values, so I would recommend that you use std::vector<unsigned char> instead of std::string here.

The TLVComponent has a member mLen which is defined as an unsigned char, but that would limit even a composite TLV to a maximum length of 255 bytes. In many such applications, that's too short and it would be better to be declared as unsigned, but perhaps your application only needs small TLVs.

The GetTag() method probably just returns the tag value and doesn't alter the underlying object. Because it's both short and const I'd recommend putting it into the header file that way:

The same is true for GetLen and probably some other methods.

Use consistent naming schemes for objects and methods

The AddTLV() method is apparently supposed to throw an exception if it is called on a PrimitiveTLV. If that's the case, why put it in the interface at all? Instead, omit it from there and from the base class and only add it to the composite TLV class.

Omit the length because it's implicit

Since the underlying representation is at least partly a std::vector, you don't need to additionally store a length. Instead, simply calculate it as the length of the vector plus 2 (= 1 for mTag and 1 for mLen).

Here's what I'd rather write instead of your MakeTLVA() code:

That can easily be accomodated in C++11 using a constructor that includes std::initializer_list. Specifically, you could use this:

Naturally, you'll need to #include <initializer_list> for this constructor.

Create a constructor that accepts other TLVs

After you've created your ConstructorTLV class out of other TLVs, there is no way within the interface to access the enclosed TLVs. If that's acceptable, then all you really need is the PrimitiveTLV class posted above augmented with a constructor that takes a list of other TLVs. That's just a little more complex than the constructor above. Here is the other constructor:

Try it with a test driver

It's always good to have at least a simple test program to try out a new class. Here's what I used:

Here was the result of running that program:

As you can see, all of the length calculations and creation of composite TLVs was handled very simply using only a single class. For that reason, I have actually renamed it simply TLV. In real production code, you would want more sophisticated handling for the length and the length encoding (for example, if the length is larger than would fit in a single byte), but it is not difficult to add this.

Not the answer you're looking for? Browse other questions tagged c++ design-patterns or ask your own question.