I want to sort "movie search results" to get most probable movie that match "search".

I have a NameMatcher class which extract "title" and "year" from file name.

Results come from many websites like TMDB, Rotten Tomatoes, ... and much more. Only one website (API) is used for search, so the sort is only on what API return.

I use Levenshtein (I think Damerau-Levenshtein is not better for this case) and Jaro Winkler algorithm to get similarity between "search string" and "result string".

I added a "bonus" with arbitrary values if year is almost the same (year +- 1) and if "result" has an image (A film with an image is more likely to be what we are looking), then I get an Integer called "sim" to perform sort.

Next I get the best "sim" and if "sim" is greater than a threshold I sort the list. The last part are here because I do not have any database,... so my sort can be worst than current order in some case (E.g: "search string" with bad words, or "result string" in another language). 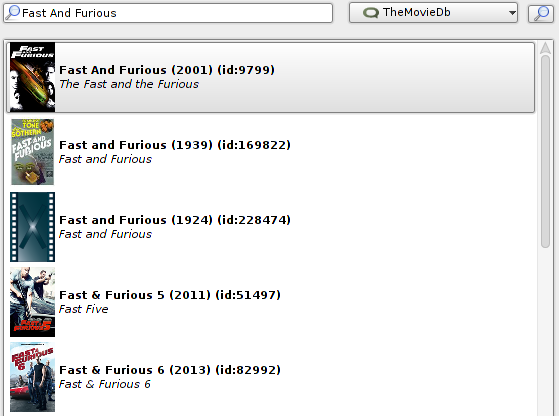 This "algorithm" get correct result even if it was written quickly.

How can I improve this sort? I mean, maybe there is an algorithm that can help me to improve this "dirty sort", or someone have an idea for a better sort. Any suggestion to improve sort results are welcome.

This "dirty sort" works well but I think it can be more "smart" but I have no idea how to make it better.

Note: Results list List<T> list is small (never more than 50), so if the sort algorithm is heavy it's not a problem, and there is already a cache on it.

If you've got only "little" improvement, this is fine for me.

For example, if two results (or more) have the same "sim" number, maybe a small algorithm can be added here to define which is the best. Or maybe improve "bonus" part with something more stronger than "random values".

The code above is just to understand, mistakes, ... doesn't matter. The main goal of this question is about similarity algorithms which exist and can be useful in a case like that or either a different/better "scoring system". Answer can be generic and not specific for this case (I will adapt it), it can be math, pseudo-code (or code), algorithm or either a suggestion (e.g: don't use levenshtein distance but instead this because ...).

I'm sure this can be really improved, current algorithm is more a "random stuff" than an algorithm thought/thoughtful.

Use a Comparator to sort

The way you implemented the sorting is really convoluted. There is a much more straightforward approach: use a Comparator!

Something along the lines of this:

Then, given a List of movies, you could sort them with:

Don't Calendar.getInstance in a loop

The Calendar.getInstance call actually creates a new Calendar instance every time. This can be expensive. Don't do this in a loop, get a Calendar once and reuse it.

Even better, if you only need the year, then get just the year once and reuse it.

This can be done simpler:

You can move values inside the if statement, because if it's not null, then the list is already inside the map. Like this:

You didn't include the source code of IntegerDescending, but if it is what it sounds like, then this will be equivalent, no need for a custom class:

Would be simpler as:

Actually you could replace the if-else chain with this:

I'll leave the efficient sorting algorithms to the experts. I like your approach of using a descending TreeMap.

This bit stood out to me. A for loop that doesn't actually loop is considered a bad practice. You can call maxSim = values.keySet().iterator().next(); instead. If values is allowed to be empty, then add an isEmpty check before getting .iterator().next().

The common convention is to use camelCase for variable names. It seems most of your code follows this but in your sortAccurate method tocompare should be toCompare.

If you can use Java 7 or later (strongly recommended), and unless you're using an anonymous inner class, you can employ the diamond operator. So instead of:

You can type just:

This appears to be an error (the same getSimilarity() call twice)

Not the answer you're looking for? Browse other questions tagged java performance algorithm sorting edit-distance or ask your own question.