I wrote a class to represent a set of lights in a 2D game that raycast in order to find shadows. The draw method does a lot of calculations and takes a lot of time. Mainly, the adding of areas and clipping takes from 1 to 12 milliseconds per loop. Is there any way to speed up this method?

The whole project is on Github.

(Note: The first part of this answer was written without a detailed analysis. See the "EDIT" below for an update)

An interesting question. Some (possibly minor?) remarks and hints.

(Disclaimer: I currently can't do a dedicated performance analysis with VisualVM & Co. So You should consider the following only as hints, and possible points to look at, but not as a "todo list". Modifications of existing code that aim at improving the performance should be done step by step, and interveaved with detailed benchmark and profiler runs.)

Finally, two links to questions on stackoverflow where I wrote answers that contain "building blocks" that may be useful here. Note that these answers did not primarily aim at achieving a particularly high performance, but ... I did not try to post rubbish there either, so there might be some useful snippets involved:

(By the way: Extending the program from the first answer to create "soft" shadows was still on my todo-list - I'll probably try to combine my answers and try to achieve the same effect as in your program, to see which of these approaches perform better and where the potential bottlenecks are)

EDIT Extended based on a further analysis

I performed some tests, mainly with jVisualVM, which showed that the main bottlenecks are not the usual suspects like the geometry computations or other high-level methods, but really in the low-level ones: Most of the time seems to be spent...

and, the largest block:

I've seen that you are already using a FastBlurFilter (by Romain Guy - he usually knows his stuff...), which internally exploits the fact that the blur can be implemented as a separable filter. However, this could possibly be implemented even faster through parallelization. A quick tests indicates that this might bring a speedup, but your mileage may vary (depending on the CPU, the image size and other factors...). However, you might try replacing the blur function of this filter with something like this:

(This was just quickly created by extracting the core of the method and parallelizing it pragmatically - it may be cleaned up and improved).

The GraphicsUtils#glowFilter method might be parallelized similarly, but there, the parallelization might imply an overhead that eats up the performance gains (though I have not tested it).

An aside: When you call Graphics g=image.getGraphics(), you should eventually dispose the graphics object, by calling g.dispose() when you're done with it. You did not dispose the graphics, for example, in the Light constructor (but I have not systematically looked for this).

Apart from that, it's not so easy to make this program faster in its current form. As mentioned in the first part of the answer: I also tried to implement something like this, based on my other answers on stackoverflow, but in its current version it's far slower than your approach. Although it looks a bit nicer, I think: 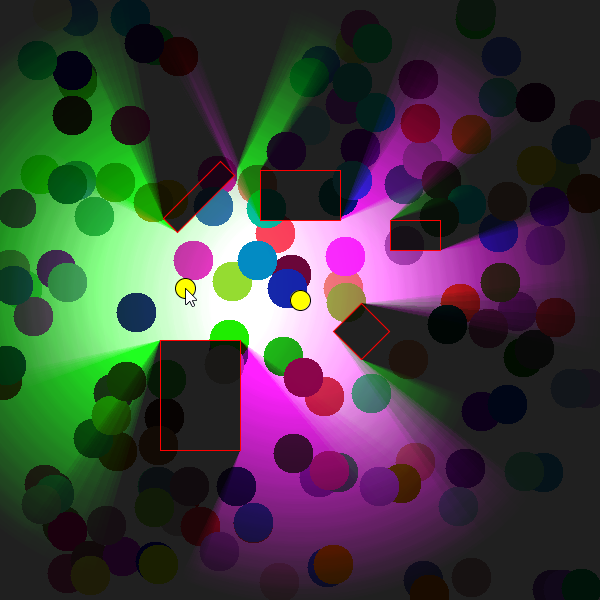 (I tried to properly mix the lights: A magenta light and a green light should yield a white light - things like this don't come for free...).

But, the same as with your approach: Making the shadows soft definitely IS expensive.

One could try to think of a completely different approach here, I'm sure the computer graphics / OpenGL community already had some ideas about this. But this is beyond what can be discussed here...

It doesn't make much performance difference, as you don't call the SmoothLight constructor enough to matter. However, you repeat several calculations unnecessarily.

I also changed it to only calculate the radian version of i once rather than twice.

I also created another version that loops in radians rather than degrees.

I didn't get around to figuring out whether that's faster or slower. My thought is that it should be faster, as it does fewer calculations per iteration. However, it replaces integer multiplications with floating point addition (and comparisons), so it may not be better. It's also possible that the compiler is smart enough to compile out any difference that might exist. In my tests, they seemed to run about the same.

Not the answer you're looking for? Browse other questions tagged java performance game computational-geometry graphics or ask your own question.