I am working with an undirected, weighted graph. It contains two types of nodes, called "A-type" and "B-type". I am starting with a set of tuples of the following form that describe the graph edges: 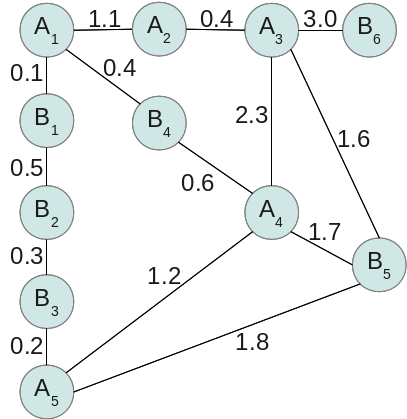 My goal is to reduce the graph by removing any nodes of B-type that have exactly two neighbors, and their associated edges, and replacing them with a single edge that has a weight equal to the sum of the weights of removed edges. The reduced version of the example graph would look like this: 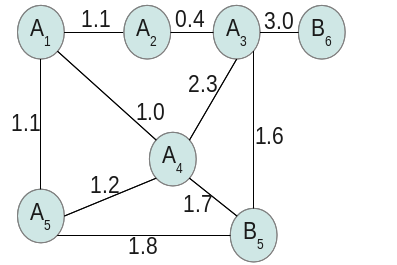 And printing the set of edges after reduction would produce this:

I am looking for suggestions regarding:

This code is going to be part of a company-internal project, so I had to remove descriptions of what the actual node types are, and have described them as "A-type" and "B-type". The only differences between this code and what will be used are the regular expression for determining node type, and the node type references in the docstring/comments.

If you look at the Wikipedia article on graph representations, you'll see that it describes three common data structures that are used to represent graphs: adjacency list, adjacency matrix, and incidence matrix. Notice that the representation you've chosen (set of edges) does not appear. This is because:

So the first priority is to transform your graph representation into a more convenient data structure. We could use a package like python-graph, but it's not hard to write your own. Here's a graph implementation using the adjacency list representation:

Using this data structure it is easy to implement the algorithm:

The code would be even simpler if you were able to use the adjacency list representation throughout your program: then you'd be able to drop the conversion steps.

Not the answer you're looking for? Browse other questions tagged python python-3.x graph or ask your own question.