I am pretty new to Swift, as a solo developer I was wondering if somebody could pass comments on the singleton implementation below. The code does work, but being new to Swift and knowing that there are a lot of gotchas, I wanted to get some feedback from someone more experienced.

You could simplify the above significantly:

First and foremost, printing text to the console is absolutely pointless for an iOS application. It's okay to do it as an easy way to test whether our code is working as intended, but we don't want to mistakenly leave this in the final release build.

So, step 1: Follow the instructions in this StackOverflow post to set up a custom compiler flag for your Swift project.

Step 2: Wrap all of your println statements in #if DEBUG and #endif.

Now our debug builds can print useful debug statements, and we won't accidentally forget to remove them when it comes time to compile our final release build. Perhaps more importantly, we won't have to waste time putting them all back in after we make the final release build and start adding features or fixing bugs.

I highly recommend either making a function to do this debug printing:

Or just make an Xcode code snippet out of the following:

And set the autocomplete to "println" 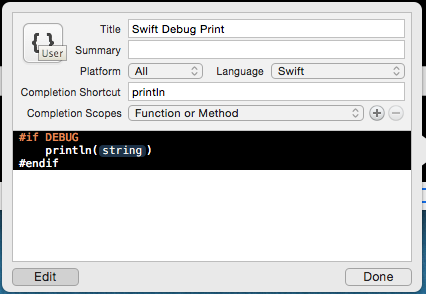 By doing this, any time you type "println", Xcode will try to autocomplete into the above snippet, and "string" within the parenthesis will be selected and ready to be overwritten by your typing. I have a similar one for Objective-C if you're interested: 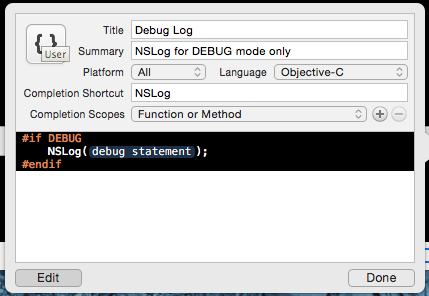 First, we don't actually need a class method to get the shared instance. I would go with Rhuantavan's static let suggestion.

Why would I write this:

When I could just write this:

seems a little awkward versus:

but it gets even worse if we compare setting the score to a specific number.

I'm not recommending what's best. It's certainly very possible that you don't want the user modifying the game score directly. But if that's the case, make the gameScore property a private variable, and implement more methods plus more safety checking on what's actually happening in these methods. Or if you don't mind them modifying the game score directly, just eliminate the unnecessary incrementGameScore method entirely.

Generally speaking, in the few instances when we actually want a singleton pattern, the class doesn't work out that great when people instantiate other instances of the object. The class is designed with the assumption that it will always be used as a singleton. Too often though, developers make the mistake of not putting in any safeguards to prevent the object from being instantiated.

Let's not make that same mistake.

In Swift, it's as simple as marking the init method as private:

Now if we try instantiating an object of our class in any other Swift file, we'll get a nasty error:

(I named my class SwiftSingleton)

This is what we want. If it's a singleton, we probably don't want people to have other instances available... so don't assume they won't try. It's easy enough to completely prevent it!

As some final parting food for thought, we really need to delve far more deeply into why we're making a singleton class at all. In all of my professional experience as an iOS developer, I've never needed to use a singleton, that I can recall.

When I was a less experienced programmer, I felt that a singleton was the answer to my problems of trying to pass data between various objects (or more likely, between view controllers). But it's not the right solution.

Do you actually need this singleton? Would it not be better to just have some sort of GameScore class that gets passed around among the objects that need to modify or read the data that the GameScore class holds?

In my opinion, most use cases of singletons are the lazy approach to actually learning how to pass data between your objects appropriately.

The other answers have already commented on other aspects of the code; I'd simply like to leave here my preferred way of implementing singletons in Swift:

To use the singleton:

As you can see, there's no need for writing sharedInstance all the time, and you still get thread-safety and lazy instantiation for free. The only gotcha is that you have to slightly change the name of the class, because the variable and the class must have different names (I personally add Class to the end).

Most of the other answers cover everything in a very detailed and accurate manner but I want to highlight some of the practices that I liked to preach when it comes to singleton classes.

I used to create a singleton and then all the public methods in the class were static. These static methods called the then call the replica instance methods using the private sharedInstance

As its a singleton all my method calls are going to be using shared instance ONLY so why specify it again and again.

and call will be simply

UPDATE Just for a variation if you need to initialize some member variables in your singleton. You can do something like :

Not the answer you're looking for? Browse other questions tagged beginner ios singleton swift or ask your own question.