Get table header name in excel

I'm trying to get table header name in excel. I tried it using index, IF and MATCH. It works but I am not sure whether my formula is the best or not.

This is how my sheet looks: 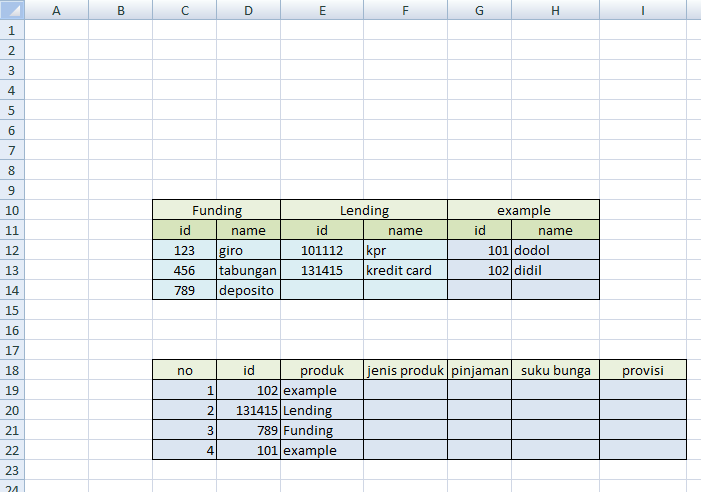 You have hard-coded the 1, 3 and 5 column index... and you don't really have a choice, given the shape of your data.

The problem is that your table is not a table: it's essentially a pivot. This would be a table: 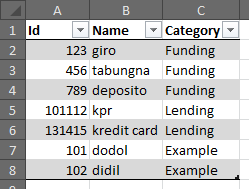 If you can un-pivot your top table into an actual table like above, then you could have a much simpler, easier to read (and to maintain!) table formula - given a Table1 table name for the above table:

By laying out your data in a table, you make a database-friendly list of records that can easily be sourced from a CSV or XML file, or directly from a database table or view.

Having 3 times the same [Id] and [Name] columns under a different heading, looks like you have 3 identical tables, with different values: by combining them into one (and adding a column to identify which of the 3 tables it's coming from), lookups become much, much simpler.

Other than that, I would add the following:

That way you can replace the hard-coded 1, 3 and 5 by "Funding", "Lending" and "Example" in your formula, giving a meaning for these numbers:

But I would really push to remove the first-level heading and turn it into a column: logically, it's a piece of data - it belongs at the row level, not as a heading. Your worksheet will be much easier to extend that way.

Not the answer you're looking for? Browse other questions tagged excel or ask your own question.