For the sake of full disclosure, this was written with bananas, not apples. The doctor may not be kept away. 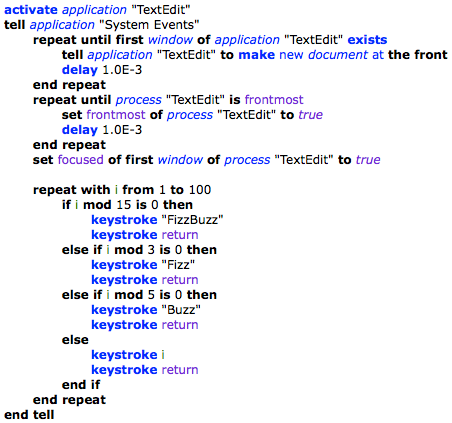 I borrowed the logic for appropriately waiting for "TextEdit" to be ready to receive text from this excellent Code Review answer.

I feel like I want to write functions... but I don't know what's available in AppleScript for modularizing code... err script... I'm just getting my toes wet here.

It may be fun watching it type out FizzBuzz, but interacting with the UI directly has its pitfalls. For example, if the user focuses a different application while your script is running, you will now be typing in the wrong place; and if you refocus the application, that could be annoying.

Fortunately, there is a better way. Rather than activating the application, waiting until a window appears, and making the window frontmost, you could just…

This is much less problematic. The only issue is if TextEdit is already open, in which case it will overwrite the existing document. In that case, you could use

Either way, you’re not interacting directly with the UI any more, which eliminates a lot of potential problems.

The main problem that I see is the lack of separation of concerns. The FizzBuzz code has no business being run in the System Events context, and it ought to reside in its own handler.

I've factored out the keystroke calls as well, since they looked repetitive. Since you opted to use the simulated keystroke option to output the text instead of just telling application "TextEdit" to set the text of the first document to the fizzBuzzOutput, you really ought to go all the way and make it type out slowly, like in the movies.

With those two handlers in place, you would call

Note that there doesn't seem to be any need to tell application "TextEdit" to activate.

Not the answer you're looking for? Browse other questions tagged fizzbuzz applescript or ask your own question.

32
Script to enter text in a box