I have a very big Matlab simulation project in my hands, which I wanted to optimize, since I'm running it many times to tune parameters and the like.

Using Matlab's profile I identified one function that is eating up most of my time, specifically the output(i,1) assignment line.

This function is called a LOT, where input is a 10x1 double passed as an argument, and output is also a 10x1 vector.

If you look at all the calls to mean, you see that what you are calculating in each loop is a "Cumulative moving average", but in the oposite direction of what one usually would do.

A cumulative moving average can be calculated quite simply using the cumulative sum, cumsum, and dividing by the number of elements. Since you're starting with all elements and up with only one, we need to flip it.

The running mean, (or cumulative moving average) can be calculated like this:

The maximum value of each row of a matrix can be found using max(A,[],2), where the number two represent the second dimension (columns). So, the values we want to use are:

In addition, we need to append the last element, so:

To summarize, the entire operation requires no loops, one call to cumsum, and one call to max. In addition we need to flip it twice, but that takes virtually no time.

In total, your function can be written like this:

Time in Octave shows the improvement, as a function of vector size. For vectors with only ten elements, the execution time is 25% of the original code. 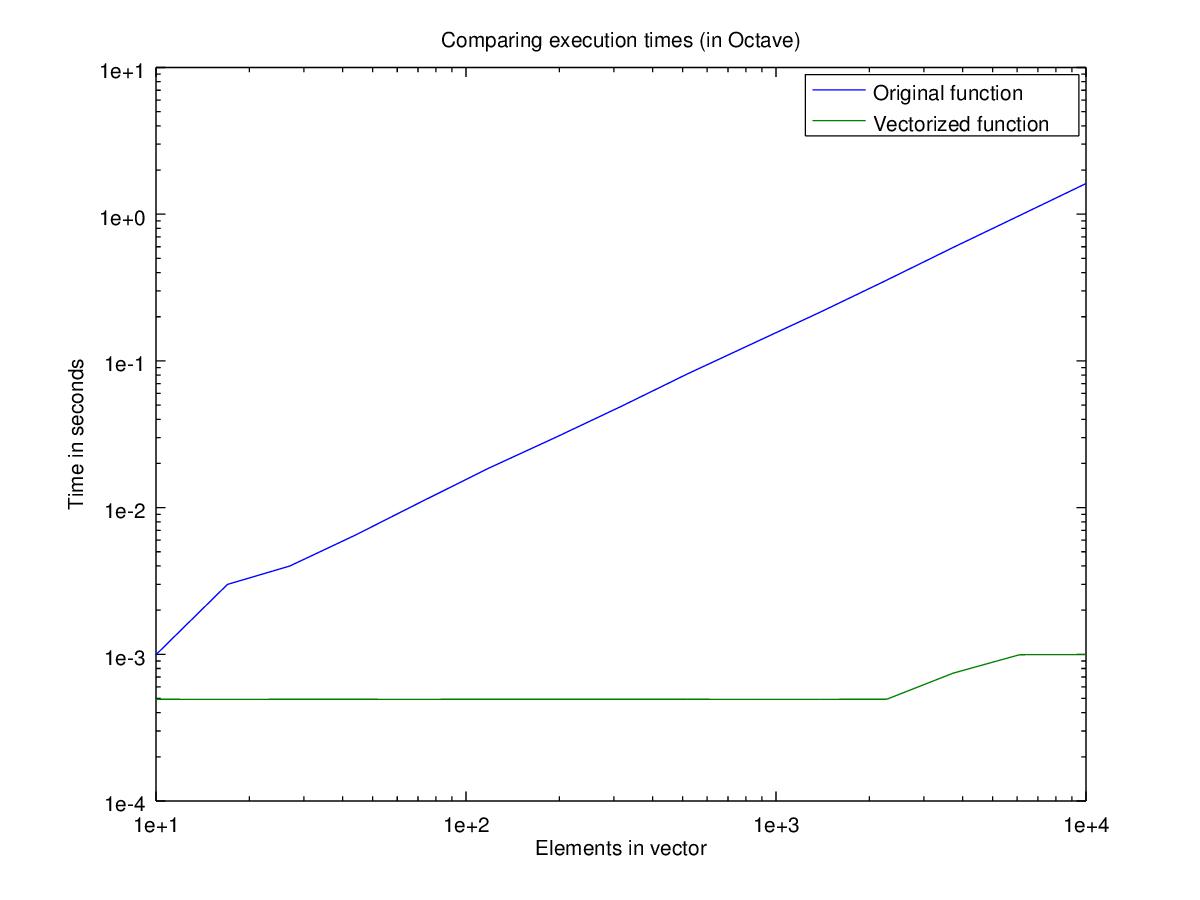 Review of your code:

There are a few things I don't like about the other reviews that I want to point out:

Warning: I don't have Matlab installed and haven't done much with it, so my syntax may be off.

The downside of this approach is that you have to sum up and divide the array for every entry. I think it would be better to do the end first and keep a running sum. I'm not sure of syntax, but I would expect that to look something like

Again, apologies if my syntax doesn't work. Hopefully this illustrates what I'm trying to do.

I stuck with the syntax that you were using in case I didn't understand syb0rg's comments properly.

Note: if you do this, don't forget to re-profile. It may be that there is an optimization on calculating the mean that outstrips the theoretical advantage of this approach.

Not the answer you're looking for? Browse other questions tagged performance matlab vectorization or ask your own question.