To get used to Haskell, I wrote a little program using the Diagrams package which generates 100 random dots (larger dots are more likely to be in the center). 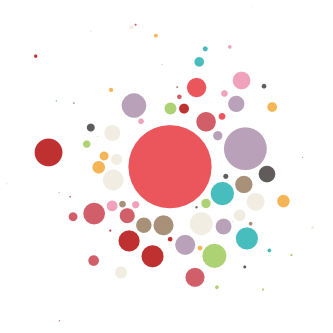 I'd suggest to change the type signature of randomDots to

as there is nothing IO based there. And then change main to

Nitpicks: I'd put tooClose before randomDots so that the functions are in logical order, but that's just a matter of personal preferences.

Otherwise I also quite liked the code.

Update: Some further thoughts: Function randomDots is concise, but it also mixes several concepts together. Namely:

So I'd suggest to split the function into even smaller ones, each targeting one of these problems. While the resulting code is larger, I believe it's easier to comprehend and more maintainable in the long run:

This function is also available in monad-loops. Then:

Both these functions are polymorphic with no coupling with RVar. The final function is then expressed just as

I really like your solution. The only note I would make is that RVar has an Applicative instance which makes writing code in a declarative style a lot easier. It's entirely a matter of taste as to which one you prefer.

Not the answer you're looking for? Browse other questions tagged haskell random graphics monads or ask your own question.