I have a problem: build a tree relationship parent/child like this one: 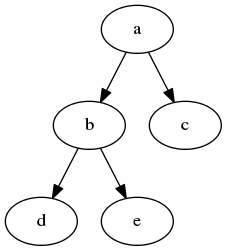 Can you review this piece of code please since I am convinced it could be improved?

I write a comparison function for a sort :

a function to get the parent:

Two functions to push the children:

A function to initialise the "tree":

Your implementation requires std::list so the interface should have the line #include <list>.

The code currently uses a class named item which is a very generic word. A more descriptive name would be Tree. Also note that, while not compulsory, a common convention in C++ is to use capitalized names for classes, and lowercase names for instances of classes and other variables.

Some of your functions, such as compareChild use camel-case, and others, such as PushChildren start with a capital letter, and others, such as initialize_tree use embedded underscores. This inconsistency makes it harder to read, understand and maintain the code. Better would be to use a convention consistently. There are many different ones out there and some, such as Google's are available on the web. Pick one and use it consistently; consistent use is more important than which particular convention you use.

Because you're writing in C++, it would make sense to have methods that operate on a class such as Tree (using my suggested rename of item) be member functions rather than separate functions. For example, when I re-implemented your code as an object, I got this:

Note that one of the things I added was a means to print out the tree. That kind of thing can be very handy for debugging.

Modern C++ doesn't really need pointers very often. It's usually better to either use a smart pointer, such as std::unique_ptr or simply use objects or object references. For this code, that suggests that instead of children being a std::list<Tree*> that they would probably be better as std::list<Tree>.

If you don't use pointers, you have much less reason to use new and delete. But if you do use new, each instance of new must be matched to a corresponding delete. Often the best way to do this is to put delete in a destructor.

The only real difference, of course, is that by default, the members of a struct are public, while the members of a class are private. Still, it's best to keep the internals of a class private to reduce linkage among objects to only what they need. This simplifies the interface and therefore the maintenance. If, for example, you wanted to use a std::array instead of a std::list internally to the Tree, it shouldn't require that any code using the tree is affected.

NULL is a macro from the C library and its use in C++ is very outdated. Start using nullptr.

Use auto for compile-time type inference:

std::list<item*>::iterator is very lengthy and easy to mistype. This can easily be improved with the use of auto.

Use references whenever possible:

C++ references are safer than pointers. You should give them the preference.

Note: As @Edward commented, compareChild() should instead be a comparison operator of your type, in this case item (still use the references):

Deeply nested logic can get very hard to read an follow. If you can return early, do so. It will make your code simpler and more straightforward.

2
Compare 2 unordered, rooted trees for shape-isomorphism
3
Check if a string is palindrome or two strings are the opposite of each other
10
Generic binary search tree in C++
3
Java n-ary Tree class with custom made methods and nested Node class
2
Execute promise tree in order of declaration
11
Recursive search on Node Tree with Linq and Queue
6
Implementation of container searchable by any element
3
JSON Data-structure in C++ and querying it