Most of my programming experience is with Objective-C, but I have recently started learning Java and JavaFX to build the user interface for a Trading Card Game. This is the most Java I have ever written, and I am completely new to JavaFX as well, so I am sure that there are lots of problems with this code.

I mostly used Scene Builder to layout the scene itself, but I manually edited the FXMLDocument file also to accomplish everything. I am not at all sure that I am doing things the right way here. I have tried to make the code as readable as possible, but many objects are created programmatically and not with Scene Builder so I am not sure that everything will make sense to the reader.

I should note that I tried to use only Panes for containing the information and for rendering it, but I had issues with the scene not updating properly. To solve this problem, I created Lists that contain the Groups that the scene will actually render. This separates the rendering from the creation of the objects being rendered. I think this is a good approach, but I may be wrong.

What I am looking for are best practices for Java, as well as any Java features I may not be using that I should be. Also the readability of the code is always very important to me. Don't worry about being harsh or critical, you won't hurt my feelings.

Here is a sample image of the GUI in action. I should note that it is a prototype for the purpose of testing the game as quickly as possible, so it is ugly: 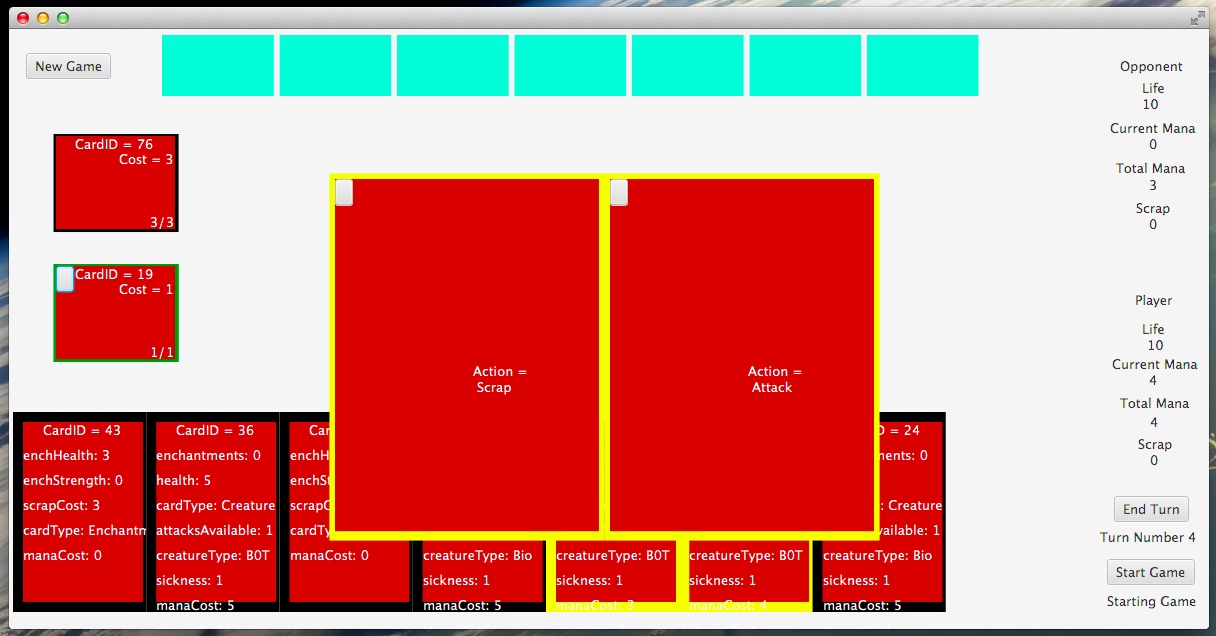 First things first, this is the class that is the launching point for the program.

This is the meat of the program, where the user interface is controlled and commands are sent to the Game:

Finally, this is the FXML file that controls the layout for all the objects that are not created programmatically:

Your JavaFXGame class can use javadoc

The start method can be shortened and cleaned up:

Even though the specification from the Application class specifies that throws Exception, you can declare it as the following:

Specifying the exception more is allowed in an overridden method, it is also allowed to get rid of it completely (although that's not necessary here as that would require a try-catch inside the method). This doesn't break the contract.

You have a comment for main which looks a bit like Javadoc, but please use real javadoc instead:

Taking a look at just the first part of your other class and we can see that it is filled with unnecessary comments and other fluff:

You have several unnecessary comments here (although I understand some of them are because you are new to the language).

You seem to be very inconsistent in using private on the fields. Remember to use private whenever possible.

It is standard practice in Java to keep all class-variables (a.k.a. fields) at the top of the class together. This makes a typical Java class have the order 1. fields 2. constructor 3. methods. 4. static-methods (where you place the static-methods can differ, but they should always be put together whenever there are any).

On some occasions you seem to be doing this:

In such cases I personally prefer to return early to reduce indentation.

Also, you can use !gameHasStarted instead of comparing with == false. ! is the logical not-operator in Java.

This also applies to the handleTurnButtonAction method, but there you can simply remove == true as comparing with true is the same as returning the boolean directly.

Either way, there's code duplication there that is easy to get rid of. (Extract function is one way, but as said, consider changing the user experience)

createOpponentBattlefield, createPlayerBattlefield and createPlayerHand is way too similar. As the game model seems to use a Zone class, perhaps you should make a ZoneView class that is responsible for displaying a Zone.

There is also some duplicate code in markTargets, but I believe that can be handled by using a ZoneView class. Then you could call markTargets on each ZoneView.

Finally, I personally prefer a little bit more space when there is a whole bunch of annotations and fields together. Such as the following:

Alternatively, you can write the annotation on the same line as the field type and name.

I suppose this has some unimplemented functionality:

I would guess that options.getScript() is always null, unless CommandLineOptions has some magic in it.

The second line is too long. Having to scroll to the far right makes this hard to read.

Constant strings like "start.lua" should not be buried in the code, better to move them to the top into static constants. But actually, this bit doesn't belong to the game class.

Is it really the game's responsibility to deal with IO errors during startup? Not really. It's the responsibility of the launcher of the game. Move the all the launching (command line parsing, configuration) related stuff outside to a dedicated helper class.

You really have too much duplicated logic. For example:

These call for a helper:

This is just an example. Take a careful look through the entire code and make sure you extract all the duplicated elements to helper methods.

At first glance I thought this code won't compile, because early on, I saw these initializations:

... but not the variable declarations... I had to search through your code, and these variables are declared at various different places. This is confusing, and against the standard. This is the recommended declaration order: