I have an array of a instances of an enum type. A random double variable is initialized with a value between 0.... to 1, and should be used to get the closest value's enum instance to that randomly set double value.

I have implemented an algorithm which does that, using the array and few temp variables:

Basically it gets the closest Enum.getPercent() value in the list to alpha, and then returns the final closest TargetScope instance.

But I really feel bad about using this, where Java has an advanced collection API, which can be used better for this case, but I am not really as experienced with Collections API to use them for that.

Is there really a shorter way to perform this?

The idea behind this

I am working on a game-server plugin, which basically makes two players targets and have them fight each other. For a player to get a target, he needs his target-timer to hit 0, in order to let the system search for a target. Originally, the default target timer is 1000, each system cycle is 600ms, so 1000 is 10 minutes. 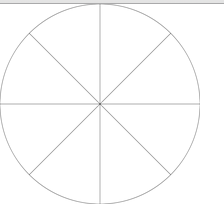 I need to let the interface know, what slices should be filled with colour, to let the player know when he can get his target. a fully coloured scope (circle) means that the timer hit 0.

Each interface slice has it's own id, as you see in the enum, int interfaceBase.

The interface updates every 10 seconds, per player (as in each player has its executor).

This problem can be solved mathematically much better than it can with a list, or collection.

What you have is 9 states, and a timer that counts down. The timer can be expressed as a proportion of 1. Because the states are all equally spaced on 1/9 intervals, you can just do math....

shift is needed to make the (int) truncation work. Your comment has made me think, and, in reality, it is not the most readable/understandable code. In fact it is broken, and shift should just be 0.5 always... Let me re-do it in the form of a round() instead of a truncation:

Then, you can use this with:

My Java is somewhat rusty but I think you could use a for-each loop to write something like :

To be honest with you, I have no idea what your code is supposed to be doing. However, wouldn't it make sense to define a method getInterfaceScopeByTime() taking the time you want to approximate as an argument instead of using the attribute time? It would make things somewhat easier to test/understand and you can always call the method with this.time if required.

From an algorithm point of view, depending on the number of times you plan to do this, you might find interesting to perform some preprocessing whose cost will be amortised to achieve better average performances. Among the different options. For instance, you can sort the values : if at a given step, the computed distance is bigger than the minimal distance, it means that you are getting away from the closest value and you can stop iterating. Otherwise, you can use a binary search to find the closest value.

With points mentioned above ,please find the modified code below

Not the answer you're looking for? Browse other questions tagged java algorithm collections timer or ask your own question.

3
Implementation of a unique collection
6
“Critter Tracking: When does it cross its own path?” Part 2
5
Loop through column cells and compare value with a Collection
2
Finding the sum closest to a target number
1
Find items in collection one that are the greatest value less than an item in collection two
13
Tick. Tick. *breathe* BOOM! - Setting up real, stable asynchronous callbacks with WinAPI Timers in VBA
3
Take element of a Set collection depending on the value of another element
0
Binary search to find the closest element