I wrote this program a while back that would allow me to set a delay, say 3 hours, and when the delay had expired, my PC would turn off. The purpose of it was so I didn't have to leave my PC on all night whilst downloading games. I recently tinkered with it to allow me to have my PC shutdown at a specific time. It works like a treat, but I was hoping on a few pointers to help make the code more concise / efficient / cleaner.

Here are also a couple of screenshots so you get the idea: 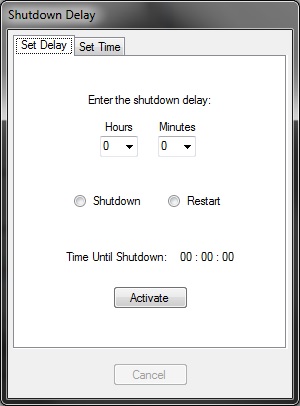 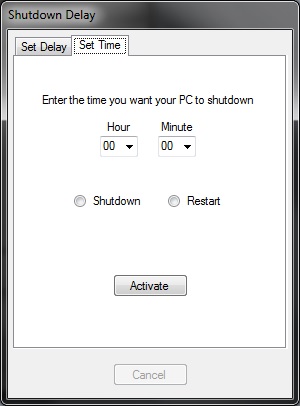 I can't resist mentioning this. These comments hurt me.

It's pretty obvious that you're storing seconds as an integer. The comments just clutter the code and make it noisy.

In frmMain_Load there's a lot of repetition. I would use a loop here instead.

It's more lines of code, but completely maintenance free if you should add another ComboBox.

I just noticed that all of the class variables are Public. Why? These should probably all be private. I can't think of a reason to expose them outside of the class.

As I briefly mentioned in the comments, DelayOrTime is a bit clunky. It has one of two possible values, 1 or 2. Magic numbers are bad. Avoid them. Normally, if there are only two possible states, I would recommend a boolean, but that doesn't feel quite right to me here. I would create an Enum and change the variable name to Mode.

Mat's Mug mentioned your Shutdown_Restart method. I don't like it either, but I'm not sure that I agree with his suggestion. I think it could be cleaned up by simply grouping the logic together correctly.

I recently tinkered with it to allow me to have my PC shutdown at a specific time.

That's what happens to code: it needs to change, at one point or another. The one major problem you have here, is that everything is stuffed in the form's code-behind.

From a design-pattern point of view, what you have is a Smart UI - the View is stealing the show, and contains the entire program.

This kind of approach is not always bad. It is fine if you want something quick and simple that isn’t going to change. For example if you want to create a quick demo, or explore how something works.

However, most of the time an application will change and that’s where things will get messy, particular if you have a lot of Smart UIs in one application.

Maintenance will get difficult. A supposedly simple change could affect anything else associated with the same class. Over time the code will likely messier and messier as more maintainers work with the same code.

What you've called frmMain is a class, a first-class citizen of the language you're using. Classes should only have a single purpose. If we agree that a Smart UI isn't what we're looking for, then you need more classes - think of what the responsibilities of each class should be.

Your Model is your data - in this case, it's bits & pieces of information, like:

You can write a class that's responsible for containing that information (here with a placeholder name):

The form is your View, and should be nothing more than that: the application's logic shouldn't be written in the form's code-behind, burried in button click event handler procedures. I suggest you look into the Model-View-Presenter pattern.

The Shutdown_Restart() method clearly is doing way too many things. In fact, it's such a central part of your application, that it belongs in its very own, specialized class, exposing two methods:

What's the difference between this:

You need a method that parameterizes the variables here, and write code once - you're repeating yourself.

You don't need to have this:

Two things: one has already been mentioned by @RubberDuck - the comments are maddening, remove them. The other thing is that by concatenating String objects like this, you're actually creating many more String objects than you think you're creating.

A String in .net is an immutable type. This means you're creating a whole bunch of objects. Let's see:

So 8 objects created, when all you really need, is to format a time span into a string. TimeSpan.ToString() can do that. vb.net isn't just a language - ".NET" is a framework, getting to know what it's made of can only be beneficial; I highly recommend you take a look at what the System namespace has in store for you:

If you're importing the System namespace in your code file, there is no reason to fully qualify System.Object and System.EventArgs - you can dismiss the namespace and simply refer to the type names, Object and EventArgs. Doing so removes clutter.

There is a lot more that can be said about this code. In my opinion the most pressing concern is the Smart UI. When you're done refactoring, the form should only be concerned with... presentation concerns; the actual logic belongs elsewhere.

I know you asked for Code Review but this feature has been built into Windows since Win98 (Nothing to install).

If you want to shutdown your computer after 3 hours, you could do this from a command prompt or your RUN window.

Not the answer you're looking for? Browse other questions tagged beginner datetime vb.net winforms or ask your own question.