Match a Simple Sentence or a partial sentence Suitable for matching

This code can also be downloaded from GitHub

There are a number of things that could be improved here.

You're doing the right thing with the pre-compiled regular expression/pattern, but, you have fallen victim to the little-known auto-format-muck-up-monster, and what I consider the magic-value-overcompensation issue:

Your code would look much simpler with just:

Now, the first thing you do in your match method (well, the second thing), is trim the string.

This is a relatively expensive operation because it makes a copy of the data, and a new String and char[] array instance. It would be much simpler to just incorporate the white-space in to the pattern... add \\s* at the beginning and end.

Similarly, you do not allow the value to start with, or end with, a single quote ', so incorporate that in to your pattern too. Then you may as well make the null-check a condition on the return, ending up with the code:

I would suggest a couple of arrays that contain passing, and failing values. Something simple like:

and then the test is:

Adding new test cases is much simpler this way, and the DRY-factor is high.

A few points on top of @rolfl's.

The ternary with the boolean variable matches is a bit silly:

This works just as well:

Using the message parameters of assertions

When you have a bunch of assertions like this:

An unfortunate thing is that when something fails, it's not super-easy to find which one it was. The message parameter of assertions can help, for example:

This way if the assertion on Nice. fails, the message will appear in the error message, so it will be clear immediately which assertion of the many failed.

Of course, duplicating the value under test inside the message would be silly, this is another reason why you need a helper method like @rolfl proposed. Here's another alternative: 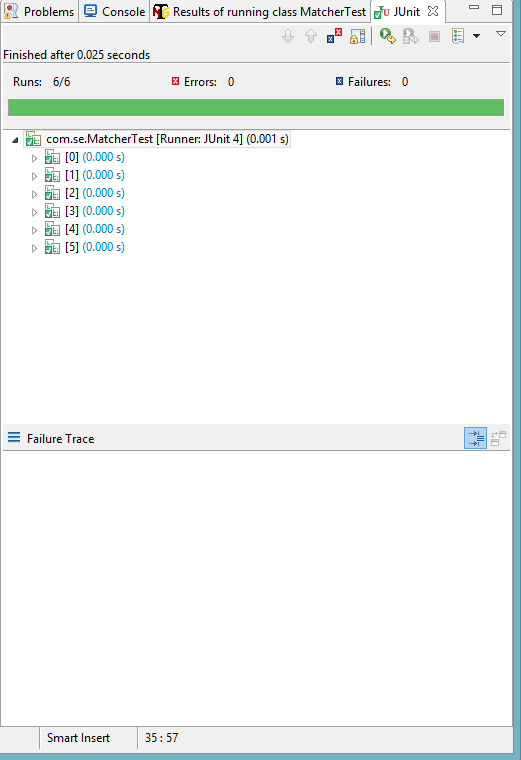 Eclipse's TestNG plug-in has an even better display of test parameters and results. The implementation is simpler too using @DataProvider method annotations, and you can specify multiple providers for multiple methods. Note: getTestDataForAll() is the same as the snippet for JUnit example above. 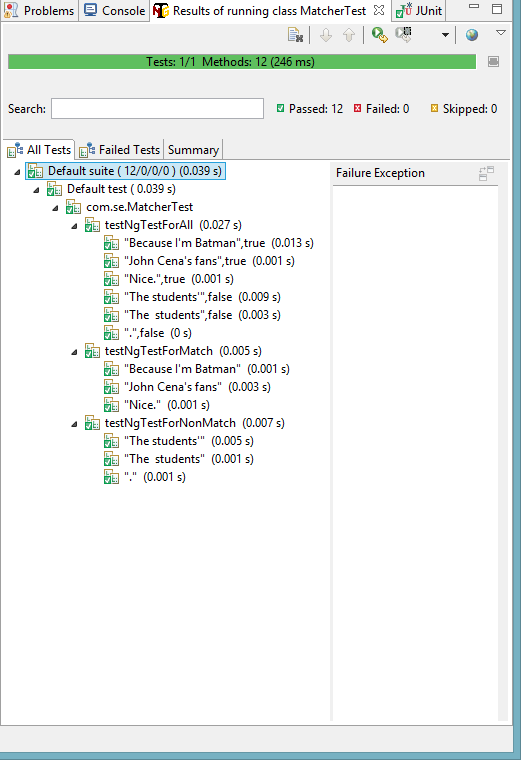 Not the answer you're looking for? Browse other questions tagged java regex maven or ask your own question.

17
Given a sequence of positive integers A and an integer T, return true if a continuous sequence of A sums up to exactly T
13
Validating UTF-8 byte array
-8
Find common “characters” in 2 given strings (rev5)