Inserting data in 3 tables of a database with JPA

I am starting a personal project and my first step is to insert a lot of statuses from tweeter in a database along with it's user and place (if applicable).

This is the database structure: 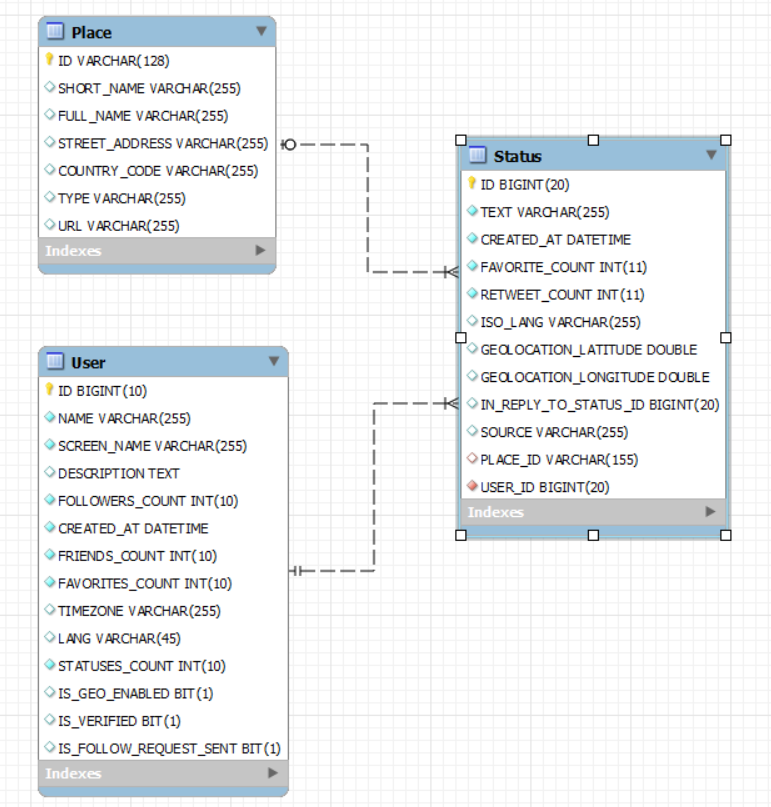 Pretty much a user or a place can have many statuses.

This is how I do it:

I have a very simple testing platform where when I press the insert button this happens:

My 3 classes derived from the database are:

Basically what I want to know is if there is a more efficient way of doing it and/or cleaner.

Well, it's not entirely bad, I understand that you need it because only your sqlmanagement.XXX classes are annotated with @Entity. You could improve the methods that you are using for it though.

First a nitpick: sqlmanagement is a class and should be written in PascalCase, so SqlManagement or SQLManagement.

Whenever you have this pattern in your code:

i.e. a sequence of objA.setXXX(objB.getXXX());

Then you should consider making a method in the class for objA, in this case:

This will hopefully make it easier to avoid forgetting one of the properties, and will significantly reduce code duplication if you're using it from more than one location.

You could also apply the Delegation Pattern to set the tweet directly and add setters and getters that would redirect to the tweet.

You could also use some serialization/de-serialization to setup your SQLManagement-related object easier, it is a bit of an overkill though to do it that way.

I like that you are using EntityManagers and JPA, so that you're not doing this using the java.sql.Connection interface directly. Another nitpick though, in Java, field names should not start with underscore so _em should be em.