As Jerry explained, all math operations treat numbers as floating point... even numbers stored as integers. This was my first attempt:

You might think that you could replace the goto 70 with next, but it doesn't quite work. Once the loop is complete, it will go to the next line, and call the next on that line, and you'll get a "next without for" error. Technically it still does what it's supposed to do, but it doesn't exit cleanly.

You could do something like this as a compromise, but it's hackish:

Edward had a good idea: keep separate counters for fizz and buzz instead of doing division. Here's a variation on his approach that sacrifices speed for readability. It doesn't use goto and is about as readable as the original code in the question. It's faster than my examples above, but slower than Edward's solution (since it doesn't skip other conditions after passing one, and doesn't have a combined "fizzbuzz" case).

Incidentally, the biggest performance bottleneck seems to be printing carriage returns and moving everything up the screen. If you try the original code in the question without printing any carriage returns, it will run about three times faster.

Assuming the screen has 40 columns by 25 rows, it's just big enough to fit the fizzbuzz output neatly into columns without scrolling. This version does just that, shaving off about a second from the previous version.

Here's what the output from the final version looks like: 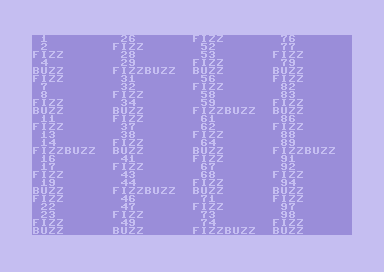 Why use division at all? It's faster if you keep counters instead. This program keeps two counters, H for counting by 3 and V for counting by 5. This runs in under 5 seconds in Vice (PET 2001 mode) and also 5 seconds on my actual PET, which I've owned since 1977.

Not the answer you're looking for? Browse other questions tagged performance fizzbuzz basic-lang or ask your own question.