I am new to programming in Python and wrote a simple Blackjack project. I am looking for experienced peers to provide a high level code review about the overall design patterns and proper usages. The code performs as expected and passes all my unit tests so I am mainly looking for feedback on how to make the code more clean, modular, and conforming to some of the most common best practices. I am especially nervous about all the variables I am passing and the use (or misuse) of global variables.

P.S. On a side note, for the blackjack players out there I did not implement the "double down" feature yet.

You should follow the style guide. I was thinking that NewBlackjackGame was an odd name for a class, but it turns out it's a function; it should therefore be new_blackjack_game. (That being said, I think all of the logic in that function should really be in Game, see below.)

There is no point having a main that just calls one other function. Either rename that function to main, or call the function directly if __name__ == "__main__":.

You only need to hold the values for face cards in the values_lookup, which should be a class attribute (it's the same for all cards/decks). The card's value can just be an integer for non-face cards, then you can dict.get either the face card value or use it directly. For example:

Note the use of @property, which is a Pythonic way to implement the getters and setters used in other languages. In use:

As already pointed out, don't hard-code the name of the Players. If you keep the Dealer separate, you can have as many others as you like:

I think the main issue is having logic in odd places. I would suggest a structure like the following:

Even within the existing classes, your logic is all over the place. Consider this simplified implementation of Hand:

Now there is only one attribute the Hand instance needs - the cards it holds. You don't have to do everything in value (you could have "private" _helper_functions), but you don't need to recalculate a total or hold a separate list of values.

Here is a rough UML diagram showing what I mean: 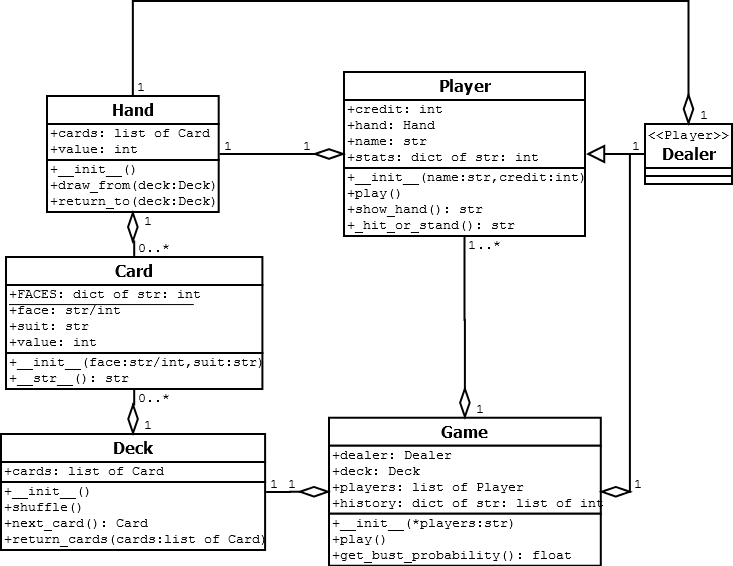 Alright, I myself am a Python beginner too. So I'll see what I can review and leave the rest to someone with more experience!

First thing I notice, is how much easier reading your code would be if the classes were in separate files. It'd be much more modular, and in fact it would help separate different parts of the code.

I'll break this up into section based on class/function.

Overall, I think your code is easy to read, and from what I can see, it follows standards. Up next you'll have to make a GUI and add the actual suite names! :)

I recommend finding any other implementation of blackjack (or a couple of them) and see how they are structured. It appears you've bitten off more than your current skills afford.

Not the answer you're looking for? Browse other questions tagged python beginner design-patterns game playing-cards or ask your own question.