Transform a Binary Search Tree into a Greater Sum Tree

Given a Binary Search Tree (where all nodes on the left child branch are less than the node), and all nodes to the right are greater/equal to the node), transform it into a Greater Sum Tree where each node contains sum of it together with all nodes greater than that node. Example diagram is here:

Here is a test case:

Iterable is a raw type. References to generic type Iterable should be parameterized

This is very easy to fix. It's horrible that you haven't fixed it already. I'm sure that you know what generics is by now so I don't need to explain it to you. Whenever you see this warning, add generics!

Then you can get rid of the (Integer) cast next to itr.next();

My first thought, once I understood the problem your solving was: Why on earth do you have the data as a Binary Search Tree? What does the tree have to do with anything?

If this was a question given to me at an interview, I would ask them this. Why a Binary Search Tree? The operations you're doing is totally unrelated to a tree. You could just as well perform this on a regular int[]. If there is a good reason for why it has to be a Binary Search Tree then please explain it to me.

Here's a simple implementation of how to perform this on a regular int[], without using a Binary Tree:

Note that this is also \$O(n)\$ without using any extra space.

Your tree is in fact not a correct Binary Search Tree. A correct tree could look like this: 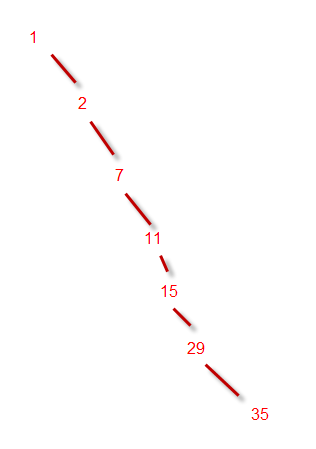 Yes, that's still a tree. It just doesn't have any left nodes (it does have seven nodes left though, I didn't remove any). A child node that is bigger than its parent should be on the right, which makes this tree right. (I love the English language)

As if that was not enough, your int[] expected says:

But your image says:

Given a BST, transform it into greater sum tree where each node contains sum of all nodes greater than that node. Diagram is here.

Just pass it your root node and it will verify your tree recursively. Note that there are two things this method does not verify, that are also a requirement for a Binary Search Tree:

Speaking of int[] I wonder why your constructor takes a List<Integer> instead of an array: int[]. I don't think you gain anything by using a list.

The only thing you gain at the moment by using Integer rather than int is the possibility for this:

As your input never contains null (and I see no reason why it should), I don't get the point of using that non-null check. I modified your code to use int[] instead and removed the non-null checks and all worked well still. It even got rid of some indentation steps and felt like a cleanup overall.

If you would have your Iterator as Iterator<TreeNode> instead of Iterator<Integer> you could use your iterator in your computeSum method as well as in your test method to fetch the results. This would make you have to modify your iterator implementation though (but as your tree is not a real binary search tree, it's quite broken already).

Or you could just ignore the tree structure and use arrays....

Given how many trees I've seen you implement, I really thought your code would be better than this. Your current code doesn't live up to your requirements, or your requirements are messed up. Additionally, the "raw type" mistake is a mistake one just should not make after having written just a few Java classes.

A minor bug: You get an IndexOutOfBoundsException for an empty list in GreaterSumTree.create(List<Integer> items). You don't have a comment stating you need to input a list containing at least something. Consider returning IllegalArgumentException and adding a comment.

You should use IllegalStateException here. IllegalArgumentException is for when the arguments are bad. What's bad here is the internal state of your object. Alternatively, remove the check here and put it in the create function. That way you don't get bad internal states.

Simon has covered much of the code-style aspects of your question. I agree with what he says in terms of how you present and manage your tree. I especially find the missing Generics to be particularly grating.

Apart from the code style issues, I want to review your algorithm. Additionally, there are some items I believe should be said in addition to Simon's comments.

Why have an iterator at all? It appears to me that the only use of the iterator is in the test case... right? This is a lot of extra work to perform for something that just does an in-order traversal for the BST... right? A method on your class like int[] toArray() would be a better solution.

Why have the IntObject 'accumulator', and especially, why is it public? There are better ways to do this.

What the question is looking for

What you have done is repeated loops to access the sum of each node, and from that you accumulate the values in to an IntObject.

What you should be doing is a form of dynamic programming, where you use the tree itself to accumulate the results.... Think of this:

The algorithm becomes a form of reversed depth-first traversal. The implementation will be simple:

In the above process there is a single scan of the tree from largest back to smallest, with the correct accumulation of sums as input/output parameters. The tree is modified in-place as a for of dynamic programming.

As for the rest of your class, messed with a few things to simplify the testing. For a start, I made the node population dynamic, and it is always a BST, except for the fact that, after a re-sum, the tree is the opposite of a BST (with all items in the reverse order).

As a result, this tree is not really a BST because it allows the structure to be invalidated (by design)

Here's the full code I used, note the simplified create, and the toArray methods.

3
Find all nodes in tree, without a sibling

8
Swap nodes in a binary tree
2
Java method to check if a binary tree is a valid BST
1
Merge Two Binary Tree- LeetCode
3
Binary search tree in C++, and display, search and delete functions
1
Leetcode - find if BST is valid or not
11
Recursive search on Node Tree with Linq and Queue
5
Parsing Binary Tree Array in Python