I'm writing an utility audio plugin that specializes in "fullscreen" (the window is freely resizable) visualization of audio, like spectrograms, oscilloscopes and in this instance, a vectorscope. For those who doesn't know, a vectorscope is a coordinate system where each sample in an audiostream maps the coordinates (left is x, while right channel is y). Here's an image of the visualization the program performs: 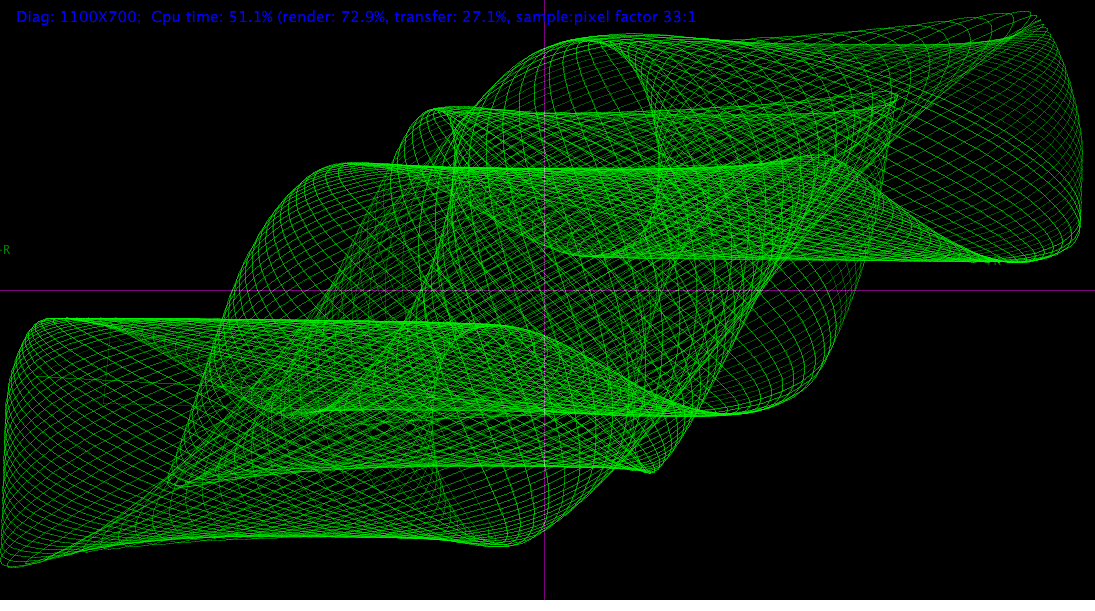 I am however experiencing troublesome performance, dialogs like 1280x1024 can consume 100% of one core depending on circumstances.

I'm currently hoping my rendering code is simply bad and that the performance can be increased, therefore I'm asking for a review of the following code. This is the first time I'm writing graphics code, so bear with me. So far I've steered clear of most bad premature optimizations (I can also measure most didn't do much), and tried to retain nice modularization of the code.

I've included the relevant parts of the code and I hope it's clear what's going on. Here's the painting function:

And here's the bDrawLine function:

To give an overview over what happens and what amount of data we are talking about, here's the chain of events:

Until now I only tested it on OSX, but on Windows the performance is even worse. On OSX, I compile it with Xcode + LLVM, and MSVC++ 12 on Windows. Looking over the Assembly, MSVC does NOT inline the bDrawLine() call (all lambdas are inlined, though). Also MSVC doesn't emit any SIMD instructions (or well it does, but nothing that isn't single-scalar). LLVM inlines everything.

I measure time spent using rdtsc (wrapped inside ClockCounter()), which gives an overview of the time spent both in total and between rendering and writing.

Here's some measurements for a certain sound on a 1100x700 window:

Where the cpu time is calculated as follows:

This is obviously not a precise measurement, but it gives an overview of how much time the painting function uses (on one core). Note that the openGL context runs in a seperate thread. Interestingly, openGL on windows yields much worse performance for transferring.

I currently use JUCE for the graphics, but I quickly realized I wouldn't get much performance out of writing using the API functions on software contexts, so I rewrote the code to render on a software bitmap (waveForm, where waveformGraphics is a context writing to the waveForm image) which at the end of paint() gets written to the graphics context of the window.

I'm really interested in answers/advice on the following questions:

Here are some suggestions:

Use a library
Use a graphics library that will detect your graphics hardware and exploit as much hardware functionality. Some GPUs have the ability to BitBlit, which is to copy rectangular regions in memory to the display without using the CPU. (Taking time away from the CPU).

Not the answer you're looking for? Browse other questions tagged c++ optimization graphics or ask your own question.