I am attempting to break down a Rebol View into a Forth style 'divide and conquer' word set, to optimize readability and organization, and to segregate the business logic from the view layout inner workings.

Is there a way to simplify the following code?

Rebol preserves the case of characters when they match the lexical rules to become a symbolic type in the homoiconic structure being produced:

Yet despite keeping the case in the symbol, it does not use this to distinguish lookups in the (DO "dialect") evaluator:

This is why you will rarely see mixed case symbols in Rebol. That is, unless they are in a block representing a dialect that was specially written to have case-sensitive behavior. Your example here is not quarantined in that way. It's all just running in the default evaluator.

Even if it were quarantined in a dialect: not only is lowercase typing consistent with the language's lookup rules, it's easy on the shift key (as is Rebol's choice of square brackets for the primary block delimiter...) Try to stick with it where possible.

Don't fight the lexer, use structure!

When you write something like field1.Process that's going to become a single symbol, you're setting yourself up for further processing work. Now you have to find the position of the period, separate things out, etc. Luckily Rebol makes that easy:

Still, it's a bit of a shame to not think a little more outside the box. Why not filenames (starting with %) to identify fields, and tags (enclosed in <>) to identify your steps? You don't need to do any extra work:

Depending on your needs, it might be good to free up ordinary words for your dialect keywords. I don't have an immediate intuition for what you are trying to accomplish here. But the point is, the more you can leverage the Rebol typeset the better. And of course there are paths, which are structural:

Remember that COMPOSE is (a) something you could have written yourself, and (b) there to help you as a tool in creating your own dialect. You can even use the /NEXT refinement of DO to chain to the Rebol evaluator to execute one full expression and stop:

Trying it out, you'll get:

So you didn't have to reinvent the wheel to delegate to Rebol's inner logic of figuring out (for instance) that infix addition needs to have its two arguments fulfilled. This can be a way of reducing the need to go around putting brackets on everything, and it can become more free.

Of course, that freedom has some drawbacks. You get less checking. But when the tradeoffs are balanced you can get something that has a lot of the feeling of just writing sentences as one would in English.

Moreover, the PARSE dialect itself can be used to make processing your odd blocks all the easier. Consider an alternative implementation of the above:

Just a few thoughts to consider.

P.S. As with LISP eventually going with the trends and going by Lisp, REBOL has "modernized" by officially changing to Rebol (Although the originating company, currently inactive after the open-sourcing, is still incorporated as REBOL Technologies.) I personally think it looks better to start scripts with Rebol [], but as mentioned above the lookup is case-insensitive... and mixed case is discouraged. So it's up to you. Kind of a special case.

I'm going to simplify your code by removing parts

Remove other stuff (this is when I realize you are trying to compose the different bits together. Hmm..):

Essentially, I'll end up with all the code inside block if I keep at it. And that's ok.

What I think you want, is something similar to this structure: 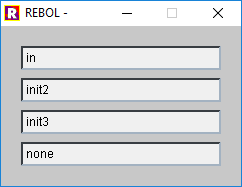 This was a very simple refactoring of your code, and not the only way to do it. Also can be further refactored and improved. Possibly not what you want. The fork offers some advanced tips in this case.

First, in Last Rebol2/view, you have get-face and set-face accessor functions to set or get the value of a face (there is clear-face and reset-face, use help and source to know more on that).

Advantage is that you don't have to know how the face is implemented to set/or get the value of it (think field, but slider, progress, etc.). And the function does also the screen update if needed (ie, set-face will show the face after setting it, except if /no-show refinment is used).

Second thing is that layout function is able to fetch word values that not belong to the VID dialect. You can even use get-word syntax to enforce it. So you can avoid compose parenthesis overhead in simple cases like this :

Not the answer you're looking for? Browse other questions tagged rebol or ask your own question.