Is the following service layer correctly implemented with multiple repositories?

Below is an example of what I'm dealing with. I have data from 2 different repositories so I'm not quite certain when/where I'm supposed to call up any additional information that I need to build my Business Model.

I would like for it to do the following:

What i'm stuck with is I'm not sure if that logic belongs in the Car Model or it should be handled by a Service layer and within the service layer all of this gets combined. Hopefully this isn't too confusing. Below I added what I thought was relevant.

Within the Service Layer:

These are two distinct things: your model and your logic should be implemented in separate classes - the business model defines a Car class, and the business logic consumes it. In other words, I think your Car class is breaking SRP.

The way I see it (could be wrong) is pretty much like this (assuming MVC): 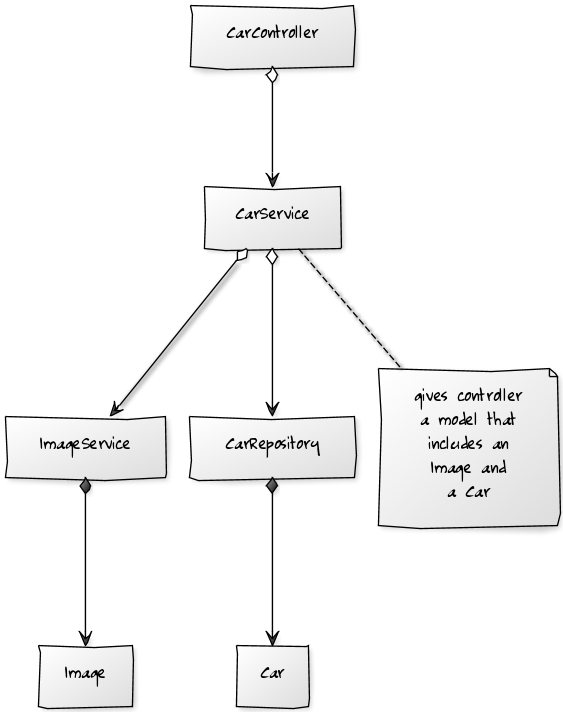 In other words, CarController only needs to know about a CarService, which gives it a model that contains everything the view needs to know - the CarService "puts the pieces together" so that the business logic "layer" can do its part.

I think having a dependency on IFileSystemService in your Car class makes that class be more than just a model.

I don't think it makes much sense to return a whole Car from a method called GetPictureForCar - I'd expect that method to return an Image.

This is even more surprising:

I'd expect GetFileForCar to return either a File class, or a string with the file's name.

A method that's called GetPhysicalFileLocation should be returning a string with the file's name. And to follow C# naming conventions, _Repository should be _repository (assuming it's a private field).

Not the answer you're looking for? Browse other questions tagged c# design-patterns or ask your own question.