I'm a beginner developer, I'm learning online (mostly from the Apple documentation guides), and couple a days ago I started a notes app project. It's the first app I'm building without a guide.

It's very simple so I'd love to post it here and get your feedback on how to improve my code to be more efficient.

The app have two view controllers:

I use Core Data so I created an entity called Note that have one string attribute called content, after that I created the model class from the entity section by doing editor/create NSManagedObject subclass.

So those are my class:

In the Note.m file I didn't added anything:

And I use storyboard to create my interface that looks like this: 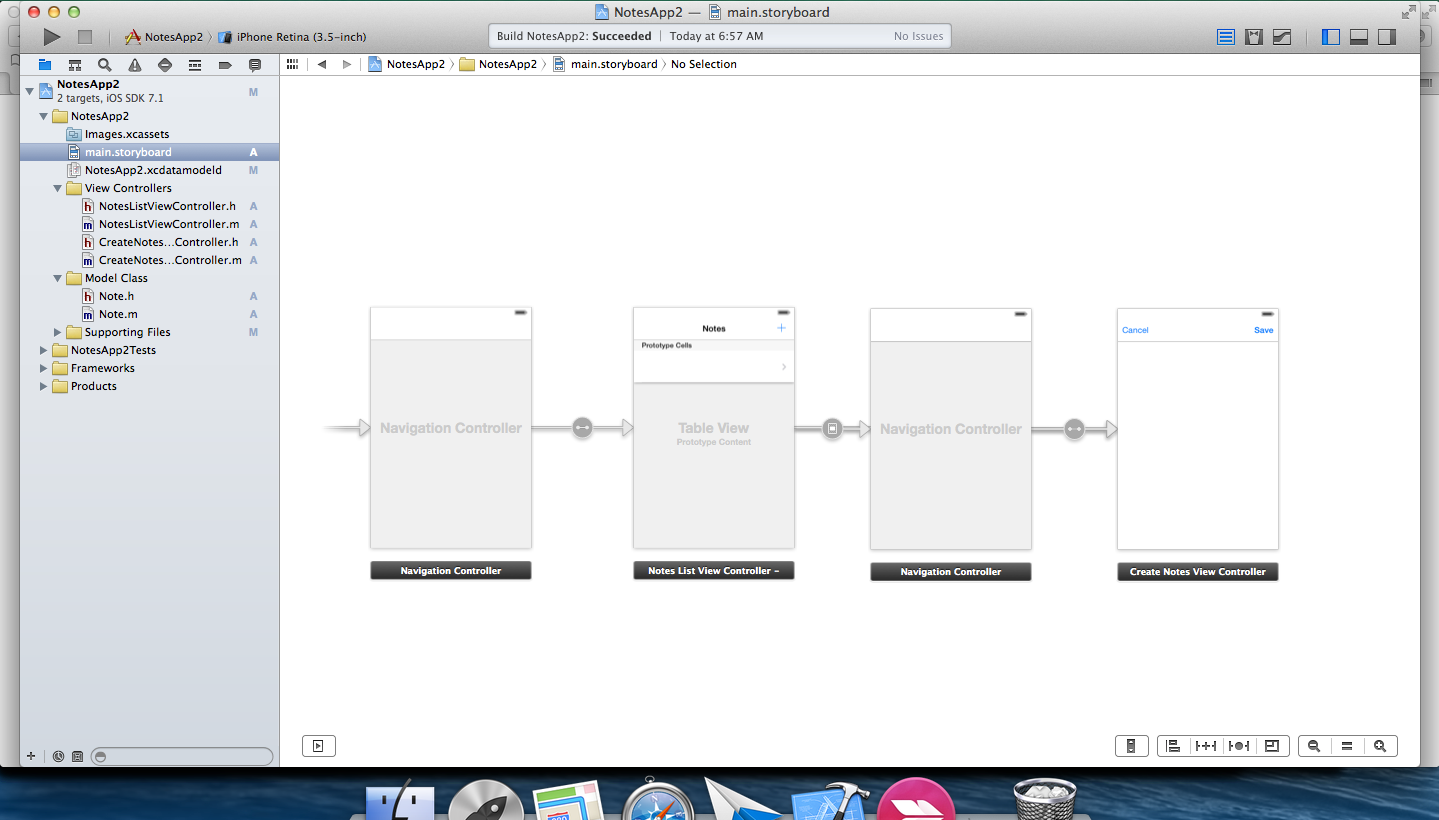 So it's very basic, you can only:

I really enjoy programming in Objective-C and want to get better and better, so if you could be kind enough to give me your feedback on the code that would be awesome.

Look into the NSFetchedResultsController to power your table view. It's something specifically designed to be used with UITableViews that are powered by Core Data.

In essence, it uses a fetch request and returns how many objects are in each section, how many sections there are, what header/footer information they have etc. It has the added benefit that if the underlying managed object context changes (for example when a new object is added, updated or deleted) the fetched results controller is updated automatically. When that happens you can send your table view a reloadData message so it's updated as if by magic. An NSFetchedResultsController adds another level of complexity to Core Data, but since you're already confidently using the framework my guess is you'll like it ;-)

I've got a full working project on GitHub which illustrates both the NSFetchedResultsController and uses a Protocol to dismiss the Detail View. It's similar to what you're building (a CRUD Project - as in Create, Read, Update, Delete):

Then of course there's adding a search feature to your table view... but that's for another time. When you're ready, I have a demo project for that too: https://github.com/versluis/TableSearch2014

Let me know if it helps, and have fun with Objective C!

PS: Kudos for sharing, and for not starting from a template. Well done!

I don't know a whole lot about CoreData or NSManagedObjects, so I can't offer a whole lot of help in this realm, but here are some general style things I noticed (plus a few other things).

You don't need the unwind segue method in your .h file. You can still hook up storyboard segues with it only being in the @implementation, and no other class needs to call this method.

I can't see when the NSManagedContext property, editNote is used outside the second view controller, so this likewise probably doesn't need to be in the .h (but maybe I'm overlooking something).

Moreover, what you do in the following line doesn't make sense. I think you're trying to do a verification check that the delegate object responds to that selector, in which case you want:

I can't understand what or why you're doing what you're doing in CreateNotesViewController's prepareForSegue. We need to do this stuff before we try to segue, given the possibility of a save failure.

The save button should have an IBAction method of its own. It should go through the save process. If you want it to immediately segue after saving, then have it call the segue programmatically. But certainly after a save failure, perhaps the user should get the choice to either segue (and lose all their unsaved stuff, depending on segue type and other stuff) or just segue anyway.

And either way, this sorts of code doesn't belong in prepareForSegue--that method is designed to allow you to set up the destination view controller and pass information to it--you shouldn't be slowing down a segue with something like a save process.

Can and should be simply deleted. This is a subclass. If you're doing nothing with the method beyond invoking the superclass's implementation, then it's nothing but clutter--especially for one of the subclassed objects in all of iOS.

Right now I don't understand the need for the Note class. Why doesn't an NSString work instead of a class with no methods and a single NSString property?

Not the answer you're looking for? Browse other questions tagged beginner objective-c ios or ask your own question.