So, as most of you have likely also noticed, chat components, at least at a basic level, are becoming very common with lots of apps. I found myself tweaking and redesigning the interface from my last project all the time, so I decided to just create an easy to drop in solution. I'd love to get some second opinions on the code, the design, the class interface, or whatever else you've got to say about it!

It receives a dictionary with the message set as a content key. We use the dictionary within the controller so we can pass additional information like userId's, to see who sent the message, or timestamps. This is just a demo.

You'll also have to go into the controller and add some logic to assign who sent the message. Right now it's random just so you can see how it looks and works:

You can put whatever logic you'd want there, likely something similar to: 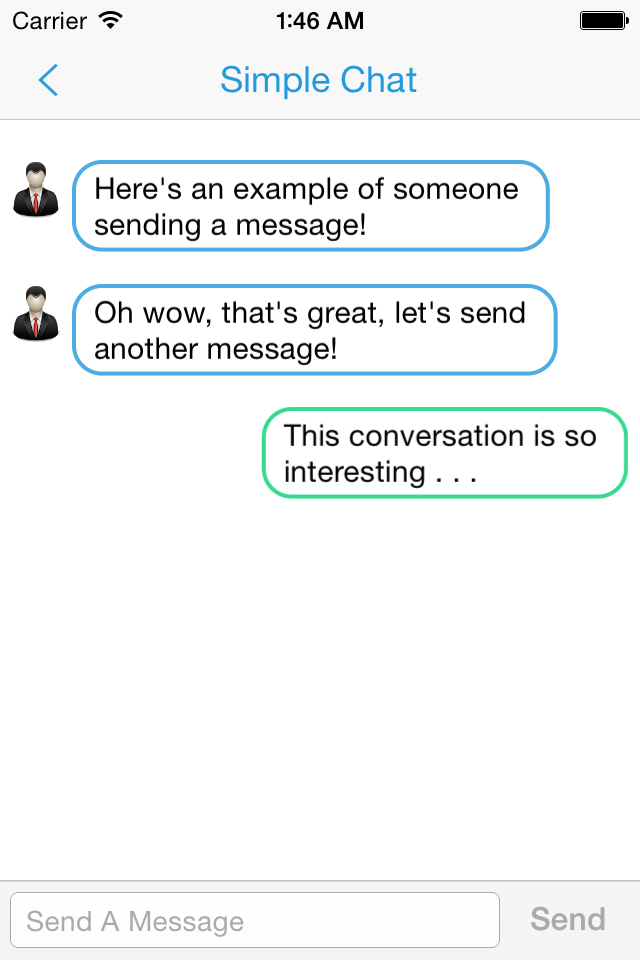 This is perfectly fine syntax, but an Objective-C purists doesn't necessarily like the new method that much. new is simply an NSObject method that looks like this:

And as such, anything that inherits from NSObject will have this method. But the only reason it exists as far as I know is for something like a security blanket for people coming from other languages where object instantiation might look something like this:

They want to hang on to their new keyword--their clue that they're instantiating a new object. And while this is fine for those who choose to use it, a complete class would write its own factory method(s) in addition to the default one inherited from NSObject.

NSArray, NSDictionary, NSNumber, NSDate, etc, etc, etc. Most of the Foundation classes have their own method that does something similar to what the new method does. You would be wise to follow suite with a method that looks something like this:

Now, someone like me who prefers doing things the real Objective-C way can do [ChatController chatController] in place of new.

As someone who might use a library like yours, the existence of such a method tells me that you've paid some attention to your instantiation methods and aren't relying on those inherited from NSObject. This assures me that any instance variables that need to be set before I call any methods (if any at all) are definitely going to be set.

As a note, if you override init, this instance variables will still be set when calling new, because remember, new is simply return [[self alloc] init]; so it calls the init method you wrote.

What would happen if I presented an instance of your ChatController class before I set the delegate, chatTitle, and opponentImg? Hopefully, you've written the class in such a way that nil or an empty string is a perfectly fine title, and that nil for opponentImg causes no problems. But what about the delegate?

Sometimes, objects that can have a delegate function somewhat fine without a delegate. For example, a tableview has a delegate property, but it also has a datasource property. The datasource fills the table with information. The delegate handles user interaction with the table. But if you don't need to respond to any of the user interactions and only need the table to display information to a user, your table will function just fine without a delegate. (And a table with static information doesn't need a datasource--the static cells can be completely created in IB).

Is this the case with your ChatController? Can it function just fine without a delegate?

If these three properties are all truly optional and the class works just fine if they're all set to nil, then you're fine as you are and the following information would be something optional to consider, purely a nicety (one which I always include in my classes). However, if these properties are not optional and it's not okay to set them to nil, then you really need to implement some factory methods.

Assuming only the delegate is necessary, first we'll create a new init method:

This method takes the delegate as an argument and sets this property upon while it's doing its initializing. But as is, we have to write:

So let's wrap it in a factory method:

Now, it's as simple as this:

Following this same pattern, you should include a factory method that sets all the properties that a user is likely to want to set before doing anything with the object. For example:

First and foremost, it's a little strange to see a UIViewController subclass that has a delegate. It's not entirely unheard of however, and can be justified. But let's talk about you situation and your delegate.

First of all, this is a bad method name. It's confusing and unclear as to when and why this message would be called. If the ChatControllerDelegate is calling this method on its delegate when the user sends an outbound message, a better method name might be:

However, if the ChatControllerDelegate is calling this method on its delegate when a new inbound message is received, a better method name would look more like this:

When the ChatController object calls this method on its delegate, it's going to send self for the first argument, and the message for the second argument. The reason for doing this is similar to the reason why the Foundation classes do this. A UIViewController can delegate multiple UITableView objects. Because they send self as part of the arguments in the method call, the UIViewController can distinguish which table is calling the method and respond appropriately.

Your addNewMessage: method takes an NSDictionary argument because, as you say, you want the ability to be able to add other information such as user ID, etc. This is good forward thinking.

However unfortunately, your ChatController class simply has an opponentImage property, which sets the image for messages sent by "opponent".

I would recommend adding a handful of predefined constant NSString keys that users can use in their dictionary when adding messages to affect the look in a number of ways.

You might consider some properties that the end user can easily set that will effect the overlook look and use of the chat.

Some properties to consider:

Finally, something you might consider adding would be a method to get a log of all the chat messages in the controller. The method would return an NSArray of the NSDictionary objects so the user has all the information about every message in the controller.

You might optionally also include a method for getting all messages that have timestamps occurring between two NSDate objects.

These would allow the user to easily save the chat log to some sort of file format for long term storage.