I am making this program that is going to calculate distance from randomly generated dots (with x and y coordinates) to 5 bigger ones and then its going to put each smaller dot into the group with bigger one that is nearest to it. So, i am making this with classes and every dot is made as an object. I made 2 arrays of objects. One holds the bigger dots and other one smaller dots. I also made 2 separate classes. I am not sure if this should be done with nested classes/subclasses or my concept is ok. 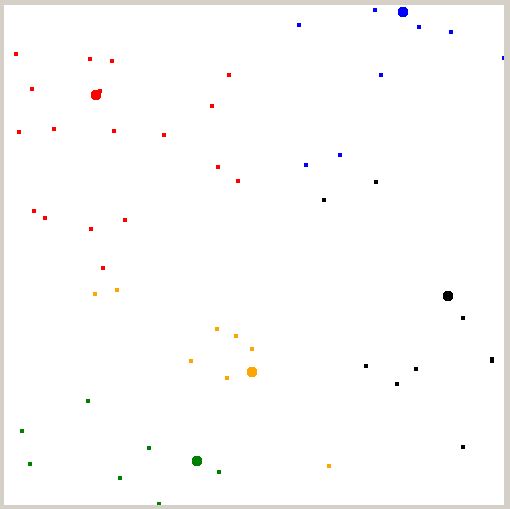 Class names in general should be singular - Group, Dot.

If you have a constructor which sets coordinates x and y, call the parameters it gets x and y, not a and b... Also, I would refrain from single letter names, although, in this case, x and y seem ok, since they represent coordinates.

You declared members, and implemented getters to them which is fine (although you used the wrong idiom for C#), but you failed to declare the members as private. This means that these members are internal, and can be accessed outside the class:

Edit - this is, of course, wrong (thanks @Matthew) - I got confused with java), the default access modifier for members in C# is private. I still stand by my recommendation to be explicit with private, to be more readable, and compliant with coding conventions.

For some reason Dot has a property called Group which is... an int?? What did you intend this property to do? If you want it to hold a Group, its type should be Group:

I also guess the brush is also an instance of a class (and not an int), and should be declared as such:

Also, what is the role of x and y for Group? I should have guessed that Group will hold some Dots instead...

What are nested classes? What are subclasses?

You ask whether you should use subclasses of nested classes, but your example shows neither.

A subclass is a class which inherits from another class, and then looks and behaves just like it, plus some other functionality, which makes it a special case of its parent:

A nested class is a class which is declared inside another class, it does not inherit anything from it, though it might have special permissions to access its enclosing class:

As you can see, the relation between Group and Dot doesn't seem to fall under any of these categories, and they should be written as separate classes, each having a property pointing to the other ('Dot has a Group' and 'Group has Dots').

I am not going to repeat the points of Uri Agassi.

Both of your classes have a considerable amount of common code and both represent some shape that has to be drawn. Therefore I suggest extracting the common code to an abstract base class named Shape. A Shape has a center and a brush:

As you can see, I am using a Point structure for the center. The Graphics object supports these points and they can be assigned with just one statement Point p = dot.Center;. The System.Drawing.Point structure has also a set of useful methods and operator overloads.

The Group class inherits Shape and passes on the center and the brush to the base constructor:

Group adds no more members, as Shape has all it needs.

The Dot class inherits Shape as well and adds a Group property. Since we probably don't know to which group a dot belongs when it is created, we initialize the brush as black.

When we assign a group to the dot, we automatically take over the group's brush, since a dot has always the same color as the group it belongs to.

I also used properties instead of accessor methods.

Possible extensions: You could add a radius to the Shape class. This would allow you to use the same method for drawing the groups as well as the dots. Add an abstract Radius property to Shape:

and implement it in Group:

Now you can write the drawing method which works for both shapes like this:

for OOP practice - its best to go from small to big.

And you are correct - regardless of syntax (ie programming language) this concept of nested/inheritance (aka subclass) is sometimes harder to pick from.

the bottom line of OOP though is that you try and reduce redundancy.

Possible solution would be make Dot a class, make Group uses an array of Dot with Brush (because the Group is always 5 dots of x,y)

Not the answer you're looking for? Browse other questions tagged c# object-oriented classes or ask your own question.

4
Implementing widgets within a main window