This finds its origin in the following reflection. In their book from 1995, the so-called gang of four (GoF) described the state pattern. What they were actually telling us in their description, is that any object oriented language that implements dynamic polymorphism has an embedded finite state machine (FSM) engine. C++ is such a language, and the example code in the book is written in that language. Why then, do we have to use large frameworks, libraries and tools in order to implement state machines in C++?

I asked myself that question recently for a C++ project where I have the freedom to choose my tools. Since I have long been a supporter of the KISS-principle (keep it simple stupid), my first intention was to just apply the pattern as described in the book.

Basically, the state pattern tells us that the FSM should have a pointer member to a virtual state class, always pointing to a specialization of that class, that represents the current concrete state. It then delegates the events it receives to the state pointer, like this (quoting the book):

where TCPConnection is the FSM and ActiveOpen() is an event.

Not so neat. I started to wonder if templates couldn't help me to parametrize the target state in ChangeState(). If the state had both a reference to the FSM and the ability to transform itself as a result of a transition, surely I would get a much simpler and cleaner syntax.

Let's assume that I have the following silly state machine to implement (made with ArgoUML, if anybody is curious). 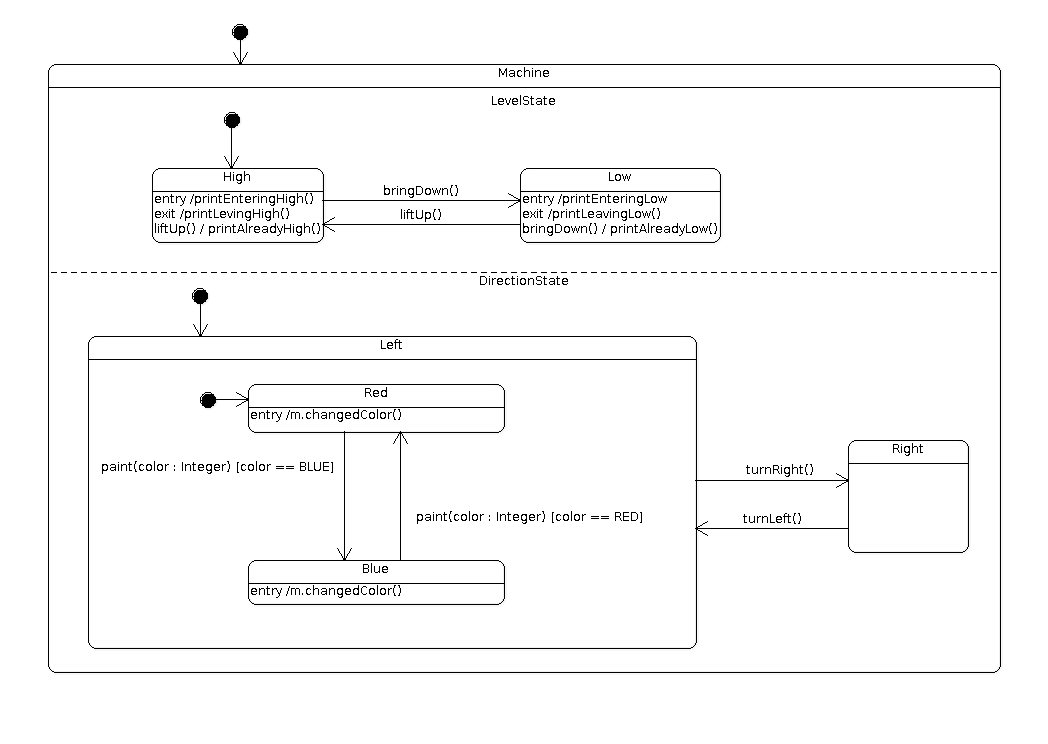 It is silly, but it contains the features that, in my experience, are necessary in a state machine implementation:

The UML has a lot more than that, but I am not convinced that the rest is strictly necessary in the FSM implementation. After all, we have the rest of the programming language for that...

What I want is all you get

The kind of event handler I want is this:

where Machine is my FSM, Red the state, paint() the event, color an event parameter and Blue the target state for the transition. But you knew all that, it's in the diagram.

As the code below testifies (public domain, use it as you wish, but don't blame me - compiles with g++ 4.6, C++11 switched on), I have managed to implement the state machine depicted above, in such a simple syntax, with the help of a 40-line state template that I have called GenericState (genericstate.h, the rest is the state machine code):

I don't have much to say.

Your implementation is similar to the GoF's (posted here) except that your machine instance is passed by reference to the states' constructors, instead of being passed-in to the states' state-transition methods.

I wonder whether the following would allow a similarly-clean syntax but allow states to be flyweights:

This has some of the same advantages as your scheme (clean state methods) but also allows singleton/flyweight states.

Heap operations can be relatively expensive; and I imagine that some state machines (for example, the tokenizer of a parser) might want to be as fast as possible.

Not the answer you're looking for? Browse other questions tagged c++ c++11 state state-machine or ask your own question.