Some recent discussions on this site involved the Fizz-Buzz game - I have never actually implemented this, but for the record this is what I put together:

When people implement fizzbuzz, they tend to run a loop going from 1 to 100 and outputting the results to some console. According to Wikipedia, that's not how the game plays:

Players generally sit in a circle. The player designated to go first says the number "1", and each player thenceforth counts one number in turn. However, any number divisible by three is replaced by the word fizz and any divisible by five by the word buzz. Numbers divisible by both become fizz buzz. A player who hesitates or makes a mistake is eliminated from the game.

So I'm thinking of going that way - and since I've never actually coded anything remotely resembling AI since I tweaked some Duke Nukem 3D configuration files in 1997, I'd like to get some feedback and refactoring thoughts about this:

This brain works, ..it's just a little too hesitant: 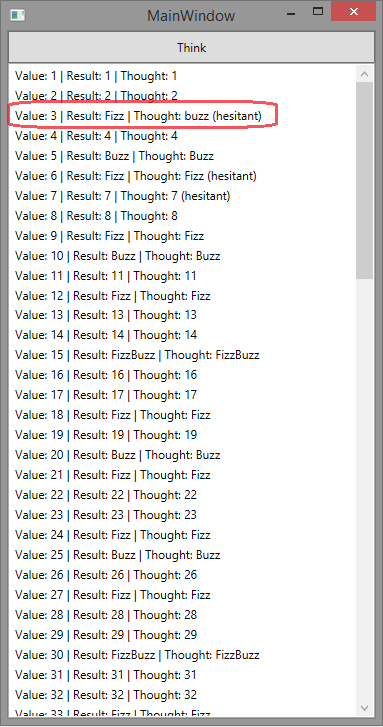 Still, it's not too dumb: 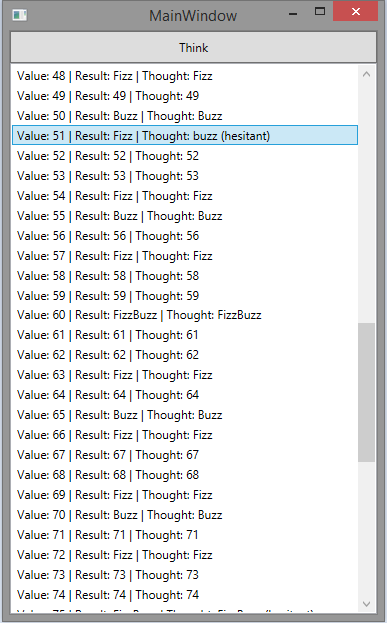 I'm sure I could tweak the percentages to come up to something decently smart enough to implement a game with 5-6 of those "brains" playing against a human player, who would win if all the brains fried before his.

I'd first create an interface that your FizzBuzzConverter class can implement:

Then the PseudoBrain can have any implementation of the interface injected into it:

This will allow for easier unit testing via mocking or writing and using new Converters.

Lastly, I have a bit of a squicky feeling when I see random number generators created over and over (as Think() will be called repeatedly). So I put that at the class level:

Not the answer you're looking for? Browse other questions tagged c# fizzbuzz ai or ask your own question.