I am writing a dice roller winforms application using C# 2012 VS. Dice roller is set up for playing Shadowrun tabletop. I feel that there might be too much code going into the GUI, but I am unsure how it should be formatted. I am also very open to general advice. This is my first program I am trying to construct on my own after graduating. I have never attempted a GUI application before.

As an addendum to @retailcoder epic answer I offer...

Lots of your existing code will simply melt away when we take a more object oriented approach. The key is making classes for the basic things in dice game world and have each class responsible for doing what it is supposed to.

A single Dice, that is.

We have the concept of "rolling dice." OK then let's make some Dice.

Just a sketch. This could be a craps, yahtzee, lier's dice...

We still need a class to put it all together. But first IOC...

Inversion of Control allows for dependency injection. By inverting the composition of objects we can inject different objects. It limits where we make changes for these different things. This is very powerful when doing unit testing.

This comment about rolling N dice is addressed here.

Don't commit an empty event handler without a comment like // todo: implement "New" toolbar button click - a comment like this would explain why you have such a handler, and why it's empty. Otherwise you're registering an event without doing anything about it and that's just plain YAGNI.

Your private fields are not following established naming conventions. They should be something like this - also if you're going to be referring to the String class with the C# string alias, you should also be referring to Int32 with the C# int alias, for consistency's sake:

Now this one is debatable, but I find explicitly saying what the type of everything is, is an annoyance - use var for implicit typing:

That way if you decide to change that Int32 for an Int16 or something else, you only have one place to change it. Again, using var whenever possible is only a matter of personal preference... but I prefer that :)

Your class names don't match the file names - RollDice.cs contains class Roll which is sure to cause some trouble at one point or another, not to mention Roll (a verb) is a very bad name to use for a class (a noun).

...and only put 1 class per file, I had to scroll all the way down to find the RollDice class, which is also a non-obvious name, especially when I see another class called DiceRoller where I would expect a Roll() or RollDice() method; I suggest you refactor/rename DiceRoller to DiceRollerApp, since it's your application entry point and that would be clearer that way.

That's all I have time to cover for now, I'll edit with more when I have a minute, I think I'll even download your project tonight and see it in action ;)

Ok so I managed to open up your solution in VS2012 (read: not 2010 as mentioned in both this question and the GitHub repo).

The first, very first thing that strikes me, is this line of code:

Why does it strike me? Because it's a lie - DiceRollerUserControl isn't a user control, it's a form:

So the fist thing I'm doing - before I even run the app, is rename this class to DiceRollerMainForm. Second thing I'm doing, build the app. And it's failing with some manifest error - I go to the project properties / "Signing" tab and uncheck the "Sign the ClickOnce manifests" box, and then it builds. And... another thing strikes me.

You're using a SplitContainer, and your form is resizable. That's good. Now I realize this isn't WPF, but in terms of layout, I'm sure you could do better: 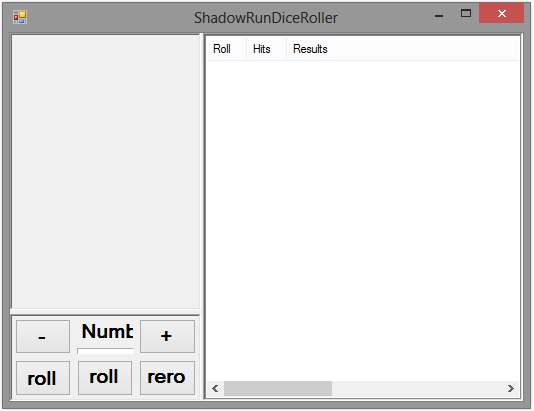 The DiceRollerMainForm (the renamed DiceRollerUserControl) is tightly coupled with Dice and Roll classes, because of these lines:

But I'll leave that aside for now. Moving on to the event handlers:

This is setting the number of dice to be rolled next time we roll the dice - I think setting it to 1 whenever there's a problem with parsing the int value, is a bad decision. Instead, you should give the user some visual cue about the value being invalid, and while the value is invalid the commands that rely on it should be disabled.

This is the code behind the + and - buttons, respectively for adding and removing a dice. Again, you have a piece of logic here that's burried in an event handler, and using magic numbers: this is begging for a minimum and a maximum dice count constant or configuration setting.

So I register it. And now there's another, more subtle bug: again I put a breakpoint on all 3 handlers, and when I click the + button, the handler for that button runs and sets the text in the textbox from 1 to 2, which is intended. But since the textbox text has just changed, the TextChanged event fires and the handler for that event runs, hitting a second breakpoint and then the procedure just re-assigns _currentNumDice to the value it was just assigned with.

So we Roll the dice.

First thing that hits me here, is why the heck was _currentRoll initialised with = new Roll() in the first place, if we're going to replace it with the return value from _diceRoll.RollTheDice()? I think _currentRoll should be null until the dice are actually rolled. Actually, I don't think it should even be an instance variable / private field: it's only used for adding SubItems to the ListViewItem that populates the resultView. Variables should be as short-lived as possible, the meaning of _currentRoll has no significance whatsoever after the dice have rolled and the results were added to the resultView, and _rollNumber also only has a significant value within that scope, so a first round of refactor could start with this:

Now numHits, rawRoll, isGlitch and isCritGlitch are absolutely cryptic to me; I have to go to definition of the Roll class in the Dice.cs file (grrr...) and be lucky enough that you have included these comments:

...And now we have a problem: how does rollResults[4] instinctively means a 5 was rolled"? Let's look at FinalRollResults:

First off, internal is of no use here, since you have only 1 assembly. Did you mean private? Probably not, since the app doesn't build in that case. I'm making it public. Another thing, FinalRollResults is a very, very bad name for a method - it's a noun, which would be suitable for a class name. But this is a method (verb) and it returns void so the only way to find out what it does, is to read it.

I'll stop here, I think you have enough food for thought as it is!

your Do..While threw me for a loop. I saw the While statement and not the Do statement preceding it and wondered where the code was.

you already set the rand variable to something less than 1 before the loop, so you should just write it

it is more readable and less code to write.

my Instructors didn't like the Do-While loops, they liked it better when we used the While Loops. it is harder to get into an infinite loop with a while loop as opposed to a do-while

Difference between Do and While

The 2 loops are different.

Not the answer you're looking for? Browse other questions tagged c# object-oriented random gui dice or ask your own question.