Basic OpenGL application that renders multiple cubes on a textured plane, setup for a 3D game

I'm learning OpenGL and started work on a small 3D game (like Sokoban) for practice. I want to know if the design of my OpenGL code reflects a good understanding of the technology. For example, one problem I ran into was how to handle drawing multiple objects with different shaders, which I fixed thus far by using a separate VAO for each type of object. I'm not sure if that's an optimal/scalable solution, hence why I'm here.

Here's a screenshot of what the final application looks like (also includes controls to spherically orbit the camera around the scene): 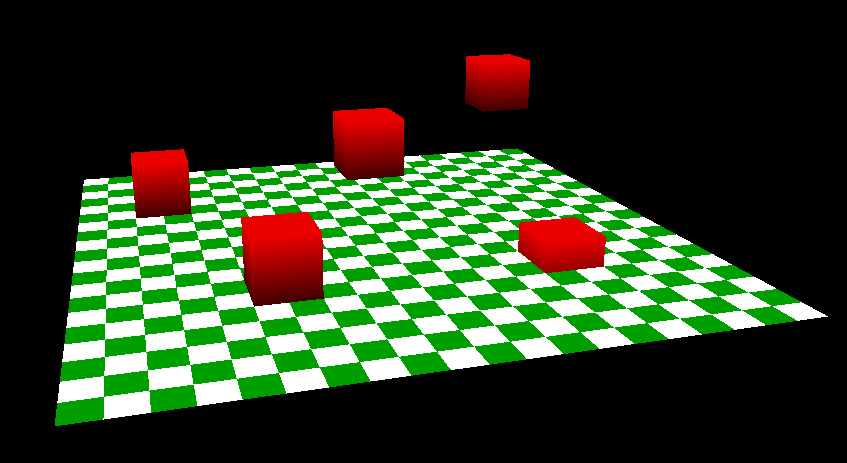 Currently, my code is organized into 3 parts: main.cpp, game.cpp, and world.cpp. main.cpp only contains the main function, which just creates the Game singleton and calls its core procedures. game.cpp contains the code for initializing the app (using GLFW), loading shaders, and running the game loop, while world.cpp does all of the actual work. The total LOC is about 500, but I'll do my best to abbreviate that. Without further ado, the code:

That's it for main.cpp, not much to say here. Game is implemented as a Meyer's singleton, which I mention because I would additionally like guidance/opinion about its use here:

The singleton implementation starts at the top and also includes the private constructor and destructor at the bottom. I use it because generally when I make games in C++ I make a couple of system-level classes (like Game and World) that contain data used throughout the program. I've been advised to perhaps just use a namespace and have thought about static classes, but this solution seems nice to me. Thoughts?

Anyway, the implementation of the header is mostly unimportant, so I'll omit the .cpp file, but will mention the shaderFileToId member. I use this map to access shader program IDs by the root name of the shader files. The main problem I find with this method is that the code (as you'll see below) gets pretty long-winded combined with the singleton calls. Any suggestions there would also be appreciated. Next is the world header:

The main part of world.hpp is the World struct, which contains the VAO containers for a Floor object and all of the Cube objects that will be placed. So I'm using one VAO for each type of object I'm drawing, and that's because they use different shaders. Before I used multiple cubes, I did have just one VAO, but to make it work I needed to make the layout locations for all attributes between the two shaders unique, otherwise one would overwrite the other. But because both needed a layout for the positions of each vertex, I would have rather used the same location for the position attribute for each shader. That's mostly what motivated me to use separate VAOs, but I'm still not sure of what the proper way to handle the multiple shader/VAO situation is.

The rest of the class isn't super relevant, some variables to control the world transform and camera, containers for the objects, and some basic procedures. However, world.hpp also contains the Floor and Cube structs:

The important parts here are the GL data they contain: they each hold a reference to the VAO that are used to create their renders, as well as the required Buffer Objects and buffer data. One thing to note is that the VAOs aren't created within the struct, but is created by World and then passed to their Initialize methods as arguments. It will become more clear how they are used, but I would also like to know if storing the GL objects within the structures is a good way of storing the data.

Okay, lastly, and the most important part, the implementation of how the objects are created and rendered:

The Initialize methods do basically the same thing, although Floor has the added texture details, where they bind the VAO passed from World, fill in the VAO using the buffer data (omitted), and then I get the uniform locations of the shaders for later purposes. I honestly don't know if/how there could be a better way of doing this procedure, although you can see here the verbose nature of retrieving the shader program (might I just accept the wordiness?).

That's the gist of the whole program. To summarize, here are some of the concerns I have with the code:

c++ game opengl
Share
Improve this question
asked May 25 at 9:04

You don't need a copy of the vertex and index data in every cube object. Only one copy is necessary. So make the cornerPositions, indexBuffer and cornerBuffer static.

this turns the Floor and Cube into:

The static variables can be allocated to another struct if you really hate static members.

This also means that creating the VBO and uploading data to it only needs to happens once, not once per cube. Hence why I added the Initialize_static.

So the main() function be simply:

The constructor does the initialization, and the destructor does cleanup when the game object is destroyed at the end of the function.

Later you might want to decide on a generic model format and load it from file, so you'd replace the two variables above with a second map:

In any case, our World just needs to store transforms for each instance we want to render:

Not the answer you're looking for? Browse other questions tagged c++ game opengl or ask your own question.