I’m currently taking an online embedded programming course. This was our 4th programming assignment. The device is Microchip(Atmel) XMEGA-A3BU Xplained Development Kit, Mfr. Part Number: ATXMEGAA3BU-XPLD, the short name is Atxmega256A3BU. The device has an 8 bit data bus and a 16 bit address bus. I'm doing the development on Windows 10 in Microchip Studio 7 (a very poor clone of Visual Studio). I'm building the code without optimization. The optimizer has a habit of optimizing out my timing loops. 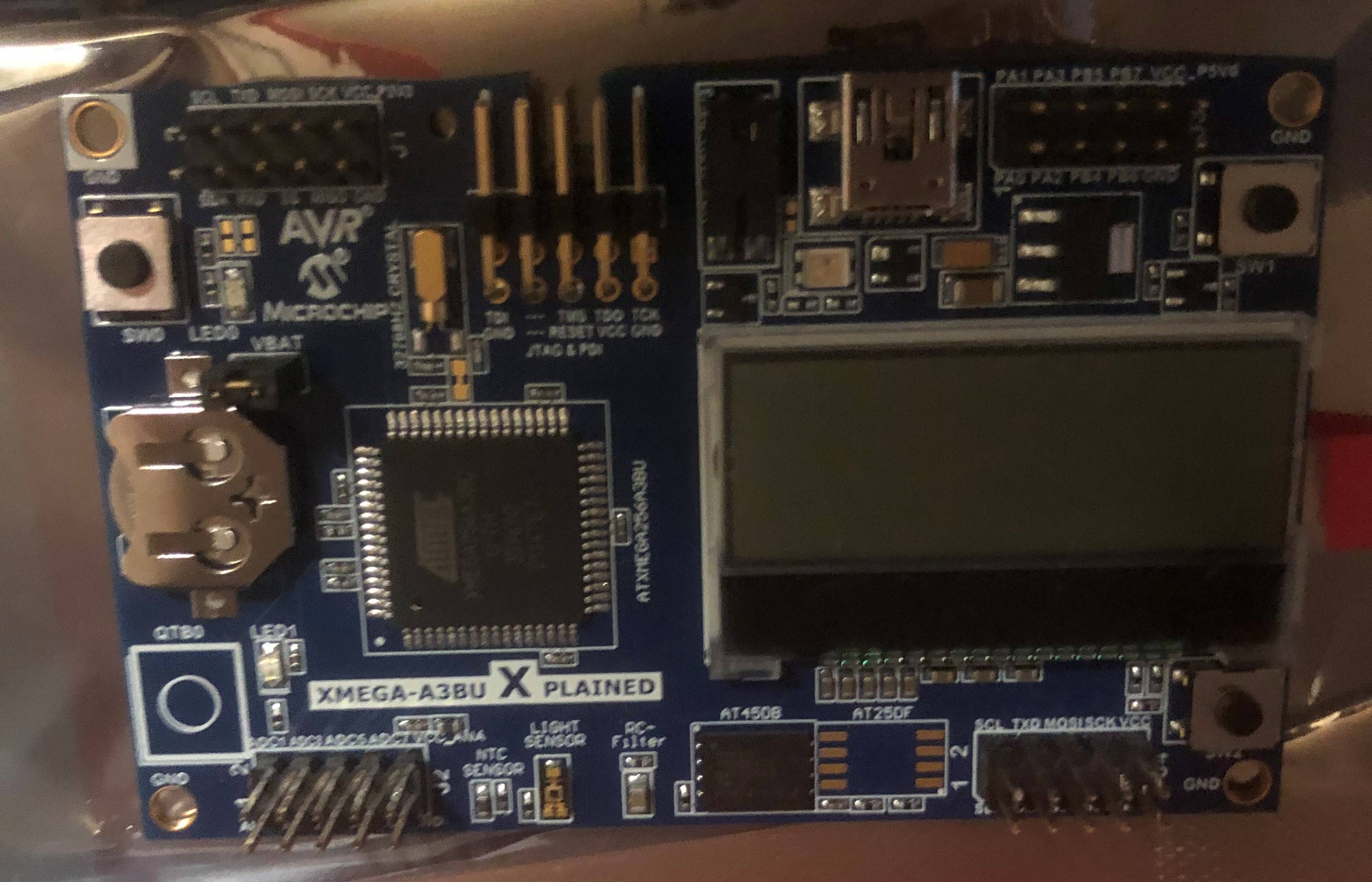 The assignment is to alternate between 2 LEDs and if one of the buttons is pushed change the behavior so that the LED associated with that button is pushed is lit. Current LED 0 is associated with button SW1 and LED 1 is associated with button SW2. We are to use the TCC0 timer to alternate between the 2 LEDs. My question in addition to asking for a general review is the code for reading from and writing to a hardware address most often similar to the code in ReadReg() and WriteReg() in the code below? I'm asking about the pointer and not the volatile keyword. I've known the volatile keyword a long time.

Just FYI, the instructor really likes comments. If you are wondering about the change history, I am not using GIT for this class.

This assignment has been handed in.

c homework embedded
Share
Improve this question
edited May 17 at 15:38

The optimizer has a habit of optimizing out my timing loops.

This is (a) a non-surprise, and (b) somewhat of a red flag when it comes to coding practice. If you're writing timing loops that attempt to take advantage of instruction durations to time events, expect difficulty unless you drop down to assembly (bypassing the compiler and optimiser), or do the saner thing and use hardware timers when possible.

Regarding ReadReg and WriteReg. Don't treat addresses as uint16_t. You'll need to read your compiler manual to rule out weird behaviour like near/far modifiers etc., but if humanly possible, those RegAddress should be actual * pointers. You cast to a volatile unsigned char *: check if that's the size you're looking for, and if so, just use that as your argument type.

More on the above: as is quite typical with microcontrollers, they have an address space that's more complicated in some ways to use than modern desktop architectures. Read chapter 3 AVR CPU, particularly

All I/O status and control registers reside in the lowest 4KB addresses of the data memory. This is referred to as the I/O memory space. The lowest 64 addresses can be accessed directly, or as the data space locations from 0x00 to 0x3F. The rest is the extended I/O memory space, ranging from 0x0040 to 0x0FFF. I/O registers here must be accessed as data space locations using load (LD/LDS/LDD) and store (ST/STS/STD) instructions.

[...] All memory spaces are linear and require no memory bank switching.

Not all addresses are created equal. Addresses in the lower 64B use a different access mechanism from those above. Read this section in GCC for evidence that gcc treats AVR specially. Generically speaking, gcc may (though doesn't appear to) have chosen to add a near prefix for pointers to this lower segment, and far for pointers to this upper segment - this is done in other compilers for other architectures. Since I don't think it does, I encourage you to

I don't understand the comment // disable interrupts. Because.. you don't do that? Or is this some magic the compiler does for you to wrap volatile dereferences? You should specify.

Set PORTF direction to input seems like something that should be done once on initialisation and then left alone.

is a pretty surprising way of writing

The delay function will be terminated if the button status has changed.

Polling loops are a method of last resort. Hopefully your dev board has wired the button to a pin supporting hardware interrupt. Based on the documentation, your button pins are PE5, PF1 and PF2. In your microcontroller manual chapter 13.6, it shows

As a matter of some urgency, you need to know what your clock rate is (ask your prof?). Then, there will be no manual iterations, and a single setting of the timer with a single expiry.

You claim that the current delay is somewhere between 250-500 ms for your timer value of 250. This suggests a system clock between

Visual inspection only reveals an RTC-style 32 kHz crystal and no other hardware oscillator. Between this and the fact that the 2 MHz internal oscillator is the default clock source used on startup, chances are that your base oscillator is 2 MHz, depicted in the bottom right: 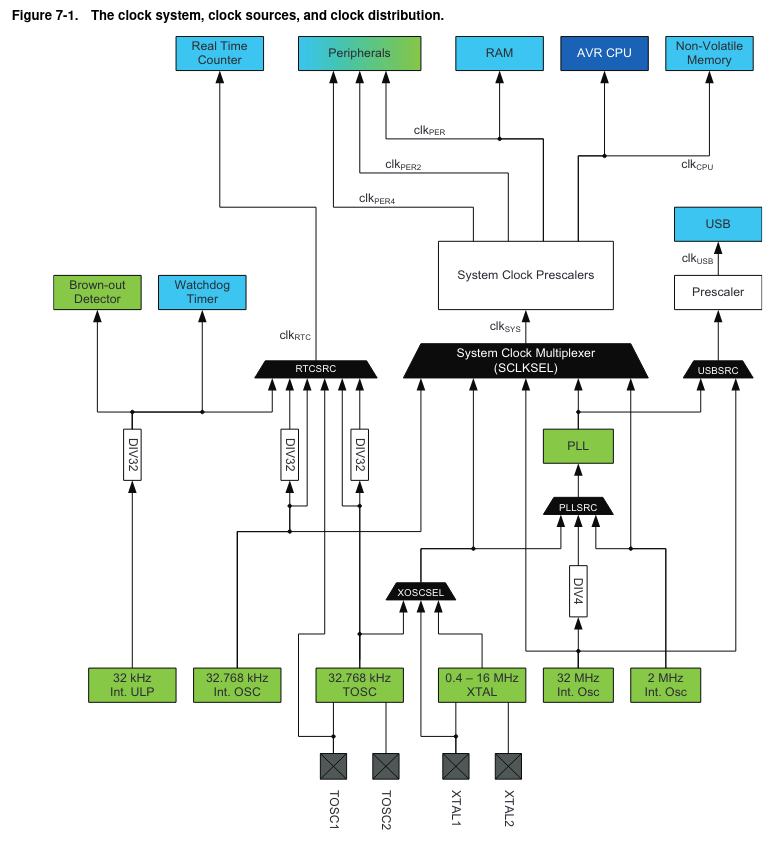 It's less likely that XOSCSEL and PLLSRC are set such that your system clock is some multiple of the 32,768 Hz crystal. A PLL factor of 15-31 would be consistent with the delay you're seeing, but again, if you haven't chosen this explicitly, you're just on 2 MHz.

TC0 in figure 14-1 only shows an input of clkPER, so it's unlikely that the system prescaler has any effect, which in turn increases the likelihood that you're on 2 MHz or below. You should attempt to nail this down before your next assignment.

For an expiry of one second, you cannot use your timer's lower half only. You need to use all 16 bits. If you add a macro that - rather than pointing to a uint8_t, points to a uint16_t - and you get your endianness right, a simple dereference-and-assign should compile to the right thing.

Assuming for now that your system clock of 2 MHz is accurate, with a 16-bit-wide counter and your available prescaler settings, your prescaler feasibility region looks like: 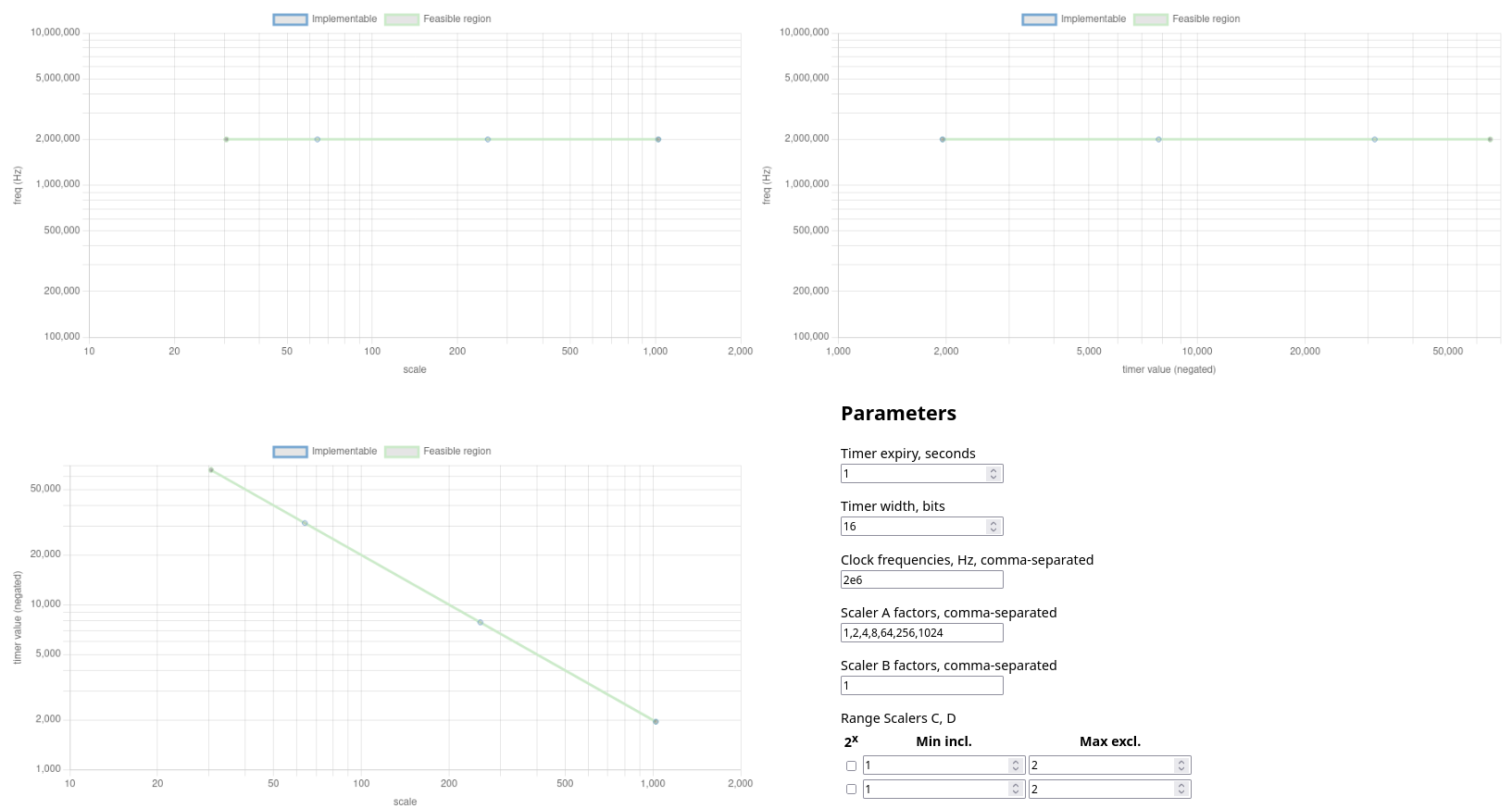 The timer should be "set-and-forget". Refer to chapter 14.8.1 Waveform Generation - the output should be automatic, and you should only enact a port override if you get a button interrupt.

Then put the CPU into an idle or sleep state with no loops required. By chapter 8.2:

When the device enters sleep mode, program execution is stopped and interrupts or a reset is used to wake the device again.

Portable Register Addressing to allow the code using this file to port to other devices.

I seriously doubt that. Other devices may have (and will have) completely different mapping. What's worse, the mapping of external hardware (such as LEDs and buttons) to particular pins is specific to the board, but not to the device.

This file may increase readability, but it doesn't address portability at all. You may consider to add another abstraction layer as, say, readButtonStatus(...), setLED(...), etc.

Buttons are a higher priority

The code does not support this claim. service_leds calls DelayUsingTCC0, which runs the delay loop to completion, so until the delay completes buttons will not be served. In an infinite loop the order of calls doesn't matter.

It is very unclear how the application should behave if both buttons are pressed. If I understand this code correctly, the implementation prefers the state of PIN1. Perhaps it is an expected behaviour, perhaps not. In any case it shall be documented.

Use a standard library

It looks like you have written a lot of code to deal with AVR registers. Maybe it was required that you wrote everything from scratch, but it would be much better if you could use a standard library for interfacing with AVR microcontrollers. There's Arduino of course, but I recommend using AVR Libc, which seems to be included with Atmel Studio 7. It exposes all the registers of your device, correctly made volatile, such that you can write:

GCC for AVR comes with stdbool.h, I don't see why you are defining TRUE and FALSE manually? There is no law against using modern programming standards when it comes to embedded devices, you don't have to resort to K&R C.

Not the answer you're looking for? Browse other questions tagged c homework embedded or ask your own question.