Is there a way to make my Rock, Paper, Scissors game more concise?

I am learning JavaScript and I just wrote a Rock, Paper, Scissors game that will first prompt the two players for their choices and validate them. In the event of a tie, each player will choose their answer again and it will once again be validated. Everything works fine, but it feels like I have a lot of repetition going on here. Since I'm new to this, I can't figure out a way to make this more concise if possible.

Just build an object with the associativity. 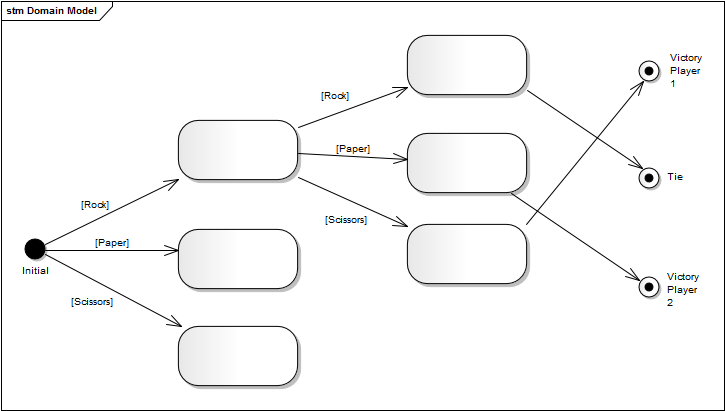 In this situation, we begin at the starting state, then follow the transitions for each player's move (not all transitions are shown).

Now it is a mathematical property of state machines such as this that they can be represented using a matrix (which we call an Array in computer science).

Now if we get the user's input as a number where rock is assigned the value of 0, paper the value 1 and scissors 2, we can look up the result of our operation using:

Now there are some nice things that are Javascript specific like dictionaries which make this a little nicer to read in code, but if you understand the fundamentals of this solution you will be able to solve any of this type of problem in any language.