I have just finished an assignment and would like to know what best practices I might be missing in my code. Any help would be hugely appreciated.

We only want to do this in the main guard, not when loaded as a module. It's really part of the test function, not the module.

We can use sum() for counting:

We might want to make a separate function for is_smiley(), simply to make the tests more specific. Also consider compiling the regular expression just once, using re.compile().

On the subject of tests, seriously consider using the doctest module, to keep your tests close to the code they exercise. That would look like this for the count_smileys() function:

As pointed out at stackoverflow, your method

for picking the next ball is rather inefficient. Your i goes through n values and the not in check for the list takes O(n) time, so this is O(n2) for just one ball, and O(n3) for the whole game (though I'm not familiar with Bingo, don't know how many balls can be picked without anybody winning and thus the game ending early or however that works :-).

You can reduce it to O(1) per pick, for example by keeping the remaining balls in a list, picking one from a random index, and replacing it with the last ball from that list.

There is nothing that can beat ord at this. Also, generally 0-based indexing (indexes start at 0) is more widely used in programming, this makes much more sense mathematically than 1-based indexing.

However, there are also two other offenders, the incorrect usage of list comprehensions, and importing a module inside a function.

And importing a module inside a function makes the module only known in the functions namespace, generally importing should be done at the top level of the module, so that name is globally known and all functions can use it.

However this will only work once, because after each output, the seed is reset so new outputs will be random, you have to reset the seed each time if you want non-random output.

And your original output is a str while you verify it against a tuple, the code will always throw AssertionError and it is indeed correct, str can never and should never equal a tuple.

random.sample always returns lists without duplicates (it will not sample elements with the same index twice), so just use it.

This is the fixed code:

Your original code will always fail at the last assertion: 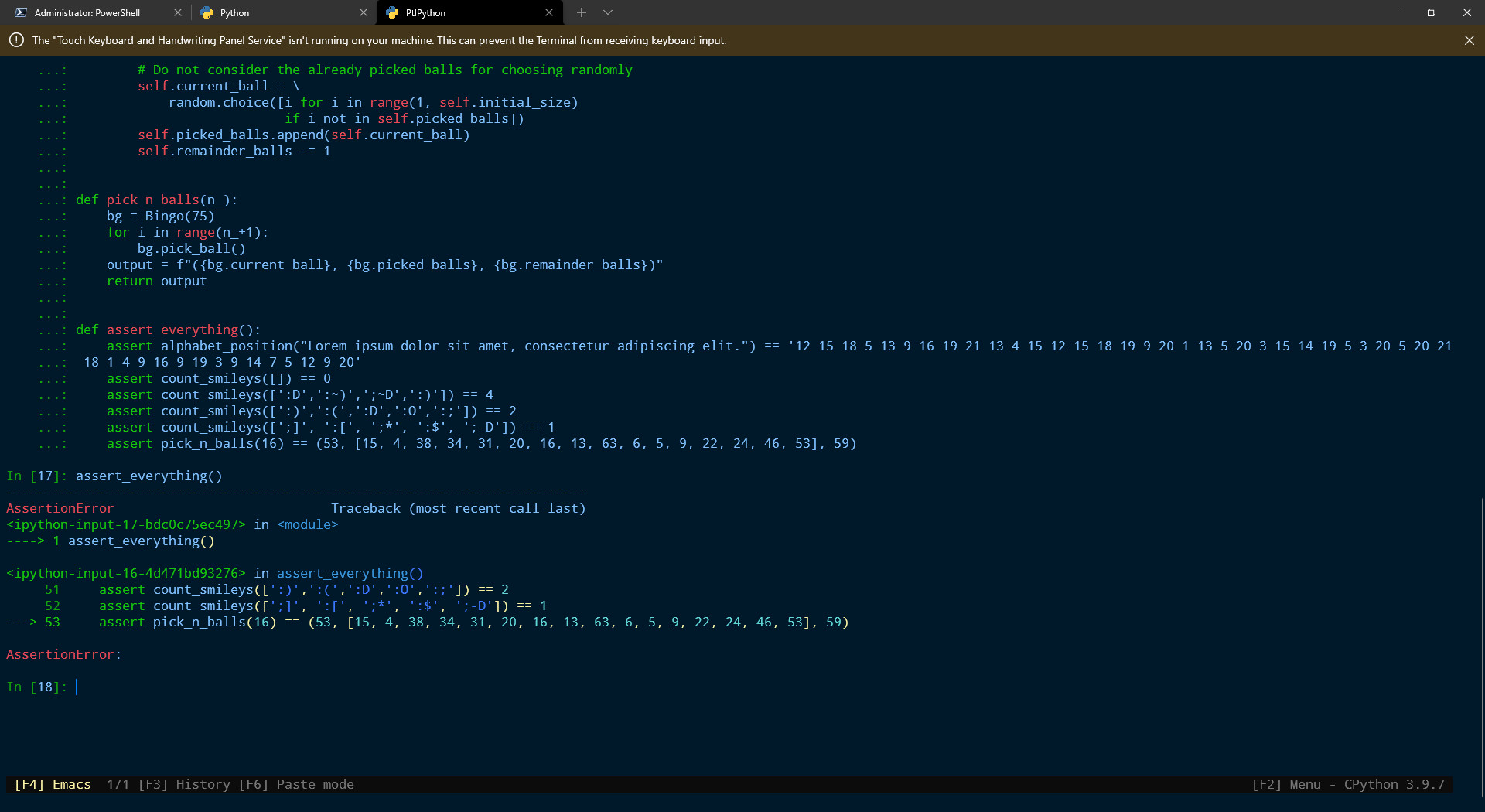 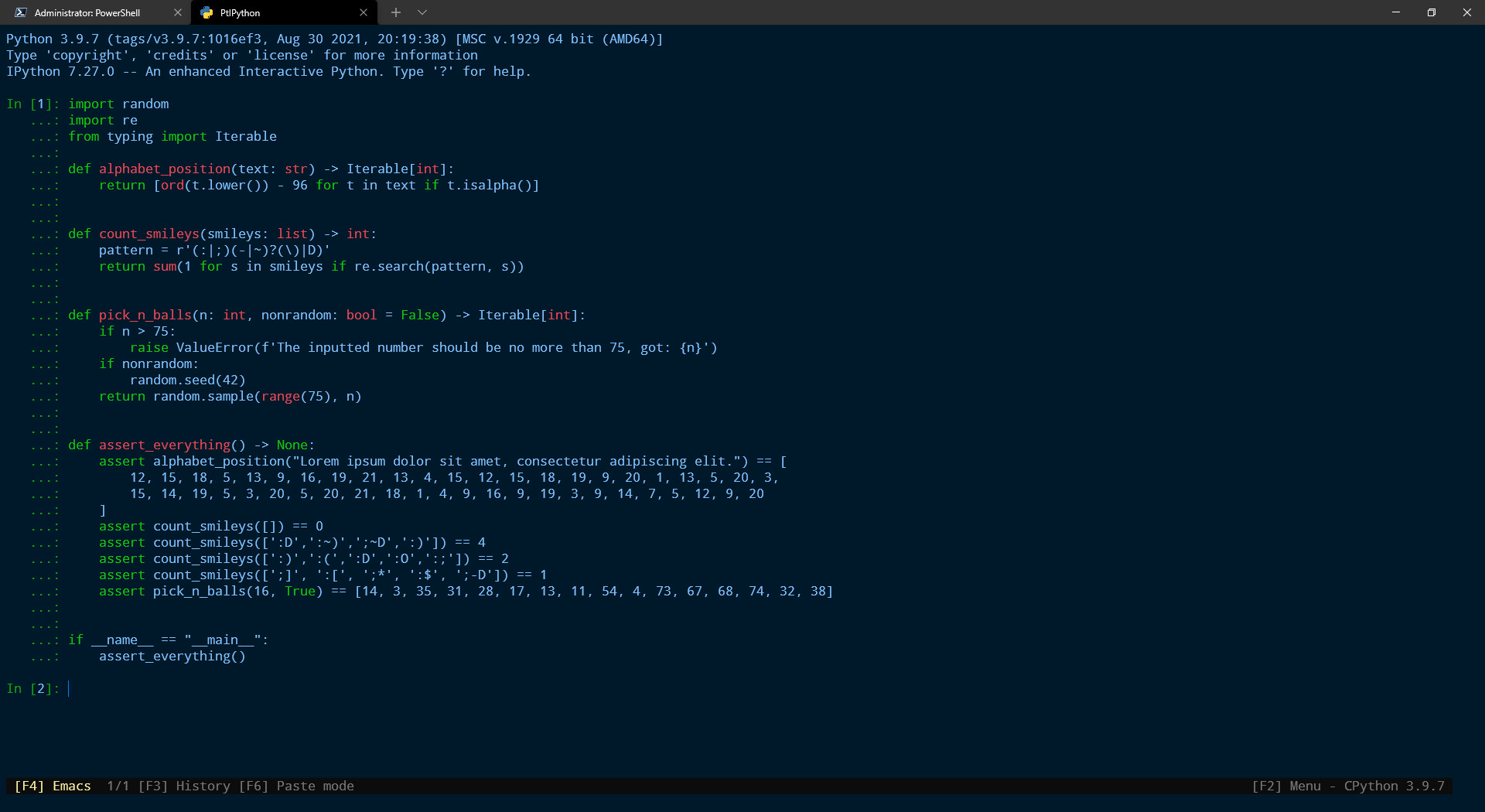 P.S., your method to identify smileys is oversimplified, your regex can only cover 12 possible variations, I don't know a lot about ASCII art however I am not convinced that you have covered every one of them.

And there are emojis and other pictograms depicting smiles defined within UNICODE, for example this character: U+1F600, and emoticons like this: ʘ‿ʘ, and your regex approach won't identify anyone of them.

Your definition of smileys is simply too narrow, I would recommend using neural networks for such task, as they are by far more suitable for this kind of task than regexes.

There can always be areas your definitions won't cover, something you cannot forsee, using a predefined set of rules will make the program produce the correct output when the input isn't covered in the definitions of the rules.

By using ANNs, rather than process predefined rules, your program learns to predict output for any input, it adapts to the training data, so it can produce correct output for inputs you didn't forsee.

7
Sorted unidirectional list with add, delete and find
4
Addressing possible strategic problems with LDAP module and unit testing code
25
Replacing letters with numbers with its position in alphabet
7
Python simple Class with sqlite and unit testing
3
find substring with count and return even frequency substring list
4
Find unique characters and count non unique characters
3
Testing Terminal Text Game with Classes and Game Loop
5
Find all numbers that are factors of one array and factor into the second array, then print their count