I was given the problem (called "car plate problem") to write all the values that go from AAA0001 to ZZZ9999 with the following premises:

So... I found a solution (posted below). It was "short" and "oh boy" it was weak! But I was coding against time so I had to go with that solution. I recognize the solution lacks creativity, better use of O.O. and probably there is a design pattern to be use here. None I could identify but still, there must be a better way to make it work. Is there a solution with better code quality and (if possible) less processing?

So I pass the value to setPlate(), get the "next plate" from getIncrementedPlate() and that value is passed again to setPlate() to generate the next plate.

Could anyone point how to improve it or show me a better improved version?

My current idea to improve the code:

All suggestions for improvement are welcome!

You correctly identified that your algorithm is a bit too complicated, so let's start from scratch.

You should note that the license plate is divided in 2 parts:

So, to start with, let's imagine that the requirement is to print the license plates. The simplest answer possible is nested loops:

That is the core algorithm, and it answers the question from an algorithmic perspective.

Now, consuming its output is maybe not that easy, so you should consider some way of:

Depending on your own affinities, you may favor some alternatives over others. Or whoever asked the question may.

The key, though, is to first work out the algorithm without worrying about the "packaging". Once you have the algorithm, you have a foundation you can build upon.

You are using a sledge-hammer to crack a peanut.

Allow me to repeat: single character strings. Why are you using strings to store single characters? Java has a char primitive type for storing characters. Moreover, there is a cheap function which turns a string into an array of characters: .toCharArray(). If you use that, you'll be dealing with a fraction of the number of heap-allocated objects, which will ease the burden on the garbage collector, plus all other manner of speed improvements.

Reinderien has the right idea. Implement an Iterable class, which can return an Iterator. Furthermore, instead of splitting a string into tiny single character chunks, and reassembling a new plate, you should use a StringBuilder object, which will allow you to efficiently mutate a string-like buffer to create new strings.

It may not be obvious, so I'll point out that in the above implementation, the initial license plate letters/numbers controls the pattern of license plates that are generated.

There is no need for any OO in this topic, and design patterns are totally out of scope for this. Your program is a little complex and could deserve some simplicity.

I believe that simplicity is always better, and what is simpler in your case than mapping a number to a license plate and simply increase your number to get the next one?

The only question is how to go from a simple number to the expected mapped license plate. As usual, there are various way to do so.

I suggest here one such way that will allow with simple loop to generate all of your license plates in logical order of the license plate.

And now, you can have a controller that calls any number with values between MIN_PLACE_SEQUENCE and MAX_PLACE_SEQUENCE (all inclusive), and just retrieve the appropriate license plate:

For instance, you could go for all of them:

Or you could fetch directly the values around some boundaries, just to check that everything works fine:

And an iterator isn't really hard as well!

Your problem statement is to create all of the possibilities, not necessarily to support increment from an existing possibility. The difference is very important. It's slow to parse out a position in the license plate space, increment it and format it again.

I think the first thing I would say is:

In this case you are working on the full String of the car plate and you have to break it apart to increment it. You could just as easily keep it split internally:

that would let you change the individual characters directly.

when forming this into the final output you can use something like:

to generate the final string in 1 go.

keeping the data in an intermediate form makes your code a lot easier to change at a later day. And often this is something you'll do in the future. the format your client expects is not the format it is kept in the database or in code.

this can work even when you get your data delivered using setPlate. when setPlate is called, transform the data into your internal form.

so in pseudocode, please don't use this bad method/variable names if you try this

this allows you to have

Of course it would work better if you made Plate into a class and use equals on it rather than on the string representation of it but I'm trying to keep each suggestion/option separate from any other suggestions.

I'm no Java dev, so my snippets use C#, but this should be easily translateable and the focus of this answer is on the class design rather than the specific syntax.

Note also that I opted for code that is as readable as possible, rather than tersely efficient. You can squeeze some more performance out of this by refactoring, but the main goal of this answer was to showcase the idea behind the design.

"Computer" is a word meaning "calculator". The reason I'm mentioning this is because computers are fast at math, but (relatively) slow at other things such as text processing. Breaking the calculation down to simpler mathematics will significantly boost processing speed.

Your code is written from your point of view on how words can be broken down in letters and put back together. But this is not the most efficient way to think about it in terms of CPU requirements. If we boil it down to a much more mathematical construct, we will be able to leverage the things that the CPU is very good and efficient at.

Let's look at another way of looking at it, the flip clock (click for animated gif): 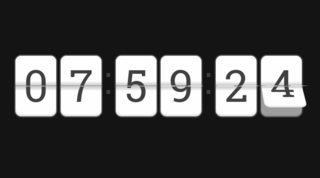 It's interesting to note here that this doesn't have to use all 10 digits. In a clock, the second-to-last digit only cycles from 0 to 5, because there is no 60th second in a minute.
This means that we can use an arbitrary amount of values in a given digit, for example 26, just like how many letters there are in the alphabet.

The snippet I'll show here is effectively going to rebuild that flip clock in code.

First, we'll look at an individual digit. We need to define how many values it can cycle across, and we need to tell it who its neighbor is, so that it can tell the neighbor to increment.

Forget about letters. We're only going to use numbers. In the end, we will translate a number value to a given letter character, but only after we've done the calculations.

This is really just the code equivalent of how I described how each digit in a flip clock works.

We need to make some subclasses here. The logic works as is, but some digits will need to be printed as numbers, and others as letters. In the above snippet, I already prepared for this by adding the abstract PrintValue method. Our derived classes are only going to implement logic on how to print the correct value. The counting logic itself remains untouched.

Notice how we've hardcoded the max values (9 for numbers, 25 for letters) in the classes themselves. Maybe you want to change that if you want more custom ranges like that 0-5 digit in a real clock, but for your current case this full range suffices.

Now, we're going to create a clock, which is effectively a group of connected flip digits. I know that you'll be calling this class LicensePlate, but I'm going to stick with Clock for now to stay close to the analogy.

If you want to prevent the entire clock rolling back to its start position, you could throw a custom exception when you've reached the end of the FlipDigit which has no neighbor:

In my answer, I will only suggest an efficiency improvement to the iterator:

(See this gist for the entire comparison program.)

The idea is to increment the rightmost character. If it’s already at its maximum value, set it to the minimum value and proceed to the character one step to the left from it. If the new character may be incremented, do that and halt. In case that 2nd character is at its maximum, keep going until a new valid plate number is found. Of course, we need to exclude from consideration every plate number ending in 4 zeros.

We know that there are 9999*26**3 possible license plates, so one strategy would be to just generate that many integers, and then translate each integer to a license plate. I don't work with Java much, so there are likely syntax errors, but this should give the gist of it:

Not the answer you're looking for? Browse other questions tagged java performance or ask your own question.